Who Owns The Satellite?

There are a handful of treaties which make up the space law that governs activities in space, including ownership of satellites and other non-natural objects. The main one is commonly called the Outer Space Treaty and has been ratified by all spacefaring nations. One of the articles in it states:

The article is saying that satellites in space fall under the jurisdiction and control of whichever nation’s registry it was registered in. Note the wording “A State… on whose registry an object… is carried”. That registry need not belong to the country from which the object was launched. For example, SpaceX recently launched the FORMOSAT-5 satellite to LEO (low-Earth orbit). This was done for Taiwan’s National Space Organization (NSPO). If the satellite was registered in Taiwan, which is very likely the case, then Taiwan has jurisdiction and control over it.

What if a meteor hits the satellite and knocks off some useful bits? The above Article VIII covers this when it says “Ownership of objects launched into outer space… and of their component parts, is not affected by their presence in outer space or on a celestial body or by their return to the Earth.” That “component parts” means even if the satellite has been smashed into many separate pieces, those pieces still fall under the registered nation’s jurisdiction, no matter where those pieces are.

The Law And Space Hackers

But if you’re a hacker living in a mile-long habitat in space, do these laws apply to you? We’re talking about a distant future so the best we can do is to try to apply the present-day treaties. Another article in the Outer Space Treaty includes the following:

The activities of non-governmental entities in outer space, including the moon and other celestial bodies, shall require authorization and continuing supervision by the appropriate State Party to the Treaty.

Let’s assume that you’re a citizen of a nation that’s ratified the treaty. In that case the “non-governmental entity” of the above article is you, and the laws of the nation you belong to apply, including the Outer Space Treaty. If taking what belongs to someone else is illegal in that nation then be prepared to face the consequences.

However, if the nation you belong to hasn’t signed the treaty, then that’s a dispute for the nations to handle. Or maybe you don’t belong to any nation, in which case it’s like the Wild West and the sheriff will be showing up shortly.

In maritime law, you’re allowed to salvage property lost at sea and are entitled to a reward. However, no such principle applies in space. As already pointed out, objects in space, even if defunct, remain the belongings of the nation that they’re registered with. But the important difference is that you’re not allowed to interfere with those objects without consent from the owners. That includes objects that would be considered space debris. 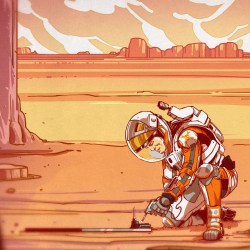 A relevant situation has already come up in the popular novel and movie The Martian. Stranded on Mars during a mission, Mark Watney needs to travel 2000 miles (3200 kilometers) from the NASA habitat he’s been living in, across Mars to the Schiaparelli crater. Once there, he’ll take control of a rocket, the Ares 4, that can get him off of Mars.

He’s aware of the Outer Space Treaty but instead cites maritime law. He then points out that in crossing Mars he’ll be leaving the habitat owned by NASA to travel in international waters to commandeer the Ares 4 rocket without permission. He concludes that he therefore is a space pirate.

However, in reality there is no concept of international waters in space law. Or rather there is in the Moon Treaty, but that’s considered a failed treaty, having been ratified by only a handful of nations, none of which have space launch capabilities.

Also, Mark Watney is an American citizen travelling from one NASA owned property, the habitat, to another NASA owned property, the Ares 4 rocket. He may or may not have permission from his employer, NASA, to enter the Ares 4, but if NASA doesn’t want him to then that’s a disciplinary issue between him and his employer and doesn’t make him a pirate. And if you’re familiar with the story, that would be just one of many disciplinary issues between NASA and the free-spirited Watney.

A Word Of Caution

The original idea for this article originated from a Mars One blog entry about Mark Watney. The author, [Steven Dufresne], does not have any legal training. If you are contemplating venturing outside in search of hackable hardware from defunct satellites, seek suitable legal counsel first. Wouldn’t it be amazing if this article was looked back on in 100 years in some early legal battle over space debris salvage though?

Or you can instead remain comfortable in your berth and read about the hardware hacking that Mark Watney did during his fascinating battle to survive on Mars. Alternatively, if you’re an Earther and looking for some historical legal topics, how about the struggle for the legal right to hack your own car.

41 thoughts on “Hack Space Debris At Your Peril”