“A TURNIP CURES ELVIS” begins the opening credits, an intriguing beginning to a smart and still timely film that was released around 25 years ago. If you’ve never seen the movie, I’m about to spoil the hell out of it.

While there is a fair amount of cheese in Sneakers, a lot of the problems the characters face — physical security and cryptography come to mind — remain the problems of today. Securing our digital business? Check. Surveillance? Check? Gray operators? Absolutely. At the same time, the movie does a good job of exploring different categories of hacker. The various characters seem to offer glimpses of people I see all the time at the hackerspace. Bigger than life, certainly, but they are in a Hollywood movie, after all.

Finally, the movie is just smart. Those opening credits offer a preview: the anagrams that begin the movie (“A TURNIP KILLS ELVIS” translates to Universal Pictures) are not just some art director’s conceit for the opening credits. The anagrams end up being important later on in the film, where there is a key clue hidden but if you think about it, shuffling letters on your Scrabble tray could be taken as a metaphor for hacker thinking — taking the same information as everyone else but looking at it in a different way.

The movie begins with Martin Brice and his friend Cosmo hanging out in their dorm room hacking the Republican National Committee and illicitly donating their funds to the Black Panthers. It is 1969 and the guys pack a decade-early PC featuring inexplicably anachronistic 40-column text as they do battle against the squares on an as-yet-unimagined Internet. They’re hippie hackers, man.

In a fateful turn of events, Cosmo is busted while Brice, saved due to making a noms run, flees to Canada. Fast forward to the littering future of 1992 and the Sneakers are pen-testing a bank. They have that joint owned from top to bottom, and break in to add money to an account they plan on closing the next day.

Martin Brice has grown up into Martin Bishop, who comes across very much like Robert Redford playing a hacker. But it works. Martin is a man of action who relies on his crew for specialist knowledge but is content to do most of the dangerous stuff himself. Backing him up is a lovable cast of hacker subclasses, including conspiracy-theorist and AV nerd Mother, played by Dan Aykroyd who basically re-channels Ray Stantz from Ghostbusters to good effect. Sidney Poitier plays himself, if Sidney Poitier were an ex-Company security expert. He’s the least exciting person in the group but has an encyclopedic knowledge of security hardware, and can rock a spec sheet like no one else. 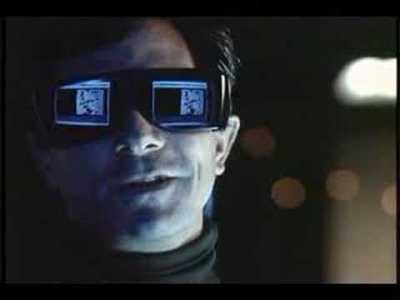 Supreme audio ninja Whistler steals the show. There have been so many blind mystics in movies it’s easy to think that he’s just a recycled character. But the fact is that Whistler is pretty much lifted out of the annals of hacker lore. I’m not saying the real Joybubbles could identify a fire exit by the sound of the alarm batteries recharging, but it’s damned plausible. The fact that Whistler is tricked out with an interactive Braille display with the dots actuating in realtime doesn’t hurt. He’s kind of a deus ex machina character, but the real Joybubbles invented the 2600 Hz hack and paid for a vacation to read Mister Rodgers’ Neighborhood scripts by sniffing pig manure. In the movie Whistler’s skills are constantly helping out Bishop, but he’s based on a guy who really did have amazing skills.

At the end of the pen test Bishop shares with the bank’s board how sucktastic their security seems to be, and dutifully returns the $100K the Sneakers purloined in their fake heist. Yet their honorarium is so lame that the bank’s secretary makes a scornful comment. Such is the weighty responsibility of a white hat hacker, imbued with the level 20 myrmidon skills that would beggar those skinflint bankers, yet forbidden by their code of honor to misuse their very same skills.

But then the evil suits arrive and everyone’s short-lived relief at the successful bank job is subsumed by the possibility of making more dough working for the suits.

I’m not sure how Liz gets her money. She has a hollywoodesque apartment in rich-people San Francisco and has a job giving music lessons, while attending lectures on advanced number theory. I’m thinking she has some killer patents she’s sitting  on. 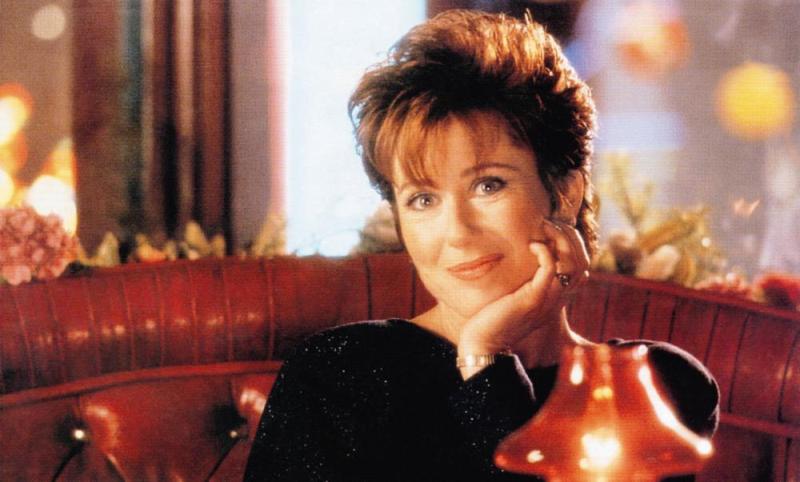 This movie was in fact put out in 1992 and there are agency problems with Liz. She mostly is there to get in danger and for Bishop to impress so she’ll go out with him. There’s another woman character with lines, but she’s someone else’s love interest. You can pretty much forget about the Bechtel test. Bishop is always interrupting her and she spends a lot of the movie looking exasperated that the Sneakers have spread their equipment over every horizontal purpose of her apartment. In this respect this is a true and accurate side effect of having hacker friends. Liz comes into her own when she plays the role of social engineering expert in taking down hapless nerd, Werner Brandes. An evil toy designer for EvilCo, Brandes inflicts his tepid game on Liz while she gets him to speak all the words of the password to get into secured office. Later on in the movie she grabs a pistol off the floor and shoots a warning shot into the ceiling tiles. Now, that’s more like it — a little more Jackie Brown, you might say. 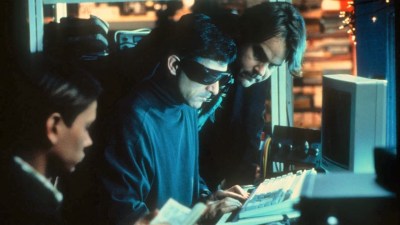 It is true that Sneakers contains a number of elements that may have been fresh in 1992 but certainly aren’t now. Climbing through air vents and slapping on security-penetrating dongles with red LEDs on them may once have been sweet but has lost its punch. The computer displays are laughable by today’s standards, with the Macintosh System 7 chrome not maintaining the cool factor over the years. The “heist” elements have been done and redone for decades.

However, hacking isn’t about your screen resolution or even having a screen. Some of the best techniques over the years don’t involve any technology at all, and we get to see them in the movie. When Bishop social engineers his way past the a security gate by pretending to be in a hurry, he doesn’t need anything but a harried guard and bunch of balloons to sneak through. The fact that he can pass as a suit doesn’t hurt.

The signature scene in the movie involves a reveal when we find out what Setec Astronomy stands for. The scrabble reveal is one of the best scenes in cinematic history — Bishop and Liz ply their right brains to descramble Scrabble tiles while Mother, Whistler, and River Phoenix connect the thing to the Internet and work their left brains — they arrive at the “we’re in over our heads” moment at the same time.

More than anything, the movie celebrates lateral thinking, solving problems by coming at them from an unexpected direction. When Bishop encounters a lock he hadn’t anticipated, rather than try to hack it they have Bishop simply kick it down. In another brilliant scene, Whistler helps Bishop remember how to get to EvilCo by playing the sounds of his trip, with Whistler working a sick Braille interface on his Moog and sequencer to help re-create road sounds.

The movie mostly gets these small and large details right. It’s a celebration of hacker thinking, of people who make society better while maintaining enough of a separation to keep that outsider’s mindset. 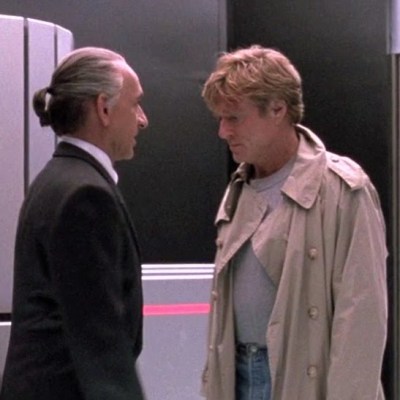 The movie did its homework. First off, the main writers were the guys from WarGames, which is another hacker movie that got a lot of details right. According to Wikipedia, cryptologist Leonard Adleman (The “A” in RSA) was a consultant for the film and composed all of the slides in Janos’s cryptography preso in Palo Alto. Sometimes in a movie — hell, a lot of the time — the technobabble is fake. Those of us who grew up in the ’80s and ’90s recall frantic engineers rerouting the plasma injector through the phase variance field to save the day. So for the filmmakers to actually study mathematics and cryptography enough to hire an expert in the field, well, that’s pretty cool.

But I think what this movie does really well is shows the hackers in all their complexity. You have stiff-ass Werner Brandes, the guy who folds his trash and has a PhD in robotics. There’s kooky surveillance guy and comic relief Mother, played by Dan Aykroyd. I met a lot of people at the hackerspace who are only somewhat able to interact with society. The space is almost a buffer against normal people. I see Mother’s brilliance and kookiness in a lot of those folks.

Evil Cosmo and saintly Bishop are another pairing — they illustrate the two paths of evil and good, at least in Bishop’s worldview. The evil hacker Cosmo follows the path of lucre and power-grubbing and becomes a puppet of organized crime. Bishop uses his knowledge to help society, backed up by his crew of brilliant misfit hackers. They don’t want anything — nothing really, random stuff. Mother wants a Winnebago. But they certainly don’t want the power and the attention it attracts.

In the end, of course, they don’t really turn the Ark over to Warehouse 13, either. Bishop hoodwinks the NSA by keeping the thing, or at least the main IC of the thing, so that he can re-engineer the full on thing and use his newfound powers to right wrongs and only hurt people he felt deserved it. The pat Hollywood ending isn’t really important compared to the fantastic characters and great dialog of the movie’s hackers.

62 thoughts on “Sneakers: A Love-Fest”