As an avid fan of the show Dr Who, [Adam Sifounakis] saw a model for a laser-cut TARDIS that piqued his curiosity that eventually grew into a multi-week project involving multiple setbacks, missteps, revamps and — finally — gratification. Behold, his sound activated TARDIS.

First and foremost, assembling and painting the model was a fun puzzle — despite a few trips to the store — with a little backtracking on the painting due to impatience. Next, the creation of a pulsing soft white LED circuit timed with an audio clip to really sell the image of a mini-TARDIS proved to be a tedious ordeal, paying off in the end with a satisfying glow through the vellum-diffused windows on the model.

How to trigger the lights? [Sifounakis] initially wanted a capacitive sensor to trigger the sound effects, but that way lay dragons — and madness — so he went with snap-activated effect to activate the TARDIS like the Doctor himself. After struggling with building his own microphone setup, he switched to an electret mic with adjustable gain which worked like a charm. Setting up this TARDIS’ Adafruit Pro Trinket brain involved a snag or two, and after that it was smooth sailing!

Until he hit another hitch with the power circuit too, that is. Luckily enough, adding a capacitor to give the circuit a bit more juice on boot solved the issue. All that was left to do was dismantle and rebuild his circuit after all this troubleshooting and substitutions, and — finally — install it in his model.

With much satisfaction and a final rework of the LED pulsing effect, it was done. Check it out!

END_OF_DOCUMENT_TOKEN_TO_BE_REPLACED 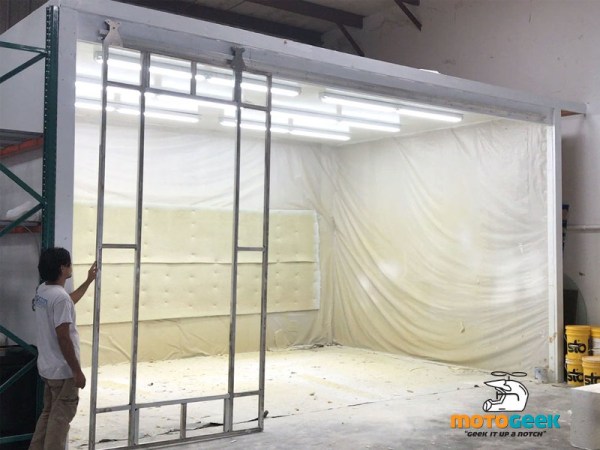 [MotoGeeking] built a giant spray booth and is in the process of making customized, air-filtering barn doors for it. When it came to buy hardware to move the doors, though, he found all the ready-made options to be prohibitively expensive. You know what comes next: he designed barn door hardware from the ground up, and did it as cheaply as possible.

After intensely studying many images of barn doors and hardware, [MotoGeeking] decided on the right wheels and went from there. Kick scooter wheels fit the bill nicely, since they are designed to support a lot of weight and come with their own bearings and spacers. And they’re cheap, too — just $9 for a pair.

[MotoGeeking] found some C channel extruded aluminium that seemed to be a perfect match for the wheels, but the wheel was quick to bind whenever it touched the sides. He solved that one by epoxying a length of round bar into the bottom corners. This allows the wheel to move freely while forcing it to stay centered in the track.

In designing the 1/4″ aluminium brackets, [MotoGeeking] took a measure thrice, order once approach to selecting the fasteners. You probably know by now that McMaster-Carr has free CAD drawings for every little thing. [MotoGeeking] imported the ones he liked into Illustrator and built around them. This helped him get it right the first time and kept the headaches and hair-tearing away. Watch the giant door skeleton glide effortlessly on its track after the break.