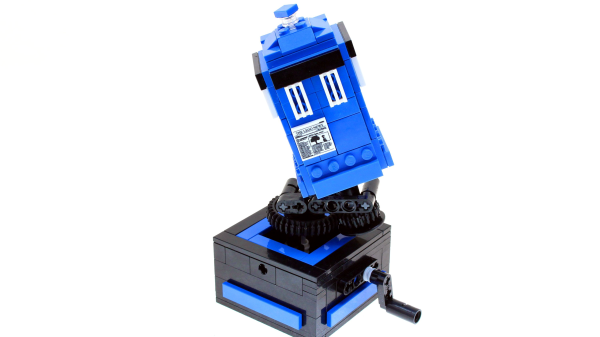 Using LEGO Technic gears and rods seems like a great way of bringing animation to your regular LEGO creation. Using gears and crank shafts you can animate models from your favorite TV show or movie like LEGO kinetic sculpture maker, [Josh DaVid] has done when he created a spinning TARDIS.  Crank the handle and the sculpture spins through space and time.

The large gear stays in place. The hidden gears, turned by the crank, rotate a shaft from below that goes through the large gear making the TARDIS rotate around the main axis. Connected to the TARDIS model is a smaller gear, at an angle, that meshes with the larger, stationary, gear. This smaller gear is what causes the TARDIS to rotate around its own axis while the whole thing rotates around the main axis. If your hand gets too tired, you can substitute a LEGO motor.

It’s a neat effect, and you can get the plans [Josh]’s Etsy page. The best part, however, is that you can get a set with all the parts as well! The TARDIS is a popular item here and we’ve had plenty of projects with it as the focus: Everything from a tree topper to sub-woofers. The only question we have, of course, is, ‘Is it bigger on the inside?’

END_OF_DOCUMENT_TOKEN_TO_BE_REPLACED 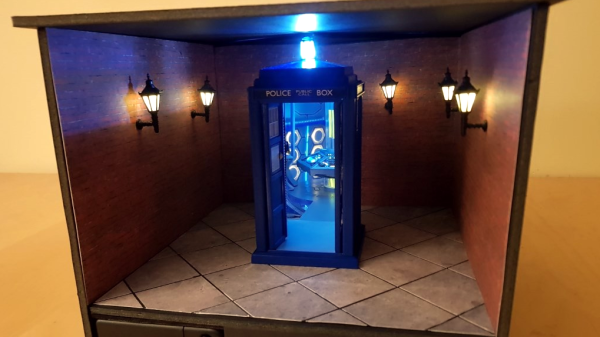 The build looks great and the illusion works very nicely in the video. Check out the video after the break, and then check out the “how it’s done” video for an explanation. END_OF_DOCUMENT_TOKEN_TO_BE_REPLACED

As an avid fan of the show Dr Who, [Adam Sifounakis] saw a model for a laser-cut TARDIS that piqued his curiosity that eventually grew into a multi-week project involving multiple setbacks, missteps, revamps and — finally — gratification. Behold, his sound activated TARDIS.

First and foremost, assembling and painting the model was a fun puzzle — despite a few trips to the store — with a little backtracking on the painting due to impatience. Next, the creation of a pulsing soft white LED circuit timed with an audio clip to really sell the image of a mini-TARDIS proved to be a tedious ordeal, paying off in the end with a satisfying glow through the vellum-diffused windows on the model.

How to trigger the lights? [Sifounakis] initially wanted a capacitive sensor to trigger the sound effects, but that way lay dragons — and madness — so he went with snap-activated effect to activate the TARDIS like the Doctor himself. After struggling with building his own microphone setup, he switched to an electret mic with adjustable gain which worked like a charm. Setting up this TARDIS’ Adafruit Pro Trinket brain involved a snag or two, and after that it was smooth sailing!

Until he hit another hitch with the power circuit too, that is. Luckily enough, adding a capacitor to give the circuit a bit more juice on boot solved the issue. All that was left to do was dismantle and rebuild his circuit after all this troubleshooting and substitutions, and — finally — install it in his model.

With much satisfaction and a final rework of the LED pulsing effect, it was done. Check it out!

END_OF_DOCUMENT_TOKEN_TO_BE_REPLACED 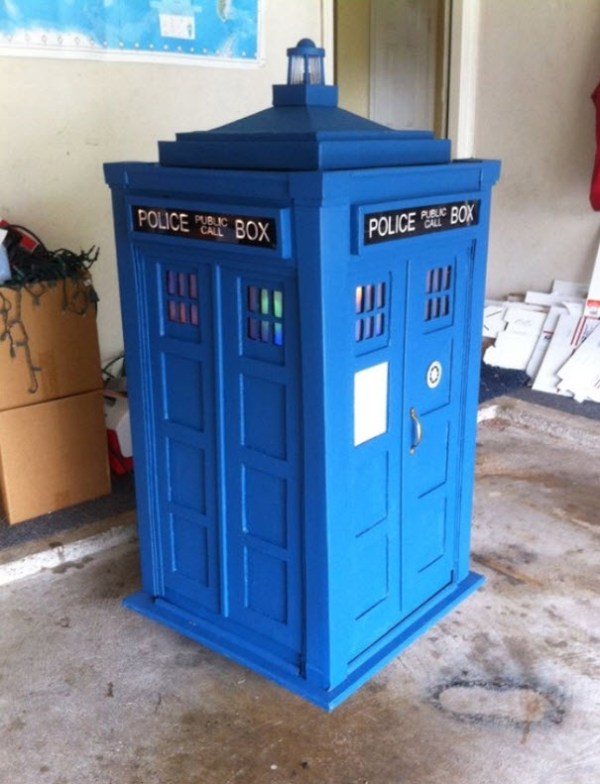 In honor of the recent 50th anniversary of Doctor Who, [David Prouty] decided to build a 1/3rd scale replica of the Tardis. He also decided to give it a few extra features on the inside… Introducing the Recycled Tardis Jukebox!

It was constructed primarily out of recycled cardboard boxes (pizza, FedEx, UHaul, etc) and [David] has done an amazing job painting and detailing it!

Since it’s so big, [David] wanted it to be functional too, so he’s added Bluetooth speakers, sound activated lights, disco balls, and even a fog machine on the inside. It’s all controlled wirelessly by remote, and it’s sure to be a hit at any party he decides to throw.

Stick around for the videos showing it in action — and of course, making our favorite sound VWORRRRRP VWRORRRP VWORRRP!

END_OF_DOCUMENT_TOKEN_TO_BE_REPLACED Motion sensors are pretty useful — but they’re just so darn ugly! Well — if you’re a Whovian — maybe this hack is for you. A 3D printed TARDIS Motion Sensor Alarm!

[Malcolm] has a home security system that uses a series of motion sensors to detect movement in the house. When movement is detected an indicator LED turns on, and a wireless signal is sent to the main control system. So after discovering a nice 3D model of the TARDIS (Time and Relative Dimension in Space) on Thingiverse, he decided to see if he could hack one of his motion sensors to fit inside of it instead.

As it turns out, it was as simple as removing the sensor’s external shell, 3D printing a few support pieces inside of the TARDIS, and soldering on a bright blue LED to replace the dinky indicator light. Simple, but effective!

Don’t forget to check out the following video. Allons-y!