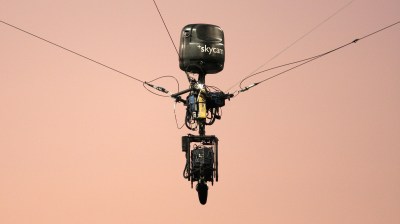 Forget merely room sized — Skycam is the brand-leader of stadium sized cable bots. If you’ve watched any NFL you’ve seen the camera robots that zip overhead, following the action from close up thanks to a gimbal-mounted camera.

Each reel is controlled by its own computer, with a two-operator control rig centering around a Linux box. The 600-lb cables are kevlar-jacketed optical fiber and copper, and addition to moving the camera module (the “spar”) the wires transmit power and data. The 3.4 kW motors are equipped with encoders that ensure 1/100th of an inch in resolution.

If anything would tell you that cable bots scale up insanely it should be Skycam. What’s next? City-sized cable bots? World-sized CNC? 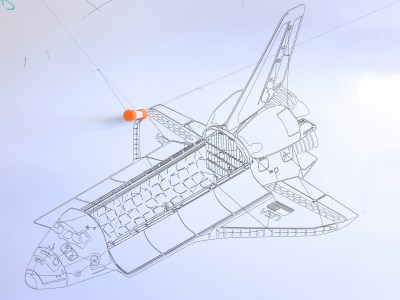 Way at the other end of the spectrum are two-stepper drawbots sometimes known as polargraphs or hanging v-plotters. They consist of a pair of stepper motors with reels controlling strings hanging down, with a module at the bottom equipped with a pen. Gravity provides tension, allowing the polargraph to make surprisingly precise lines.

Despite Trammel’s great results, it’s actually quite a simple rig; the project uses a TinyG CNC controller with two random steppers found at NYC Resistor. A polargraph’s toolhead can be made with nothing more complicated than a sharpie with a servo attached to it with a binder clip — the servo’s horn simply pushes back against the work surface and lifts the pen off of it. However, he went even simpler and his toolhead is simply a 3D-printed sleeve for a dry erase marker — no lift mechanism, so the drawings always include stray lines where the pen was moved. Check out Trammell’s web site to follow along with the Polargraph project, as well as assets on Flickr and GitHub.

The drawings in this post were created by Hackaday regular [Trammell Hudson]. His simplified polargraph uses a 3D-printed pen holder that has no lifting mechanism — the G-code just calls for the pen to draw from one point to the next even if that results in stray lines. [Trammell] has explored using his drawbot to make mathematically modeled patterns, like the space-filling Gosper and Hilbert curves, a visualization of a Lorenz attractor, and even mapping sine waves. My favorite is the wall-sized map of Paris.

Despite [Trammel]’s great results, it’s quite simple; the project uses a TinyG CNC controller with two random steppers found at NYC Resistor. In fact, a polargraph can be quite simple. Its toolhead can be made with nothing more complicated than a Sharpie with a servo attached to it with a binder clip — the servo’s horn simply pushes back against the work surface and lifts the pen off of it. Check out [Trammell]’s web site to follow along with the Polargraph project, as well as assets on Flickr and GitHub. 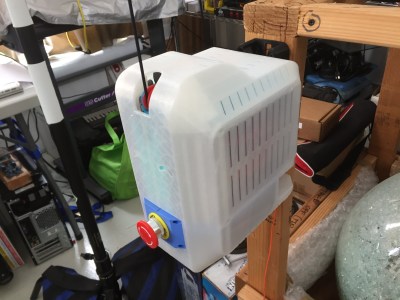 [Micah]’s YouTube videos focus on her expertise in mechanical and electrical engineering, plus a lot of kitty shots, so a 3D-printed, cable-bot flying camera rig is just the ticket.

The project includes a lot of great details, like her refurbished camera gimbal and the from-scratch winches, one of which can be seen to the right. In many cases she stores the electronics inside the infrastructure, making for a very elegant build.

It doesn’t appear that the project is at the “moving stuff in the air stage” so follow the project on Hackaday.io to keep up with the latest developments.

The toolhead keeps low and level thanks to a “Super Gravity Pole”, a yard-long steel pole that anchors it; otherwise it would want to fly around uselessly. This highlights the fact that gravity as a tensioning element is part of what makes cable bots as simple as they are — otherwise you’d need more cables pulling down on the end effector.

But what happens if you do just that? I haven’t seen many hobbyist-level projects involving 6-motor cable bots but there are a few commercial products they are quite simple, incredibly fast, and scarily precise. I want to close out this piece by sharing an insane cable bot project, the CableEndy. It was [Andrej Rajnoha]’s master’s thesis at Brno Institute of Technology, and it packs some pretty insane specs — just to name a couple, it accelerates the toolhead at 10 G, and with 1 mm precision.

30 thoughts on “Cable Bots, Arise! Domination Of The Universe Is At Hand”