Next week we’ll be at a few awesome hardware meetups around the Bay Area, and we want you to head out and join us. 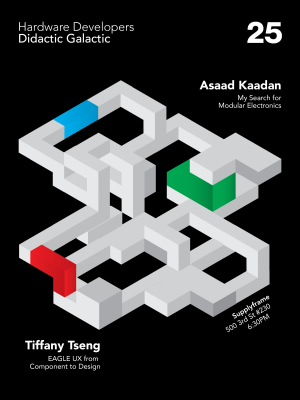 The first meetup will be the Silicon Valley Hardware Meetup at the Evil Mad Scientist shop in Sunnyvale. It’s going down Wednesday, December 6th, from 6:30 until 9:30. At least some of the Hackaday/Tindie/Supplyframe crew will be there, and the night will be filled with lightning talks, demos, and the cool hardware people you know and love.

Speakers for this meetup will include [Mitch Altman], hacker extraordinaire and owner of far, far too many TV remotes. He’ll be talking about hardware successes and failures in his own businesses. Also headlining the event will be [Clarissa Redwine] from Kickstarter. She’ll be talking about crowdfunding hardware, and the fact that making a thousand of something is a million times harder than making one of something.

The day after, on December 7th, we’re also going to be opening the doors at the San Francisco Supplyframe office to host the Hardware Developers Didactic Galactic. These Didactics are fun and popular, and you don’t need to go to the South Bay. Food and drink will be served, and there’s a sweet Rick and Morty mural in the alley across the street.

On deck for this month’s Didactic is [Tiffany Tseng], lead UX designer at Autodesk. Her work involves creating and implementing the design decisions that go into Eagle CAD. If you’re wondering why the icons changed a few years ago, she is not the person to talk to; that happened before the Autodesk mothership bought Eagle. If you’re wondering how the awesome push and shove routing actually works, [Tiffany] is the person to talk to.

Also at the Didactic will be [Asaad Kaadan]. He’s a robotics engineer working on cinematic tools for his day job and is currently exploring a very, very cool modular electronics project called Hexabitz. He’ll be talking about Hexabitz and designing for modular electronics.