She suggests starting with the “inside” of the design. This is where the psychological triggers begin. Does the creature have needs, does it have a purpose? Humans are used to recognizing other living things and they all have internal forces that drive them. Including these in your designs is the foundation for lifelike behavior. 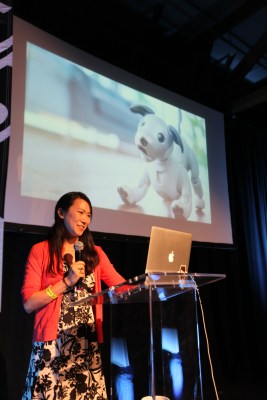 The outside design must match this, and this is where Christine has advice for avoiding the Uncanny Valley — an emotional reaction to machines that look almost too real but some cue breaks the spell. She suggests using combinations of critters as the basis for the design so as not to be locked into strong associations with the living things used as the model. The motion of the robot should be carefully designed to use acceleration that makes sense with the biological aspects of the robot and the task it’s performing. Think about how jerky, unnatural motion is used in horror movies to elicit fright — something you don’t want to recreate in a robot companion.

Her last parameter on successful biomimicry design is “dissonance”. This is perhaps the most interesting part. Humans will have expectations for living things, and expectations for machines. Trying to completely hide that machine side is a mistake. Christine uses the new Sony Aibo “pet” robot as an example. It behaves like a lovable dog without the unpleasant parts of pet ownership like house training and being around to feed it. The thing that Sony is likely missing is doing amazing “robot things” with the new robot pet. As Christine puts it, they kind of stopped being creative once they implemented the “low tech meat dog” behaviors.

Don’t miss Christine Sunu’s full Supercon talk embedded below. She has also published her talk slides and you can learn more about what she’s working on by checking out her website.