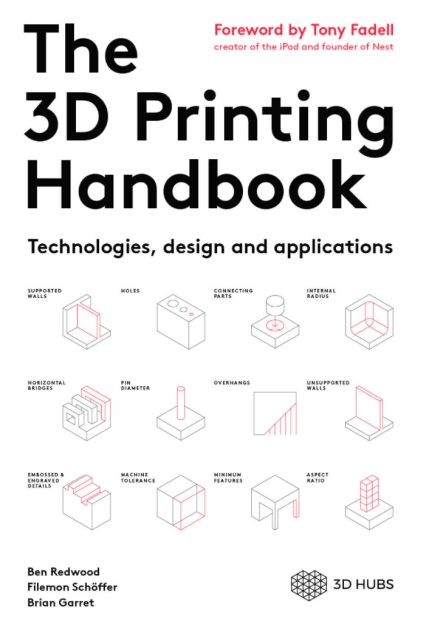 There have been dozens of books published as a guidebook to 3D printing over the years, and some of those are even in their second edition. Yes, despite the disappearance of 3D printers from the headlines of TechCrunch, and despite the massive public disillusionment of computer-controlled hot glue guns, there are still people that want to learn about 3D printers. There’s actually a market for 3D printing guidebooks, and people are buying them.

The latest such guidebook for 3D printing is The 3D Printing Handbook from 3D Hubs. 3D Hubs has been around for a while, and can best be described as, ‘3D Printing as a Service’. The usual use case for 3D Hubs is that someone would upload a 3D model to 3D Hubs, and get a quote from someone with a 3D printer. This quote could come from a professional 3D printing outfit with machines that cost more than a house to someone with a LulzBot or Prusa in their garage. 3D Hubs is going to be fantastic when people realize you can do CNC milling on the service as well.

This book was written by Ben Redwood, Filemon Schöffer, and Brian Garret, all employees of 3D Hubs. In one way or another, 3D Hubs has a hand in every conceivable type of 3D printing technology, and this book aims to be an introduction to the uses of these technologies, and a guidebook on how to use 3D printing technology the right way. There’s a question with this book: does it live up to expectations, and for that matter, can any book live up to the expectation of being a ‘guide to 3D printing?’

How Do You Write A Book On 3D Printing?

3D printing is the most accessibly complex technology you’ll find today. The depth of knowledge required to work on a modern car is much greater, but in reality, very few people are going to reprogram their fuel injection system for their daily driver. A computer is thinking sand, but someone who wants to do the Facebooks doesn’t need to know what a register is. 3D printing is different. You actually need to know the interplay between nozzle diameter, stepper motor angles, and filament diameter to create a good print. A 3D printer is really only a stack of dozens of variables, all related to each other, that must be balanced to print out a nice copy of a low-poly Pokemon or fidget spinner. Is it even possible to write a single volume that covers all these variables, the interplay between them, and is a good guide on how to create a nice print on a generic 3D printer? Is it possible to do that while including non-filament-based machines?

Let’s use filament diameter as an example. Why are there two different standards for filament diameter? Nearly everyone has had their say on the matter, but the engineering decisions that go into choosing one filament diameter or another are interesting. For instance, 1.75 mm diameter filament can be extruded faster — more length for a given volume — and the higher surface to volume ratio means it heats up faster in a hotend. Why would anyone choose a larger filament, then? Legacy — the first RepRaps used plastic welding rod, which was provided in 1/8th inch diameters, or really close to 3 mm. This entire discussion over filament diameters brings up thermodynamics, the history of the RepRap project, and material science.

This is the problem any book on 3D printing has to contend with. There is simply so much material, so many different ideas and opinions of equal validity, so many ways of doing things, that simply mentioning all of these ideas would fill two volumes. Never mind actually explaining all of these ideas and techniques in sufficient depth. Add in the demands of modern publishers, like pull quotes — the words you’re forced to read twice — and you’re left with a publication nearly devoid of content.

Left with that observation, how exactly do you write a book on 3D printing? The easiest, simplest, and the idea that can be most simply outlined to an editor that knows very little about 3D printing is a survey of technologies. A book on 3D printing can simply list the different types of 3D printing technologies and their capabilities. Dedicate one chapter to filament-based printers, but be sure to call them ‘FFF’ printers, because techies and geeks love pointless acronyms lacking any meaning. Spend another chapter on resin-based printers, but be sure to delineate between stereolithography and printers based on video projectors, again because the 3D printing community is fixated on pointless nomenclature.

What the Book Covers, and Why It Covers It

The 3D Printing Handbook does cover every 3D printing technology. You’ll find examples of how to use filament-based machines, an explanation of how laminated paper can be turned into 3D printed objects, and a description of how electron beams can be used to make parts out of metal. This is what anyone should expect from a book introducing anyone to 3D printing.

While this is not a textually dense book — I’m ascribing that to modern book design practices where whitespace is considered content — it does cover the basics of every 3D printing technology. This is a book that will tell you printing large, flat panels in ABS isn’t a great idea, and you should use PLA instead. This book will tell you the tolerances and resolution you should expect from electron beam lithography.

However, this is not the book you want if you’ve just bought your first filament-based 3D printer. There is no coverage of toolchains, there is no mention of how to create a 3D model, and you won’t learn that OpenSCAD is one of humanity’s crowning achievements. Here, we get into the reason this book exists, and who this book is written for.

This book was written by 3D Hubs, a company whose focus is ‘3D Printing as a Service’. To that end, this is not a book written so the reader can get a 3D printer up and running, calibrated, and start producing good parts. This is a book about the technologies behind 3D printing, and how to order a 3D printed part. This isn’t a dig at the authors; this is simply a guidebook on how to use a 3D printing service. In The 3D Printing Handbook, your expectations will be modified to suit reality, you’ll get an idea of what 3D printers can do, and you’ll be able to order a part.

Through that lens, this is a fantastic book. Even though anyone can simply buy a filament-based machine for less than $200, a lot of people won’t. 3D printers are work, and it takes time and patience to learn how to print a part. Most people will not, and should not, own a 3D printer. In the absense of a CNC hot glue gun on every desktop, 3D Hubs is a very capable 3D printing service, and this is a handbook on how to use the service.

There’s a Publishing Lesson to Be Learned Here

Issues like inventory, the physical weight of a carton of books, and planning inside a publishing company are well outside the purview of a book review, and in this case, it really doesn’t matter; you can buy The 3D Printing Handbook as an e-book, and delivery is as simple as sending a few electrons down a wire.

For the print version of this book, something went seriously, seriously wrong. This book is only sold through one seller on Amazon — Carl Flower — and his seller reviews do not bode well for his future as an Amazon storefront. The print version of The 3D Printing Handbook is unobtanium at this point, with second-hand copies being offered for as much as $195 USD. I urge you not to spend that much. This review is based off the e-book version. I assume the hardcover I ordered will arrive eventually. Whatever happened with the distribution, someone screwed up. I look forward to the post on Medium regarding this issue.

Despite the problems with the distribution of this book, it is a very good resource for anyone interested in 3D printing. No, it’s not a user guide on how to use your new, shiny Prusa, but that’s not the point. This is a book on what to expect from a 3D printing service, what is actually possible through different 3D printing technologies, and how to use those technologies to finish a project. In that regard, this is an excellent reference volume, and one that belongs on any burgoning maker’s bookshelf.

12 thoughts on “Books You Should Read: The 3D Printing Handbook”