Surely, if you’re reading this website you’ve teased the thought of building your own 3D printer. I certainly did. But from my years of repeated rebuilds of my homebrew laser cutter, I learned one thing: machine design is hard, and parts cost money. Rather than jump the gun and start iterating on a few machine builds like I’ve done before, I thought I’d try to tease out the founding principles of what makes a rock-solid machine. Along the way, I discovered this book: Exact Constraint: Machine Design Using Kinematic Principles by Douglass L. Blanding.

This book is a casual but thorough introduction to the design of machines using the method of exact constraint. This methodology invites us to carefully assess how parts connect and move relative to each other. Rather than exclusively relying on precision parts, like linear guides or bearings, to limit a machine’s degrees of freedom, this book shows us a means of restricting degrees of freedom by looking at the basic kinematic connections between parts. By doing so, we can save ourselves cost by using precision rails and bearings only in the places where absolutely necessary. 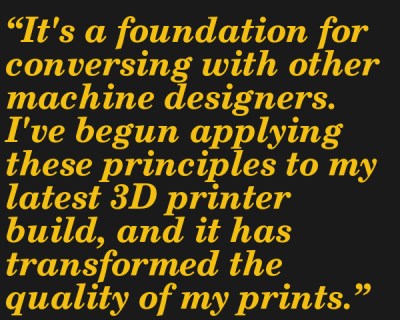 While this promise might seem abstract, consider the movements made by a 3D printer. Many styles of this machine rely on motor-driven movement along three orthogonal axes: X, Y, and Z. We usually restrict individual motor movement to a single axis by constraining it using a precision part, like a linear rod or rail. However, the details of how we physically constrain the motor’s movements using these parts is a non-trivial task. Overconstrain the axis, and it will either bind or wiggle. Underconstrain it, and it may translate or twist in unwanted directions. Properly constraining a machine’s degrees of freedom is a fundamental aspect of building a solid machine. This is the core subject of the book: how to join these precision parts together in a way that leads to precision movement only in the directions that we want them.

Part of what makes this book so fantastic is that it makes no heavy expectations about prior knowledge to pick up the basics, although be prepared to draw some diagrams. Concepts are unfolded in a generous step-by-step fashion with well-diagrammed examples. As you progress, the training wheels come loose, and examples become less-heavily decorated with annotations. In this sense, the book is extremely coherent as subsequent chapters build off ideas from the previous. While this may sound daunting, don’t fret! The entire book is only about 140 pages in length.

Beyond the methods introduced in the book, the author peppers it with anecdotal wisdom that clearly comes from the mindset of a seasoned machine designer. Blanding spares no expense at reintroducing familiar parts and coloring them with context. No longer will you look at a screw the same way. And Blanding is also generous with showcasing real-world examples of these principles from fields like robotics and optics.

This book was first published in 1999, and the concepts have been well-known by optics and instrument designers for over a century. But with 3D printer building now in the mainstream and with precision parts now available on Amazon, this methodology has never been more relevant. It is a founding language for the machine designer. That said, if you’re a seasoned mechanical engineer already aware of the method of exact constraint, perhaps this book isn’t for you, and you can likely get what you need to know from this open-courseware pdf. But if you’ve ever poked through a forum and seen someone reply “hey, your printer is overconstrained,” they’re referring to the method of exact constraint, and this book is just what you need. By thumbing through this book, you too can develop a mindset that enables you to definitively decide when to use a coupling, a linear rail, or a bushing. You too can speak the language of the machine designer.

The spellbooks of hardware that sit on my shelf are few-and-far-between. These are books that promise you no heavy prior knowledge to pick up a foundation of the basics and walk away with something new. While these are rare, Exact Constraint is one of them. It’s a foundation for conversing with other machine designers. I’ve begun applying these principles to my latest 3D printer build, and it has transformed the quality of my prints. With this spellbook I hope that you too can invoke the power of this unsung art and put these ideas into practice in your next machine.