Our friend [Pete] was reminiscing over the golden days with his antique Grundig Majestic console when he realized it deserved proper refurbishing. Now, any generic stereo record player might not be worth the time and effort to fix, but this was not any generic stereo record player. [Pete’s] inherited Grundig Majestic was his childhood favorite due to the distinct sound it had from the tubes that were used as the active elements. So he set out to fix both tube amps inside of the system.

[Pete] has had some experience working with audio equipment in the past. He did what we all aspire to, and got paid for doing what he loves by creating tube amps as a side gig. When he had finally had enough of the sub-par quality of bluetooth speakers that we all put up with for convenience sake, he decided to finally fix his favorite radio that had been lying around for far too long. He got to work immediately in his notebook finding what parts would be necessary for the reboot. The build ended up consisting of a HT supply regulated at 350V, an LT supply half DC-regulated at 6.3V, a 12AX7 input/bass/treble section, 6922 concertina tubes, and an EL34 ultra-linear output section. The end results yielded one amp that sounded just like it did in his youth, and one that isn’t quite there yet. 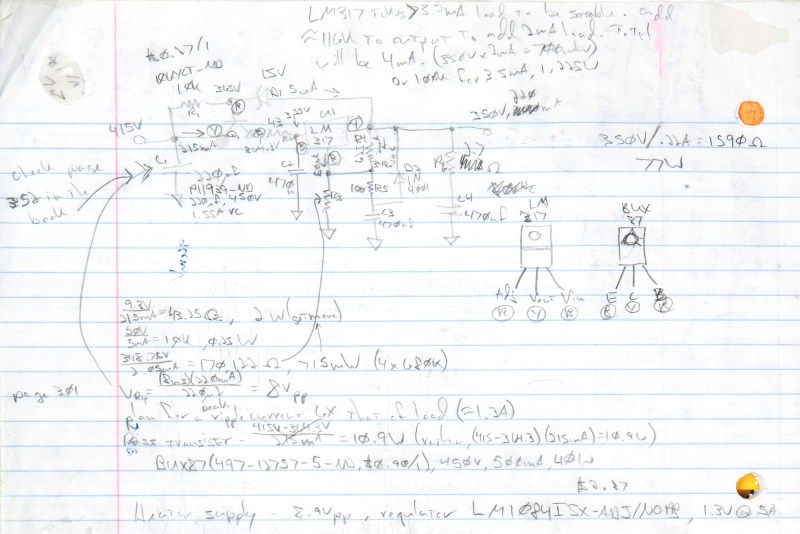 The Grundig Majestic is not done with just yet though. [Pete] plans to add a couple of additional modifications to his beauty when he’s not too busy with the kids. Firstly, perfecting the second amp is a top priority. After that, installing red LEDs that illuminate underneath the tubes would indicate low voltage presence, whereas blue illumination would indicate HT was locked and loaded. Bias monitoring to keep him informed on the status of the circuit conditions would insure smooth sailing down the road. Adding a relay connection of the speakers to the output transformer would minimize a popping sound that is currently being made in the speakers when the HT is initially turned on. These small improvements are just that — small — but that is part of what makes home projects so rewarding. The more you use something at home, the more you realize what needs to be refined further, so you are constantly learning more. It is a gratifying experience that I hope all of our readers have the chance to come across.

Tube amps are no stranger to Hackaday. Some of us have even built a few ourselves.