Here on Hackaday, we’re generally designers of hacks that live in the real world. Nevertheless, I’m convinced that some of the most interesting feats are at the mercy of what’s possible in software, not hardware. Without the right software, no 3D printer could print and no quadcopter could fly. The source code that drives these machines may take months of refinement to flesh out their structure. In a nutshell, these software packages are complicated, and they don’t happen overnight.

So how do they happen; better yet: how could we make that happen? How do we write software that’s flexible enough to coexist peacefully on all sorts of hardware variations?

What separates the big open-source software projects like ROS, LinuxCNC, and Multiwii from the occastional hackathon code are the underlying principles that govern how they’re written. In object-oriented programming, these principles are called design patterns. In the next couple posts, I’m going to crack the lid on a few of these. What’s more, I’ll package them into real-world examples so that we can see these patterns interact with real hardware. The next time you pop open the source code for a big open source hardware project, I hope you can tease out some of these patterns in the code. Better yet, I hope you carry these patterns into your next robot and machine project. Let’s get started.

For readability, all of the examples run in Python3. The snippets below are truncated for brevity, but the real examples in the repository will work if you’ve got a similar hardware setup.

Before jumping in, I need to promise you that these design patterns aren’t mine. In fact, most of them are decades old. If you’re curious, check out the book: Design Patterns, written by a group of authors who’s names are so hard to remember that we shall collectively refer to them as “the Big Four.” For many software engineers, this book stands as the feature-complete reference for object-oriented design patterns, and it’s rock solid. I thought about delivering this post as a book review where I’d drool over all the swanky software patterns that you could put in your next blinky project. The problem? No blinkies! In fact, the entire book builds examples around writing a graphical document editor. For us hardware monkeys, that’s boring and bordering on unacceptable!

With that in mind, I’ll be presenting the words of the wise embellished with the proper treatment of real-world hardware.

Getting the Most from these Examples

Now for the unanswered question: who are these examples for? Hackaday readers come in all flavors. In writing this piece, I’m hoping to bridge two communities: the software folk eager to dabble in hardware and the hardware folk hungry to write better software. For the software folks, these examples are here to showcase what you already know and give them some real hardware context. For the hardware folks, these design patterns are here to muscle-up your toolbox of software techniques with sensors you’ve likely seen before.

To set the base line for getting the most out of what comes next, I’ll assume two things. (1) You’ve had a taste of object-oriented programming by writing a few classes in Python, and (2) you understand the basics of class inheritance. We’ll be building on more advanced types of inheritance in the coming examples.

Getting Cozy with the Hardware

Today I’ll get us warmed up with our design patterns by reading a variety of temperature sensors. The plan? I need a code base that provides me with a way to easily read two different temperature sensor types: a thermocouple and a thermistor. The key ideas behind this are three-fold:

At first, it might seem like we’re just writing a few drivers to read a few temperature sensors. In reality, we have to think at a higher level! Lets ask ourselves: “what’s the core feature that our software provides? How might someone else with a different setup adapt this code to get that same core feature without having to rewrite it?” In our case, we’re providing a common way of performing temperature measurement with a path for expansion to other temperature sensors.

The first setup is a Beaglebone set to read an off-the-shelf I2C-based analog-to-digital converter that’s reading a Thermocouple amplifier.

The second setup is Beaglebone set to read the same I2C-based analog-to-digital converter that’s now reading a voltage-divider setup with a thermistor.

With the real hardware in mind, let’s now discuss our design patterns as we build up a flexible codebase to read both sensors.

We start by teasing out the underlying objects that will comprise our system. First off, we have two separate real-world sensors, both of which mandate a different way of being read as input. Next, we also know that, although these sensors require slightly-different setups, they’re both measuring the same thing: temperature!

With that in mind, let’s write out some requirements. Let’s say that we need to:

Here we’ve mocked up something that does just that. Device-specific behavior is wrapped into classes, and all our temperature-reading methods have the same name. We’re done, right?

While this idea works, it’s a bit naive. In the source code above, we’re under no design contract to give these methods the same name. Heck, we could call one read_temp and another hi_mom, and no one can stop us–not even our mothers! Lucky for us, we can use a design pattern to enforce that these methods be named identically.

With two new ways to throw errors, it’s worth asking: “what’s the benefit of constraining ourselves this way?” It turns out that these constraints are actually a way of making a promise. Here, we’re promising that each child class we write for our temperature sensors will define any abstract methods in the base class.

Above is the Python3 way for defining an abstract base class. Here, the method read_temperature_c is just a placeholder. We don’t need to define what it does here because the details are specific to our sensors. Here we just declare it and decorate it with the @abstractmethod decorator to tell Python that any child class of TemperatureSensor must define the read_temperature_c method.

To finish this example, lets make our Thermistor class inherit our abstract base class:

First, notice that our Thermistor class inherits our TemperatureSensor class. We’re telling our users: “hey, this is a Thermistor class, but you can read it like a TemperatureSensor.” It also tells us, the writers, “hey, I’m promising to define a read_temperature_c method.” Finally, we just write out all the code necessary for reading a thermistor and converting it to Celsius. And that’s it!

Let’s take a step back and think about why this is powerful. Our user could be someone who might not know a thing about how thermistors work, but they can still take measurements with the generic read_temperature_c method. Encapsulating domain-specific information is exactly what we want to do here such that our users don’t need to know every detail about our software stack to get something working. Here, our code is hiding he messy details of converting a resistance to a temperature from a polynomial-fitted line. By hiding those details, we enable them to move on to the next step and write some interesting temperature sensing applications.

In the last section, we blew past one line without discussing it.

At this point, we’ve got a common interface to ask for the temperature, but we could have dozens of different ways to actually collect the raw data. How do we write a single class that properly encapsulates the details of each temperature sensor without getting to heavily committed to the downstream devices necessary for reading them?

To get a better picture of the problem, let’s have another look at a block diagram of our physical hardware:

But that’s not our only possible configuration. Since I’m using a Beaglebone in these examples, I could also use the built-in ADC on the BeagleBone ARM chip itself. That hardware configuration might look like this:

What we need to write is a series of classes for our setup that somehow detach the thermocouple from the extra hardware that’s being used to read it. To do so, we need to decide what components are specifically necessary for reading this thermocouple and what components can be replaced without changing the end-to-end system behavior. In this case, our AD8495 is tightly coupled with the thermocouple. Without it, we just can’t read it at all! On the other hand, that ADS1015 is just a vanilla analog-to-digital converter. Heck, we could replace it with any A-to-D, and we would still get our thermocouple measurements. For this reason, we’ll start off by writing two classes: a class that encapsulates the AD8495 behavior and a class to handle the analog interface. 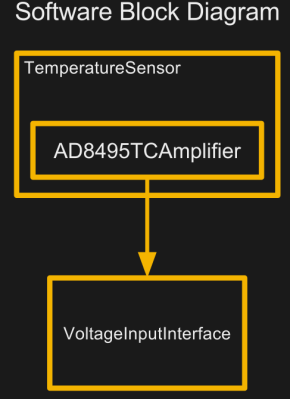 Now’s a great time to map out our software with a block diagram to get a picture of the code we’ll be writing. As a heads-up: these diagrams aren’t certified “UML class diagrams”; rather, for clarity’s sake, I’ve doodled up a simplification. 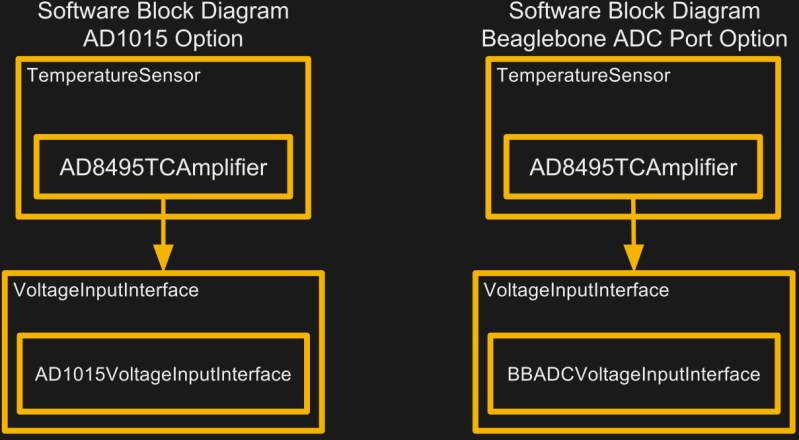 What we’re describing is the bridge design pattern. The bridge, according to the Gang-of-Four, is meant to “decouple an abstraction from its implementation so that the two can vary independently.” Here, our abstraction is a single analog input. Since there are various ways of providing our Beaglebone with an analog input, we need an abstraction such that we can address all sorts of ADC hardware the same way.

This design pattern is rather similar to Polymorphism, which I described first. In fact, just like before, we’ll use Python’s abstract-base class library to implement it. The difference comes in our use-case. Beforehand, we needed a common way to address all types of temperature sensors. Now, we’re trying to separate a temperature sensor from any hardware that’s not specific to the temperature sensor setup.

Just like described before, our AD8495TCAmplifier is just a child class of TemperatureSensor, which means we’ll need to implement a read_temperature_c method. Next off, to instantiate this class, notice that we pass in a reference to a voltage_input_interface. That’s our VoltageInputInterface object described above. Notice how, in the read_temperature_c method, we call it’s read method to get a voltage out. (Don’t get too bogged down the the other parameters: v1_v, t1_c, v2_v, and t2_c. Those are just two datapoints that we can derive from the datasheet and the circuit’s reference voltage that will dictate the gain and offset.)

Notice how the ADS1015VoltageInputInterface does quite a bit of heavy lifting to hide away all the details of the actual ADS1015 driver just to expose it with a single read method. That’s exactly what we want–to trade all the unnecessary device-specific details of our voltage input for a simple interface.

Now we just write a Python script to “wire them all up,” connecting our object dependencies.

And that’s it! That about covers it for the first week. This time we covered polymorphism, which provides different classes with a common interface, and bridges, which detaches our classes from some implementation-specific components. Both of these patterns make our code more generalizable and flexible across different types of hardware. If you’re looking for more context, or you want to run these examples, have a go at the source code. Until then, tune in next time where we’ll talk singletons and stubs!