The Lunar Escape System would only be used in the event of a failure of the ascent stage engine. For hopefully all missions, this rocket-powered life raft would be dead weight, and that meant shaving every unneeded ounce. There would be no computer, and some plans called for no attitude indicator. Fuel would be siphoned off from the Lunar Module, and the dry weight of the entire vehicle would weigh about 370 pounds in Earth’s gravity, or about a hundred pounds less than the lunar rover flown on Apollo 15, 16, and 17.

Like the lunar rover, the LESS would be stored on the outside of the descent stage, flat-packed, and assembled on-site. Once the LESS is deployed and fueled, the astronauts would return to the Lunar Module, repressurize the spacecraft, recharge their suits, and wait for the first launch opportunity.

Why go back to the lander? The PLSS life support system found in Apollo space suits could only support an astronaut for about four hours, but assembling, fueling, and servicing the LESS would take nearly three. Without a quick reprieve to fill up their suits, the astronauts would only have an hour to wait for the right time to launch, ride it to orbit, rendezvous, dock, and enter the command module, and finally, repressurize the spacecraft. It simply can’t be done. In fact, simply launching to orbit and reentering the command module is just barely possible in four hours.

Orbiting By The Seat Of Your Pants

While the crew of the LESS would be able to communicate with Houston and the Command Module, the LESS would not be equipped with a computer. There would be no guidance system, save for a sextant. The commander of this rescue mission would have to fly into lunar orbit by the seat of their pants.

Through the 1960s, there was significant concern someone would eventually have to launch into orbit and rendezvous with a spacecraft without the assistance of even the primitive computer control available at the time. During Apollo 9 and Apollo 10, crews experimented with flashing beacons and visual sighting of returning lunar landers, and  Buzz Aldrin’s doctoral thesis — arguably the reason he was chosen as the Lunar Module pilot for the first landing — was titled, “Line-Of-Sight Guidance Techniques for Manned Orbital Rendezvous”.

These techniques for orbiting and rendezvous with another spacecraft could not apply to the LESS. The crew would only have four hours between climbing out of a crippled Lunar Module on the Moon’s surface and climbing into an orbiting Command Module. Aldrin’s techniques of slowly closing in on an awaiting spacecraft over several orbits worked when you had a real, proper spacecraft, the ascent profile of the LESS was slightly more direct.

After assembling the LESS, climbing back into the Lunar Module, and refilling their space suits, the stranded astronauts would wait for the next launch opportunity, and possibly for the Command Module to reorient itself into a more favorable orbit.

Near the appointed time, the astronauts would climb out of the Lunar Module for the last time and strap into the LESS. The Command Module would pass overhead, and several seconds later the commander would light the engines. The LESS would take off, but only with an acceleration of about two times lunar gravity. For the first ten thousand feet, the commander would keep his eye on the attitude indicator, while the pilot would look for landmarks, ensuring that yes, they are indeed going the right way. At around ten thousand feet above the moon’s surface — a guesstimate, because there is no altimeter on this lifeboat — the LESS would begin pitching over, eventually inserting it into an orbit with an apoapsis sixty nautical miles above the moon’s surface. 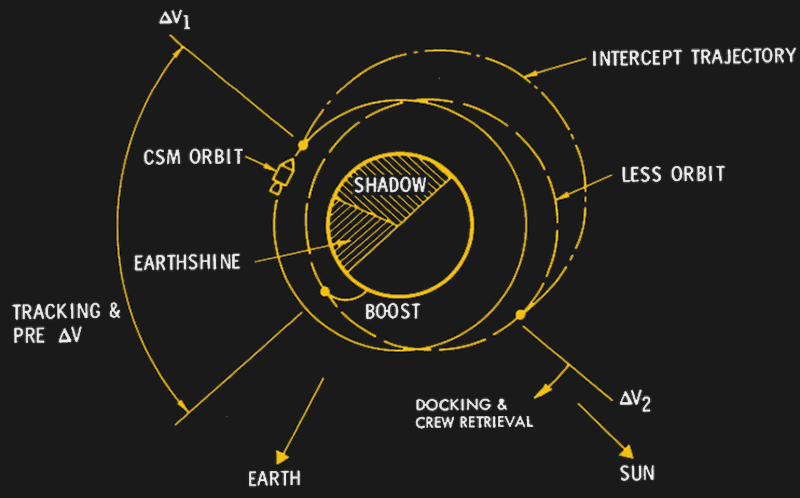 The Command Module pilot would track the LESS on ascent. Once the LESS made a stable orbit after firing its engines for eight minutes or so, the CM pilot would enter the relevant angles and times from visual and radar tracking into the Apollo Guidance Computer. The computer would, in turn, tell the pilot how long to fire his engines to enter a higher, intercept orbit. After nearly an entire orbit around the moon and two hours, the Command Module would again fire its engines to put it in the same orbit as the LESS. From here, it was a simple matter of rendezvous from a few nautical miles away. Studies demonstrated the Command Module pilot could spot the LESS from ten or fifteen miles away, with radar guidance available beyond those ranges.

At this point, the studies for the LESS break down somewhat. At the time the LESS studies were completed, orbital rendezvous was well understood, but the question of how the astronauts would get back inside remained. Plans for inflatable probes were floated, and there was the possibility of a small, simplified docking adapter that would latch onto the front of the Command Module. Because of the bulk of the life-support backpacks, the astronauts would have to enter through the main hatch instead of the front service tunnel of the Command Module, and there had to be considerations for an incapacitated astronaut. Really, though, after flying a rocket chair into lunar orbit, dealing with tethers and hand holds isn’t that big of a deal.

The Legacy of the LESS

Shortly after the study for the LESS was complete, Congress canceled Apollo 18, 19, and 20. The Apollo Applications Program would result in Skylab, but plans for extended stays on the Moon and flybys of Venus were thrown out. Without plans for an LM truck supporting extended Lunar missions, there was no space on later Apollo missions for a nearly four-hundred pound lifeboat. In any event, the LESS would take nearly three years to develop, and the last footsteps on the moon would be just twenty-six months after the LESS study was published. 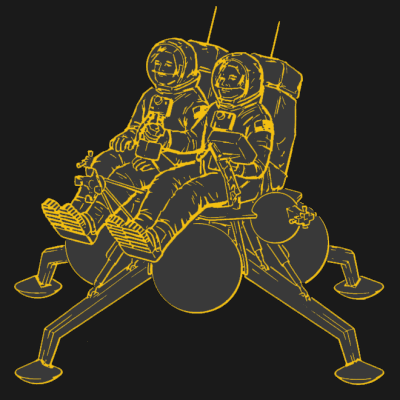 Nevertheless, the engineers behind the LESS were thinking ahead. The LESS could reach Lunar orbit, but that also means it could lift off from its initial touchdown point, land thirty miles away, and return to the Lunar Module. This was the inspiration for the Long-Range Flyer (LRF). This was simply a slightly more robust LESS, equipped with landing gear, that would also be able to perform the LESS rescue mission.

The LRF would have been used for scouting, research, and extending the range of how far astronauts could travel during their stay on the Lunar surface. Of course, this vehicle was never flown, but in the coming decades, when mankind returns to the moon, we’ll want a fast, easy way to get around quickly on the Lunar surface. Here, we’ll probably be looking over fifty-year-old studies from aerospace companies that don’t exist anymore, and creating a small, rocket-powered chair. There are a lot of benefits, and if the main lander breaks, it can be used to fly up to a waiting Command Module.

56 thoughts on “Space Escape: Flying A Chair To Lunar Orbit”