Your eyes pop open in the middle of the night, darting around the darkened bedroom as you wonder why you woke up. Had you heard something? Or was that a dream? The matter is settled with loud pounding on the front door. Heart racing as you see blue and red lights playing through the window, you open the door to see a grim-faced police officer standing there. “There’s been a hazardous materials accident on the highway,” he intones. “We need to completely evacuate this neighborhood. Gather what you need and be ready to leave in 15 minutes.”

Most people will live their entire lives without a scenario like this playing out, but such things happen all the time. Whether the disaster du jour is man-made or natural, the potential to need to leave in a big hurry is very real, and it pays to equip yourself to survive such an ordeal. The primary tool for this is the so-called “bugout bag,” a small backpack for each family member that contains the essentials — clothing, food, medications — to survive for 72 hours away from home.

A bugout bag can turn a forced evacuation from a personal emergency into a minor inconvenience, as those at greatest risk well know — looking at you, Tornado Alley. But in our connected world, perhaps it pays to consider updating the bugout bag to include the essentials of our online lives, those cyber-needs that we’d be hard-pressed to live without for very long. What would a digital bugout bag look like?

It pays to think about the specs before designing any system, of course, so for the purposes of this article, let’s define our bugout scenario as a natural disaster of local to regional scope — think hurricane, flood, tornado, ice storm, etc. We’ll assume this will require you to leave your home for three days or so, and that you’ll have to travel to another location — a shelter set up by local emergency management authorities, perhaps, or even to the home of a friend or relative outside the impacted area. Let’s also assume that we can expect at least some disruption of infrastructure as a result of the disaster — lines may be down, power may be out, and cell phone service may be spotty.

Let’s further stipulate that our digital bugout bag will be part of our regular bugout bag, as opposed to a separate backpack or bag. Whatever we want to take with us will have to fit in the space between our sweatpants, undies, and MREs.

The center of most people’s online life today is the smartphone, so that’ll be the first thing in the bag. In fact, if you’ve had any heads up on the disaster brewing around you, you’ve probably been on the phone pretty much constantly, checking out the situation. That’s good — situational awareness is critical to making good decisions in any crisis, and your smartphone is the perfect tool for that. But it’s not much good without juice, and if you’ve been texting and browsing in the lead up to the evacuation, is the phone even fully charged? How bad would it be to get to safety only to realize that you’re at 11% and have no way to top off?

I’d say the next thing in the bag needs to be a charger for your phone. As cheap and ubiquitous as these are, and as small and light as they’ve gotten, it pays to have a couple around (including the appropriate cable). Stash a charger or two in the car as well your emergency bag. But our scenario might include a power outage, so a wall-wart charger might not cut it. So I recommend a USB battery pack plugged into an outlet next to your bag. It’ll always be topped off and a three-second process to throw it (and its charger) into the bag. Fair warning, though: as my son just discovered on a six-day backcountry hiking trip, even a fully charged battery pack might not charge a depleted phone completely. So you might want a big one, or perhaps two.

You also might want to think about where you’re likely to shelter. If you’re crashing on a friend’s couch, chances are good you’ll be handy to an outlet. But if you’re on a cot in the middle of a high school gymnasium, your nearest outlet is going to be far away. I’d say it’s unreasonable to put an extension cord in the bag to handle this, and chances are good that shelter administrators would frown on this anyway. So you might want to prepare for the need to share an outlet. Throw a multi-tap adapter or power strip in the bag, and it’ll be easy to persuade the outlet’s current occupant to share. Remember that this phone is your digital lifeline, so stick around while it’s charging.

What Was That Number? 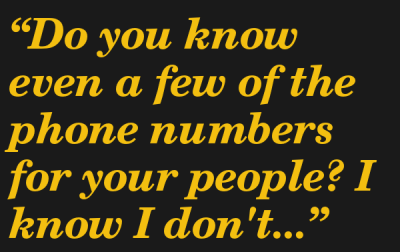 With a smartphone and a means to charge it, you’ve got instant access to all the information and entertainment in the world. But without service, which we counted as a possibility in our bugout scenario, what good is the thing? Cell sites might be swamped, or their backup generators could run out of fuel. Or maybe the shelter you’re in has no WiFi or their ISP has gone dark. What do you do then? Do you know even a few of the phone numbers for your people? I know I don’t. I couldn’t tell you my wife’s phone number if my life depended on it!

We’ve become so accustomed to just punching up our contact list or asking Siri that we don’t remember phone numbers anymore. So if your contacts are not actually in your phone’s memory, keep a printed backup of the most important ones in your kit. It seems odd that a dead-tree version of your contacts should be part of a digital bugout kit, but there you are. While you’re at it, write your doctor’s name and number as well as any medications and dosing information on this hunk of cellulose pulp.

And what about your online content? Most of us can get along for a few days without music and video, but if it’s important to you, think about putting it on an SD card that fits your phone. While you’re at it, maybe it would be prudent to add other important documents that you might not have access to, like copies of passports and birth certificates. Personal documents on an unsecured card represent a security risk though, so encryption might be wise.

Here’s where you get to sound off about what you’d include in a digital bugout bag. What vital pieces of technology would you throw in to make a 72-hour stay bearable? Or would you even bother? Perhaps you’ve been through such a situation and learned some lessons. If so, share your hard-won wisdom and help us all get prepared to survive a few days in a digital dead zone.

119 thoughts on “Ask Hackaday: What’s In Your Digital Bugout Bag?”