As we’ve said many times here on Hackaday, it’s not our place to question why people make the things they make. There’s a legitimate need or utility for many of the projects we cover, no doubt about it. But there’s also a large number of them which are so convoluted that they border on absurd. Not that we love the crazy ones any less, in fact, we usually like those the best. 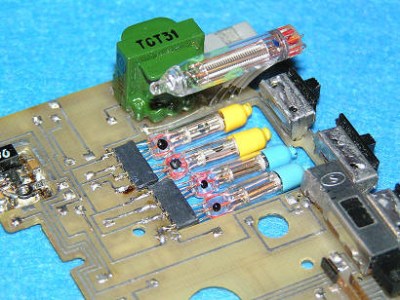 So when we saw this incredible modification to a Panasonic RN-404 microcassette recorder which replaces the audio hardware with a custom built vacuum tube amplifier, we didn’t bother asking what the point was. Perhaps it’s an attempt to make the most impractical method for recording and playing back audio, or maybe it was just to see if it was possible. No matter why it was done, it’s here now and it’s absolutely glorious.

If the look of the hardware didn’t tip you off that this project makes use of old Soviet-era components, the video after the break certainly will. Specifically, it’s using 1ZH25R and 1S38A tubes which were originally intended for military use. Just like all cool old Soviet tech was. Say what you will about the Cold War, it certainly got the engineering juices flowing.

There’s quite a bit of information about how these ancient tubes were brought back to life by way of this gorgeous home-etched PCB. Suffice to say, working with tubes is an art to begin with, but working with such small and unique ones is on a whole new level.

This isn’t the first time we’ve seen some tiny tubes make their way into a piece of consumer audio equipment, but this one certainly takes the top spot in terms of professional final results.