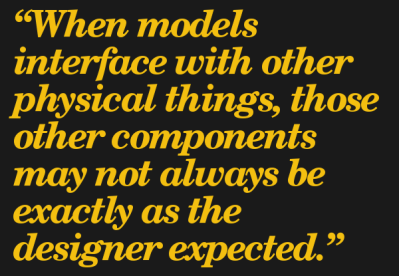 Interfaces With Other Hardware are Trouble Spots

The most common reason an STL file may be not quite right is a mechanical connection where some piece isn’t quite as the designer expected, so the 3D model that interfaces with it no longer fits.

I ran into this issue recently when building my own version of a project called TWANG! which is a delightful one-dimensional dungeon crawler played on an LED strip, with a 3D printed enclosure and component housing. The joystick is a spring doorstop with the wide base secured by a retainer ring, and topped with a knob that contains an MPU-6050 accelerometer and gyro. I built mine by using this remix by [Bart Dring] but found that my hardware didn’t quite match the designer’s versions.

The ways in which the STLs were Not Quite Right are fairly typical examples. In order of increasing severity, they were:

If an STL is not right because of a physical interface problem, there is usually only one thing really wrong with it. Either something is not quite in the right place, or is too large or too small, and the model can’t be used as-is.  It is not possible to perform the usual CAD functions on an STL file to fix such issues, but there are still some things that are easy to do with STLs, even for novices:

These options can provide a workaround when the problem can’t be simply ignored or fixed with a bit of tool work.

Example: Resizing Only a Piece of a Model

To deal with my spring and threaded hole mismatch, I first cut the model apart to isolate the threaded section. Then I resized the threaded section in x and y only, leaving z (height) unchanged. The thread pitch of the spring was good, it’s just the diameter of my spring was physically smaller than the one the designer expected. After the threaded portion was scaled correctly, I merged all the pieces back together.

I cut out a central cylinder containing the threaded portion with Autodesk’s 123D Design (now discontinued) but it would have also been possible to cut a square section out via a few straight cuts, using the same tools that are used to cut models into pieces to fit smaller print beds.

To determine the amount by which I needed to scale the threaded portion, I measured the (too-large) STL and found it to be 10.4 mm between the narrowest parts of the threads on the model. Then I measured my actual spring, and found that I’d need to bring that size down to 8.2 mm. 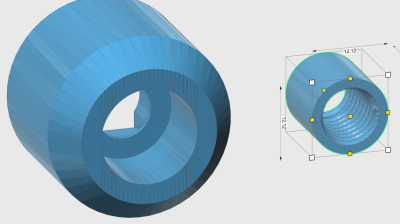 The cut-out section was 15.3 mm per side, and scaling it by a factor of 0.79 brought it down to 12.1 mm. The resulting threaded area diameter went from the original 10.4 mm to 8.2 mm, which would fit my spring. At this point, it would be possible to 3D print only the small section that was resized in order to physically test the fit.

Only one issue remained after resizing the threaded section: the cut-out part was now smaller, leaving a gap when it was re-inserted into the original model. One way to solve this is to model a small hollow cylinder slightly larger than needed to fill the gap, and merge all three models together. The other option is simply to lay the new, smaller threaded insert into the original model like an adapter, and merge the models together. Either way, the overlaps are obliterated and the new model has only the smaller threaded section.

Different tools are good at different things, and while most programs have some interfaces that take getting used to, here are some useful and accessible options for manipulating STL files:

Sharing models via STL isn’t going away any time soon, but it helps to be mindful of the ways in which things may end up being not be quite right for someone down the road.

Just as people now regularly design models as separate parts that will 3D print more easily, so too is it helpful to make design decisions that try to allow for changes that are out of one’s control as a designer. Would a model still be useful if mounting hole locations changed? Could a user make fixes or adjustments with only a limited toolset? Is it possible to make the interfacing parts modular for easier adjustment?

Having to go back to adjust an STL file can be an unexpected delay in a project, but it can sure beat needing to do a lot of manual rework as an alternative. Re-creating a 3D model of a part from scratch is always a possibility for those comfortable with modeling, but do you have your own tips or methods for addressing common misfits with STL files? What’s your favorite way to make it fit? Let us know in the comments!

49 thoughts on “3D Printering: When An STL File Is Not Quite Right”