The demos of OpticSpy pulling data out of a seemingly solid red LED were a blast to see. I’m glad that Joe also spend time walking through the circuit:

He mentioned that he doesn’t always get to stretch his analog design chops and this was a good project for it. Likewise, I enjoy working my way through the schematic, which uses a double-stage amplifier to condition the signal from the optical sensor. The final stage is a comparator which spits out the digital signal. Not shown in the screenshot above is the FTDI chip that takes this signal and spits it out to your serial terminal. 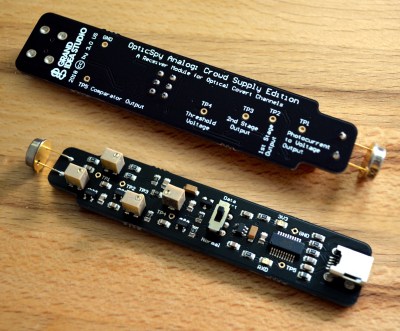 Joe admits that it’s hard these days to find LEDs leaking data, so he got to make his own artificial sources. His demos included using the Parallax open conference badge, a laser diode driven by an Arduino, and Tomu, a microcontroller breakout board that hides in your USB port. The four trimpots allow for adjustment of the stages, something Joe had to do for the talk as the front of the room was getting blasted by the afternoon sun.

Following Joe’s presentation, Kitty Yeung took the stage. A PhD in Applied Physics, Kitty’s talent spans many areas and she is likely to introduce herself to you as a creative technologist. You may have bumped into her at this year’s Bay Area Maker Faire wearing a shoulder-mounted solar panel, but her wearable creations are well known beyond the maker community having had multiple designs shown during 2016 San Francisco Fashion Week. 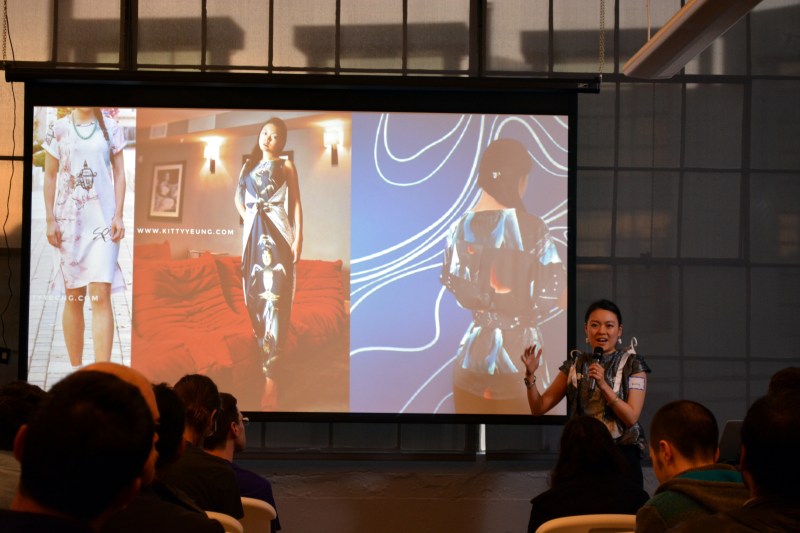 During her talk Kitty showed off an amazing dress which used LEDs in the garment to light up different constellations. These were controlled by gestures that can be retrained based on the wearer’s preference. The effect is delightful, especially because it is designed to complement her own paintings woven into the garment material.

Unfortunately the labor that goes into creating such a piece means that the idea is difficult to scale. In the image above, Kitty is showing off three of her designs that she has already taken to market. They include her paintings, but not the technology she likes to add to her works. I find her open challenge quite interesting. Right now, anyone can order custom print fabrics. You can even place orders for garments that have mix-and-match components, like different cuts for the sleeves. Kitty wonders what will it take to bring eTextile technology to low-run manufacturing and looks to the engineering community to bring this to reality.

Unfortunately I don’t live in San Francisco, so it’s a rare treat to attend the Hardware Developer’s Didactic Galactic — a monthly meetup focused on developing electronic hardware that takes place each month at Supplyframe’s San Francisco office. There are always featured speakers like Kitty and Joe, but the audience that shows up is a great group of engineers working in all different parts of industry. If you’re in the area, this is a can’t-miss event.

19 thoughts on “Joe Grand Is Hiding Data In Plain Sight: LEDs That Look Solid But Send A Message”