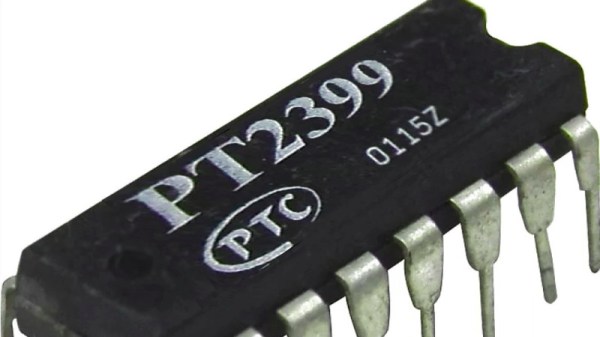 If you are fortunate enough to have had the opportunity to play with an analogue-reel-to-reel tape recorder in a well-equipped studio, you probably looped the tape around to create an echo, or a delay in the audio. It was a desirable effect to have, but not a practical one for a guitar pedal or similar portable accessory. Silicon alternatives for creating delays have been in production since the 1960s, first the so-called bucket brigade delay lines that used a switched chain of on-chip capacitors, and more recently all-digital chips that process the delay by storing samples in RAM. One of the more popular of those is the Princeton Technology PT2399, but it comes with something of a snag for the experimenter in the form of a sparse data sheet. Thankfully the folks at [Electrosmash] have come to the rescue on that front with a thorough technical examination of the chip that should fill in any gaps in the official documentation.

After a brief examination of the range of chips of which the 2399 is a part, they dive right into the chip’s internals by rearranging the internal circuit diagram from the data sheet to the point at which it makes more sense. At which point the difference between the chip’s delay and echo functions becomes obvious, through the inclusion of a feedback path.

We then are taken through the pins, examining what lies behind the power supply and analog inputs and outputs. We are somewhere between a data sheet and an app note here, as some of this is information rarely present even in really good data sheets. Finally, we are taken through the chip’s performance, with real-world distortion and noise measurements. Armed with this page, the would-be PT2399 designer really can say they know what they are working with.

Surprisingly few PT2399s have appeared on these pages, however one did pop up in the Synthbike.