A Hike of Good Fortune

If you’re going to be inspired by natural mechanisms, it pays to be out in nature. During a hike in the Alps with his dog in 1941, George de Mestral, a Swiss electrical engineer, found his inspiration. He and the animal had picked up a multitude of burrs during their walk, and as George picked them out of the fur and off his clothes, he wondered how they managed to attach themselves so tenaciously.

For anyone unfamiliar with these unwelcome travelers, burrs are the spiky ripe fruit of any of a number of plants, most commonly the Burdock. The burrs are a dispersal strategy used by the plant to send its seeds far and wide by hitching a ride on the coat of a passing animal.

George put a burr under a microscope and was fascinated by what he saw. Each spike on the burr ended in a sharp point that looped back into a hook shape. Mixed in with the spikes were strands of the dog’s hair, knotted and tangled around the multitude of hooks. What’s more, the wool of his trousers and socks, standing out from the surface of his clothing as tiny loops, were the perfect medium to catch the burr’s hook.

In that moment, George found inspiration for a new kind of fastener, and he would labor for the better part of a decade perfecting his invention. Early prototypes using natural fibers worked, but not for long as the shape of the mechanism quickly wore out. George found that the new miracle fiber Nylon was perfect for hooks and the loops that would stand up to repeated use, and was soon able to create small amounts of working fasteners. But perfecting a mechanized process for creating the stuff proved difficult. He finally hit upon weaving stiff Nylon threads into loops while heating the thread, causing it to stick out from the backer. A clip with shears then formed the hooks, and loops came from thinner threads similarly woven but left unsnipped. 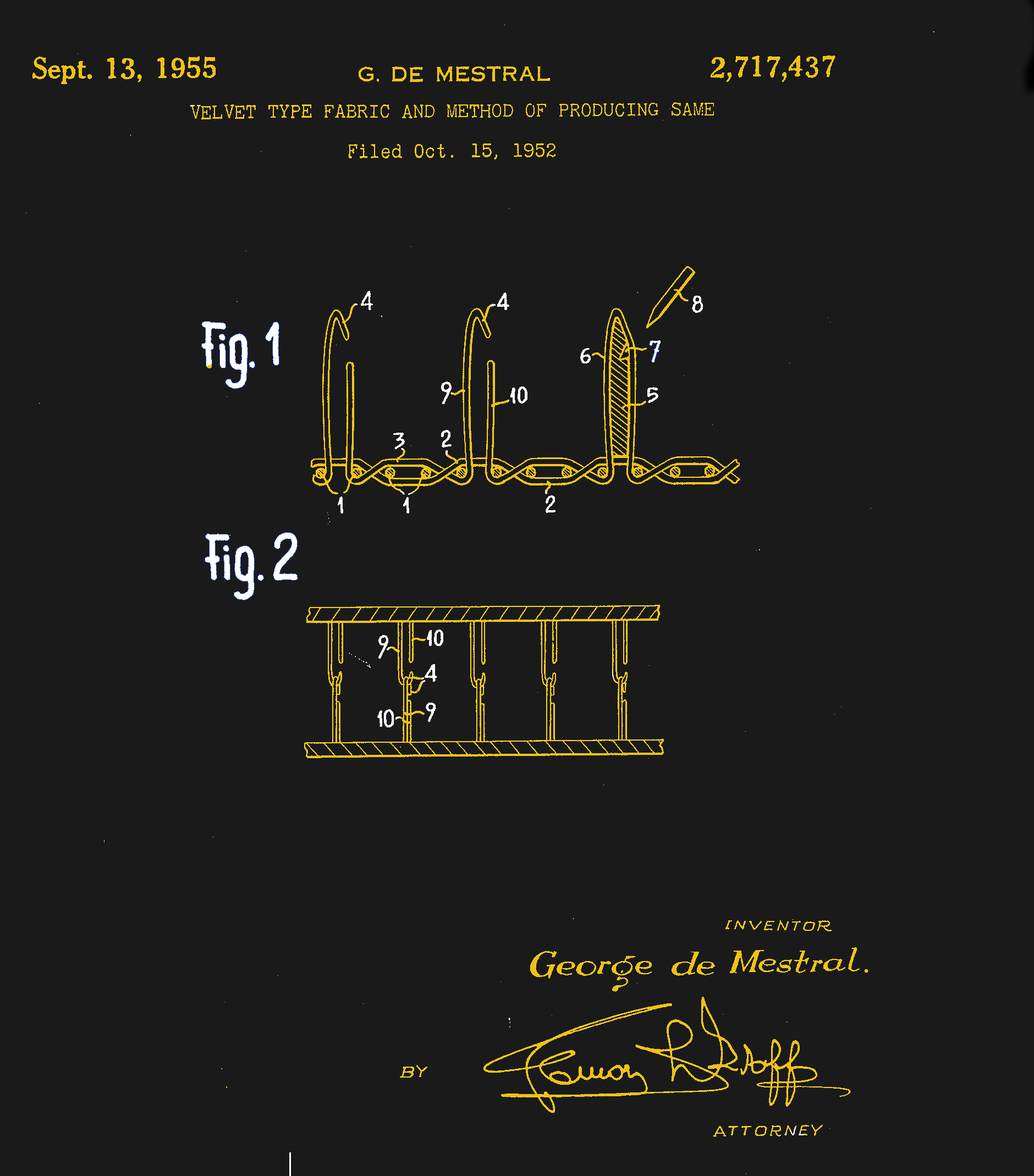 US patent 2,717,437. George patented his idea and trademarked the name “Velcro” (from velour and crochet, or hook) for the product and his company, which is still in business today.

Interest in the new fastener was anemic at first, but got a boost when the budding American space program incorporated de Mestral’s product into spacesuits and used it for sticking things down inside spacecraft. Once de Mestral’s patents finally ran out in 1978, hundreds of companies swooped in with generic versions of the product, categorized under the bland “hook and loop fastener” banner. But like so many successful inventions, the brand name has become the name everyone uses, and hook and loop fasteners have become ubiquitous, with applications ranging far beyond the textile industry that was originally targeted.

The primary advantage of hook and loop fasteners is that it doesn’t require alignment to work. Unlike a zipper (one of our most favorite mechanisms), which requires engagement of the two sets of teeth, if you get the hook piece anywhere near the loop piece, chances are pretty good they’ll stick. This actually works out to be a problem, too, in that garments can end up misaligned — stage costumers tend to shy away from hook and loop fasteners even for quick-change costumes for that very reason. It’s also pretty common to have the hook side snag fabrics with any kind of nap, not just the intended loop material. And who hasn’t seen a hook side matted with lint and fibers that reduces its holding power?

But in general, the strength of this mechanism is pretty impressive. The bond between the hook and the loop part is strong both perpendicular to the mating plane and in shear, thanks to the thousands of entanglements that have to be overcome to break the bond. But if the two halves are peeled apart, the breaking strength is lowered dramatically by breaking only a few connections at a time.

In terms of materials, the hook and loop fastener concept has gone far beyond the original natural materials de Mestral worked with. Nylon and polyester rule the consumer market, but NASA has developed high-strength fasteners for harsh conditions with more exotic materials such a Teflon and glass fibers. And a German firm has developed a terrifying steel version of the fastener that can carry up to 100 N/cm². One square foot of that stuff could support 10 tons.

Hook and loop fasteners have come a long way in the past 70 years, going from textile oddity to an indispensable fastener in almost every industry. That it started with a burr on a dog is a testament to what can happen when we pay attention to what nature has to offer.