The oscilloscope is an essential tool of any electronics bench, and it is also an instrument whose capabilities have expanded exponentially over the decades. Your entirely analogue CRT ‘scope of a few decades ago has now been supplanted by a digital device that takes on many of the functions of both an expensive multimeter a frequency counter, and more. At the top end of the market the sky is the limit when it comes to budget, and the lower end stretches down to low-bandwidth devices based upon commodity microcontrollers for near-pocket-money prices.

These super-cheap ‘scopes are usually sold as kits, and despite their very low bandwidth are surprisingly capable instruments with a useful feature set due to well-written software. I  reviewed a typical model last year, and came away lamenting its lack of an internal battery and a decent quality probe. If only someone would produce an inexpensive miniature ‘scope with a decent bandwidth, decent probe, and an internal battery!

As it happens, I didn’t have long to wait for my wish to be satisfied, with news of the release of the DSO Nano 3. Let’s see what you can do with a portable scope for less than $50. 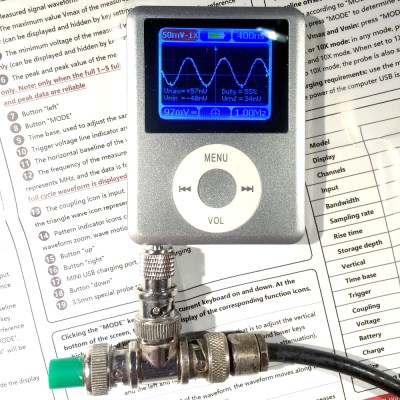 Running across the DSO Nano 3 immediately raised an eyebrow. Here was a little pocket ‘scope from China with an internal battery, a proper probe, and most importantly, a claimed 20MHz bandwidth. Best of all, it could be had for a relatively paltry £36 ($47)! If it lived up to that bandwidth claim, it could be a real game changer, so I ordered one to give it a test. A few weeks’ wait for international parcel post, and I had the package on my bench.

Surprisingly given that the trend has been for Chinese electronic products to arrive in ever-higher-quality boxes, this product arrived without packaging save for a plastic click-seal bag. Inside was an instruction sheet, a mini-USB lead, a ‘scope probe, a BNC to 3.5mm jack adapter, and the DSO Nano 3 itself. I could have been forgiven for thinking that I’d opened the wrong package, because that last item looked for all the world like a 3rd generation iPod Nano. Hence the name of the ‘scope, then. My best guess is that there is a factory somewhere knocking out fake iPods, and that their cases are available as components which make a handy enclosure for a pocket oscilloscope. I can’t imagine that it will please Apple’s lawyers, but either way it’s an interesting choice as a form factor for something that isn’t a music player, though not one without issues as we’ll come to in due course.

On the front of the unit are the same 2″ screen and wheel control that you will be used to from an iPod, and the similarity extends to the sides and rear of the unit. It’s worth saying that the wheel is a plastic one with a click action rather than the scroll wheel of the Apple original. I don’t remember the Apple music player having a USB Mini socket for charging, but I do recognise the 3.5mm headphone socket. There is a further rectangular opening on one edge that I suspect may have been used for a volume wheel on the knock-off iPod , here it is simply an opening through which you can see the PCB.

Opening up the device, most of its interior behind the display is taken up with a lithium-polymer cell, and space behind the controls is occupied by the electronics. There is a GigaDevice GD32F103 ARM Cortex M3 processor, an Averlogic AL4228 384k video frame buffer, a selection of CPC1008N (PDF) MOS switches, and an AD9283-50 50 Msamples/S analogue-to-digital converter.

The GD32F103 is the brains of the outfit, the AL4228 a piece of fast storage for keeping sampled waveforms, the CPC1008Ns switch between the various ranges, and the AD9283 is the analogue front end. This last part is slightly interesting, because unlike all the others which are of recent manufacture ours had a 1998 date code. How did a 20-year-old chip find its way into a 2018 device? It could be old stock, but I’d hazard a guess that it came from the huge Chinese market in salvaged electronic components that we have all read about.

It’s worth noting that the data lines of the USB port are connected to the GD32F103 despite the manual claiming that the socket has no function other than charging, and a quick look with lsusb revealing no device appearing. If anyone has any tips or tricks as to how this might be probed, let us know in the comments.

Enough about the physical properties, what is it like in operation? Once I’d charged it with the USB lead from a wall wart as advised rather than a computer USB socket, I powered it up with a long press on the centre button. After the splash screen I was rewarded with an oscilloscope display. Connecting the probe to the 3.5mm socket with the supplied adapter, and with a bit of manipulation, I was able to display waveforms from the signal generator.

The interface having to stay within the constraints of the Apple-style click wheel meant that selecting different rages and probes was a frustrating process, but possible once you are used to it. As to its functionality, it lacks some of the advanced functions you might expect of a more accomplished ‘scope or even that which I found on the low-bandwidth model I reviewed, this is very much a basic instrument.

There are two basic functions that an oscilloscope should provide; accurate measurement of voltages, and of time periods. I proceeded to offer the DSO Nano 3 a series of test waveforms, and compare how it displayed them with the same waveforms as rendered by a RIGOL DS1054z. Nano 3 screenshots are all photographic, as mentioned earlier the USB port is purely for charging and does not mount anything from which you can grab an image.

First order of the day was to hook it up to the Rigol’s calibration terminals (the DSO Nano 3 has no calibration terminal of its own). The Rigol supplies a 3V pk-pk 1kHz square wave designed for probe adjustment, and as with any new probe, this one would need a tweak. The adjustment capacitor is on the plug rather than the probe with this model, and unexpectedly needed little attention. With the square wave on the screen then, I could straight away see that the Nano 3 had its frequency as spot-on 1kHz, but the voltage calibration was significantly off at 2.90V to the Rigol’s 3.01V. This would prove to be a consistent issue across all readings, with particularly the RMS values of sine waves varying wildly from those measured on the more expensive instrument.

The party piece of this instrument though is that 20 MHz bandwidth. Firing up my venerable Advance RF signal generator, I set to feeding it signals through the MHz to see how it performed. All the voltages were adjusted to 100mV RMS using the Rigol as a monitor, and the feed came via a 50 ohm terminated co-ax line as shown in the picture near the top of the page.

Disappointingly, when fed a 20MHz sine wave the Nano 3 could barely resolve it. A jagged display was produced, with a very low amplitude and wildly varying frequency measurements. The shot on the left shows a reading of 22.2 MHz, it swung as low as 18 MHz as it tried to make sense of its input at this frequency.

At 10 MHz the picture becomes a little better. The voltage is still way off, but something approaching a sine wave is appearing on the screen and it resolves the frequency correctly. All these readings are taken with the instrument set on a 1X range, as the input is from a 50 ohm terminated line and there is no attenuator present.

As the frequency drops below 10 MHz, the instrument starts to be a much more useful one. Our peak-to-peak voltages come closer to the 100mV set with the Rigol, and the waveforms look as they should. There are still some discrepancies in the voltage calibration, but this has become a much more believable device.

So having spent a while using the Nano 3, what do I think of it? The answer is extremely mixed, on one hand this is an amazing device that could truly redefine what a bargain basement pocket ‘scope delivers, yet on the other it manages to miss the target slightly with both its quirks and its shortcomings. Any such ‘scope that can break away from the few-hundred-kHz bandwidth of the other pocket ‘scopes has to be worth a look, but its over-optimistic bandwidth claim and consistent voltage calibration makes it not such an easy purchase decision, if its rather fiddly interface wasn’t enough.

The iPod case is a nice idea, but it seems as though for an oscilloscope to fit into it there have to be too many compromises made. If the mini-USB port was replaced with a micro-USB one, the 3.5mm socket with a BNC, the click wheel controls with something more useful, and some sort of voltage calibration curve applied, I could forget the 20MHz bandwidth claim and treat this as a rather nifty little 10MHz pocket ‘scope. But as it is I could only recommend this to you if you really must have a way to see a 10 MHz waveform that can fit in a tiny space at all costs. I recommended a novice buy the low-bandwidth ‘scope but I can’t make the same suggestion with this model.

Maybe it’s best to see this device as a first go, a herald of better ones to come. Even with this hardware there are sure to be ways that some of its shortcomings could be addressed in software, so when the inevitable copy-cat instruments and subsequent versions appear, perhaps they’ll be a lot more useful. I hope so, nothing says geek chic more than pulling out what appears to be an iPod and checking a waveform on it!