One of the best things about the Internet — especially the video part — is that you can get exposed to lots of things you might otherwise not be able to see. Take oscilloscopes, for example. If you were lucky, you might have one or two really nice instruments at work and you certainly weren’t going to be allowed to tear them open if they were working well. [The Signal Path], as a case in point, tears down a $30,000 MSO6 8 GHz oscilloscope.

Actually, the base price is not quite $30,000 but by the time you outfit one, you’ll probably break the $30K barrier. Compared to the scopes we usually get to use, these are very different. Sure, the screens are larger and denser, but looking at the circuit boards they look more like some sort of high-end computer than an oscilloscope. Of course, in a way, that’s exactly what it is.

END_OF_DOCUMENT_TOKEN_TO_BE_REPLACED

In the world of oscilloscopes, as in the rest of the test equipment world, there’s always some trickery afoot. Companies will often offer different models to the market at different price points, in an effort to gain the widest possible customer base while also making the most profit. Cheaper, less capable models are often largely identical to more expensive hardware, save for some software or a couple jumpers that disable functionality. [Alexandre] found just this when working to repair his HP 16533A scope card.

Work began when [Alexandre] received his HP 16533A in the mail after a long wait, only to find the trigger functionality was inoperable. This is crucial on a digital scope, so this simply wouldn’t do. After some research online, a post was found discussing which signals to probe to troubleshoot the issue. It noted that corrosion is a common problem on these units, and that occasionally, a certain resistor goes open circuit and causes problems. Initial measurement showed there was still resistance there, but reading closer, [Alexandre] noted this fateful line:

You might not be able to measure it accurately in circuit.

Removing the 100K resistor from the board, the part was indeed open circuit. After replacement with a new component, the trigger circuit was again fully operational. With the scope still open, it was then a simple job to execute a further resistor swap which gives the 16533A the functionality and range of the higher-spec 16534A model.

It’s very common for oscilloscopes and other test hardware to be configured this way from the factory. Rigol scopes are particularly popular with hackers for this very reason.

It’s a bit of fun, but we highly recommend you don’t try and hang an analog scope off your tree at home. These WiFi-controlled ornaments are perhaps more suitable. Video after the break. END_OF_DOCUMENT_TOKEN_TO_BE_REPLACED

The oscilloscope is an essential tool of any electronics bench, and it is also an instrument whose capabilities have expanded exponentially over the decades. Your entirely analogue CRT ‘scope of a few decades ago has now been supplanted by a digital device that takes on many of the functions of both an expensive multimeter a frequency counter, and more. At the top end of the market the sky is the limit when it comes to budget, and the lower end stretches down to low-bandwidth devices based upon commodity microcontrollers for near-pocket-money prices.

These super-cheap ‘scopes are usually sold as kits, and despite their very low bandwidth are surprisingly capable instruments with a useful feature set due to well-written software. I  reviewed a typical model last year, and came away lamenting its lack of an internal battery and a decent quality probe. If only someone would produce an inexpensive miniature ‘scope with a decent bandwidth, decent probe, and an internal battery!

As it happens, I didn’t have long to wait for my wish to be satisfied, with news of the release of the DSO Nano 3. Let’s see what you can do with a portable scope for less than $50.

END_OF_DOCUMENT_TOKEN_TO_BE_REPLACED 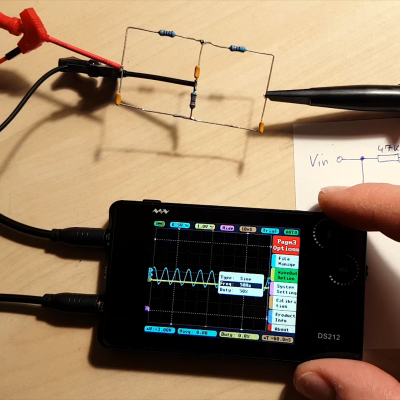 With pervasive smartphones and tablets, the touch interface is assumed for small LCD screens, and we’ve likely all poked and pinched at some screen, only to find it immune to our gestures. Manufacturers have noticed this and begun adding touch interfaces to instruments like digital oscilloscopes, but touch interfaces tend to be an upgrade feature. But thanks to this hybrid oscilloscope touchscreen interface, even the low-end scopes can get in on the action.

It only makes sense that [Matt Heinz] started with one of the most hackable scopes for this build, which was his Master’s thesis project. Using an Android tablet as an auxiliary interface, [Matt] is able to control most of the main functions of the scope remotely. Pinching and expanding gestures are interpreted as horizontal and vertical scaling, while dragging the displayed waveform changes its position and controls triggering. While it’s not a true touchscreen scope, the code is all open source, so can a true aftermarket Rigol touchscreen be far away?

Rigol hacks abound here — you can talk to them in Linux, increase the bandwidth, or just get a look at their guts.