The Obvious: CAN Bus Hacking 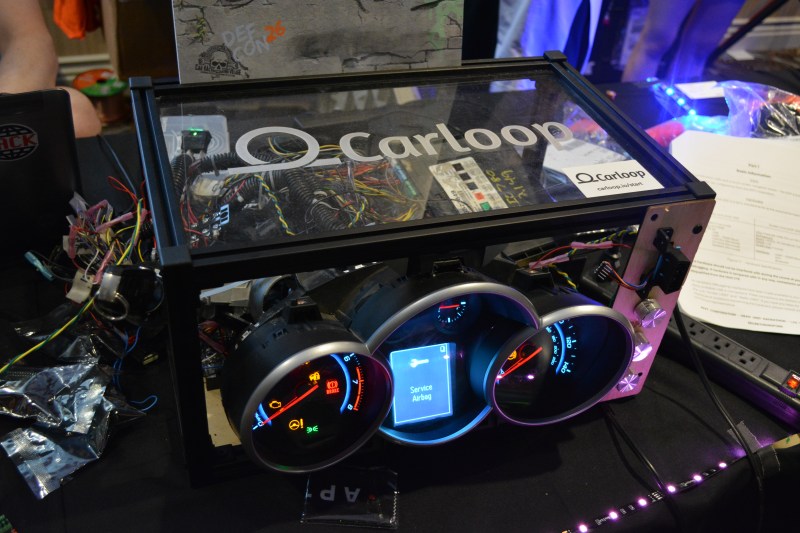 When I think of car hacking, CAN bus is the first thing that pops to mind. CAN is the protocol used for the data network on pretty much every modern vehicle. The standards vary from manufacturer to manufacturer and have been in rolling development ever since computers were tasked with controlling engines, braking, power windows, motorized cup holders, turn signals, and every other electronic part of your vehicle. It’s a house of cards that makes a great adventure for reverse engineering.

The easiest way to play with CAN is to hit the junk yard and buy an instrument cluster, Engine Control Unit, and ignition switch. That’s what’s shown above in a nice extruded frame box, along with a Body Control Unit (the thing that controls windows, locks, AC, and radio). This is a demo for the Carloop dongle that lets you interface with a car’s ODB-II port.

The dongle fits into the palm of your hand. It’s a breakout board for a Particle, and depending on which one you use with Carloop, you can interface via WiFi, Bluetooth, or Cell network. Carloop first hit the scene at Maker Faire back in 2016 with the original 50 units selling in a few hours.

Most of a Ford Focus electronic system

CAN tools closer to the consumer level

Also in use at the Car Hacking village is a 2012 Ford Focus cluster along with a ton of other CAN bus displays and user inputs. This is a demo rig for the CanCat, a board that uses the Arduino Due to interface with a Python scripting interface. You can check out the instructions for that demo above. Both Carloop and CanCat are open source projects, but there were also more consumer-grade products on offer like the neoVI Fire 2 hardware shown above.

Car Hacking CTF is a Bit of Everything 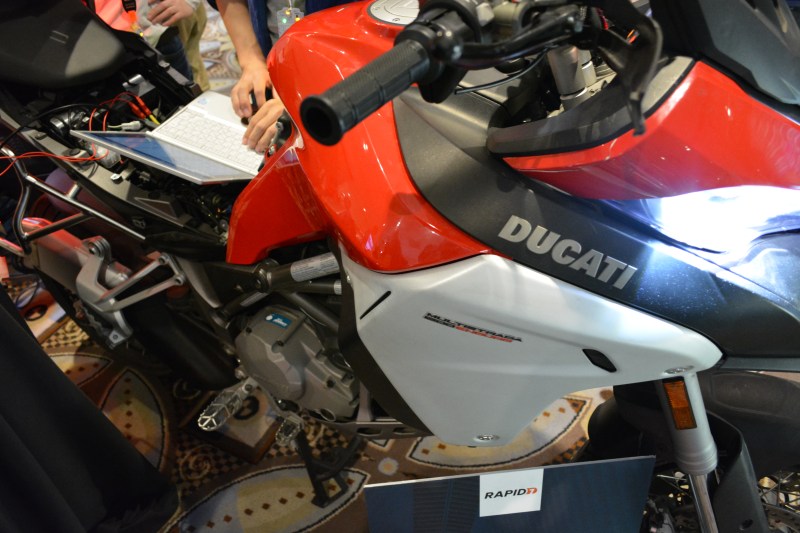 The village features an interactive Capture The Flag challenge that encourages you to do a bit of everything. Play around with the computers on a Ducati motorcycle? Yes please! Hack a four-wheel offroad kart? Of course! The challenge is presented as a webpage of unlocks that you can work your way through as you complete each activity.

An interesting part of the CTF is an escape-room like game, except you need to escape from this SUV. Players choose their difficulty level in advance, and one of the options is a mock abduction. Village staff will blindfold and restrain you at an unknown point during the day and throw you in the back of the vehicle. You’ll work against a countdown clock as you try to escape your bonds and hack into the SUV to put points up on the board.

LIDAR on an autonomous RC vehicle

There’s also some fun with autonomous vehicles. This test track is set up in one corner, challenging people to use TensorFlow to map and navigate the track. We’ve previously seen one of these car designs called the DonkeyCar. There is another model pictured in the closeup above that has LIDAR on top to aid in the mapping! 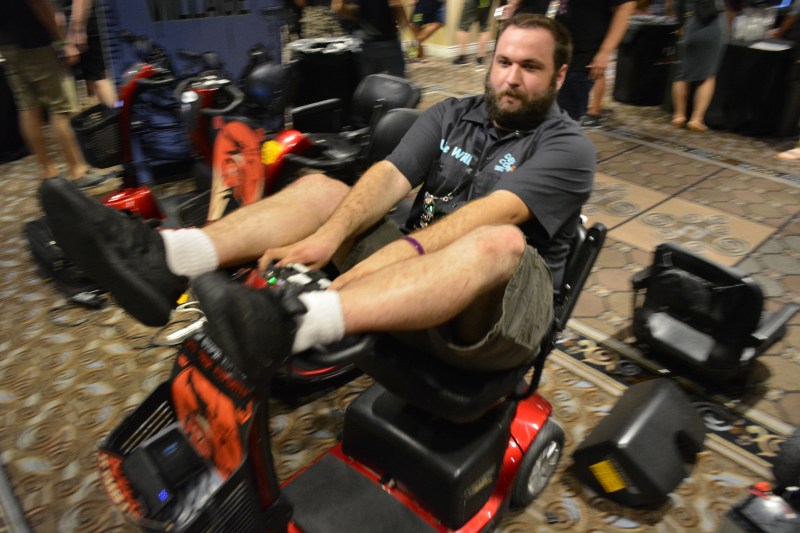 Mobility scooter hacking? Technically these things are cars, maybe? Friend of Hackaday Will Caruana is heading up this new addition which appears to be connected with the @defconbadideas account. When I found Will he was busy trying to remove the control unit on one. They use 24V and apparently are only operating at 50% unless you’re taking it up a hill when more power kicks in. He wants to run it past the 100% mark by powering the motors with 36V.

Teardown of a mobility scooter

At this point, there are four different teams working on the Mobility Scooter Hacking. They have already had a race between Casinos so be on the lookout when you hit the sidewalks of the strip.

There was a nice little power-wheels-like car nipping at the heels of everyone in the room. I didn’t get the scoop on this but if you’re at the con head over to the Flamingo and check it out. This is a perfect chance to get started before deciding to hit up the junkyard to build your own test bench.