We’ve reduced printed circuit board design to practice so much that we hardly give a thought to the details anymore. It’s so easy to bang out a design, send it to a fab house, and have ten boards in your hands in no time at all. All the design complexities are largely hidden from us, abstracted down to a few checkboxes on the vendor’s website.

There’s no doubt that making professional PCB design tools available to the hobbyist has been a net benefit, but there a downside. Not every PCB design can be boiled down to the “one from column A, one from column B” approach. There are plenty of applications where stock materials and manufacturing techniques just won’t cut it. PCBs designed to operate in space is one such application, and while few of us will ever be lucky enough to have a widget blasted to infinity and beyond, learning what’s behind space-rated PCBs is pretty interesting.

The design of PCBs for use in space is primarily driven by the two main phases of spaceflight: getting there, and being there. Some missions will eventually return to Earth gently, of course, and some will set down on the surface of another world, but for the most part, we blast them up and they stay there for the rest of their useful life. 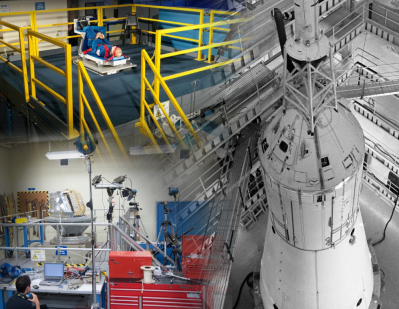 During the short trip to space, the primary challenge to any PCB in the spacecraft is vibration. The PCB will be in close proximity to a barely controlled, continual explosion contained by a machine that’s made to be as light as possible, and even with shock-dampening mounts between the vehicle and the payload, vibration can be significant. NASA’s vibration testing facilities can impart enormous forces to huge loads over a range of 5 Hz to 3 kHz, and blast test samples with acoustic energy up to 167 dB, to simulate what payloads will experience during launch.

That means the PCB has to be built from materials that can withstand a far more dynamic environment than the most stressful situations for earthbound equipment. Somewhat surprisingly, NASA’s own PCB working group guidelines list many common substrate materials, like glass fiber and phenolic resins. It does list a number of more exotic materials, like Kevlar, Teflon, and various resins. For most applications, NASA seems to prefer polyimide substrates, which will be familiar to anyone who has ordered a flexible PCB. The Kapton film upon which these are built is a polyimide, and NASA uses flexible and semi-rigid PCBs built from the stuff regularly. When a design calls for a rigid PCB, polyimide reinforced with glass fiber is sometimes used as well.

Regardless of the materials uses, designers often deal with the physical abuse of launch in the simplest possible way: making the PCB thicker. This only works up to a point, though, since payload weight translates directly into launch costs. When launches go for upwards of $20,000 a kilogram, adding a few grams of weight to a board has to be considered carefully.

Despite their magnitude, the duration of the stresses introduced during launch are short-lived, and if the payload survives the short ride into space, it will face a whole host of challenges over its service life that PCBs on the ground rarely have to consider. Chief among these is outgassing, or the tendency of materials to release gasses when placed in the vacuum of space. The resins used in PCB substrate that are perfectly stable under atmospheric conditions may quickly bubble out of the board once in space, which can lead to contamination of other surfaces and weakening of the substrate. Where outgassing needs to be controlled, substrates of PTFE resins with glass fiber reinforcement manufactured under stringent conditions are often used. 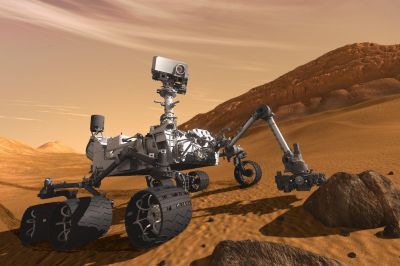 Few earthbound devices will experience the thermal regimes that something in orbit will, and those thermal loads are a major design consideration for space-rated PCBs. Without an atmosphere to moderate temperature swings, one side of an orbiting satellite can be scorching hot in the sun, while the other side plunges to frigid temperatures. The physical stress introduced by thermal expansion has to be dealt with; again, this mainly boils down to choosing the right substrate material, and closely matching its coefficient of expansion to that of the metal used for plating. This minimizes the physical stress on the traces and on through-holes.

It’s also important to consider how temperature affects the electrical properties of PCBs. The dielectric constant of the board material changes with temperature, and the designer needs to take that into account, particularly in RF circuits where intrinsic impedance is critical. Dielectric considerations are also important given that PCBs in space often encounter high-voltage electric fields due to solar activity. Boards need to handle those charges without breaking down.

All things considered though, printed circuit boards for space applications are remarkably similar to their terrestrial counterparts. We’ve learned a lot about dealing with the extra challenges of space, and space agencies like NASA as well a numerous commercial interests have developed the tools needed to ensure that one simple mistake doesn’t scrap a multi-billion dollar asset before it can start returning on its investment.