The X-59 QueSST (a rather loose acronym for “Quiet Supersonic Transport”) is something of a return to the classic X-Planes of the past; a pure research vehicle that has no commercial or military application. It exists purely to explore new supersonic technology. But it’s not to study controlling an aircraft flying faster than the speed of sound, we’ve had that knowledge since the 1950’s. Nor is it testing new engine technology, General Electric is already well on their way to producing their own supersonic engines for the commercial sector. The X-59 is designed not to make supersonic flight safer or faster, but to make it quieter.

When an object travels faster than the speed of sound, pressure waves which are formed in the front and rear become compressed together. This compression forms a shock wave, the energy of which is directly proportional to the amount of air being displaced. For a small supersonic object such as a bullet, the shock wave is too small to do any damage and simply sounds like a loud crack. But a large aircraft can produce a shock wave strong enough to break windows and startle people on the ground. 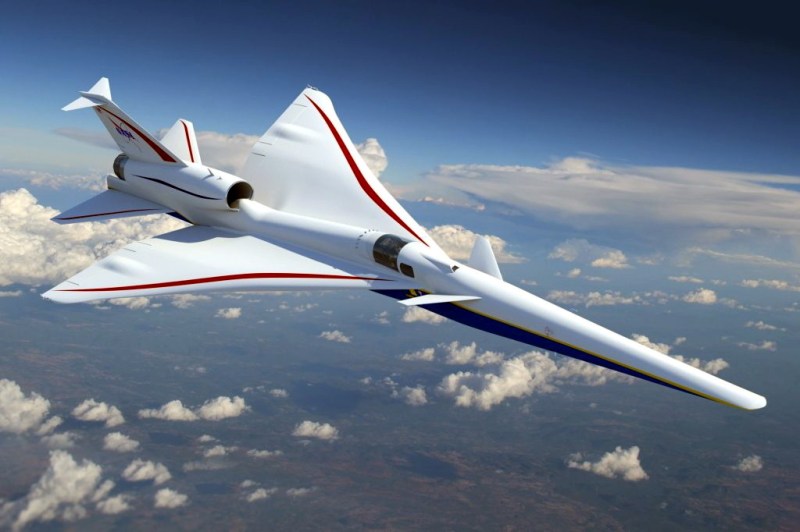 To mitigate this effect the X-59 utilizes a long and narrow fuselage designed to put more space between the front and rear pressure waves, thus preventing their compression. This doesn’t make crossing the sound barrier completely silent, but it does go a long way towards eliminating the traditional “sonic boom”.

On the ground, instead of one loud bang, observers will hear the two separate (but much less energetic) waves as dull thumps. Ultimately, the sound produced by the X-59 at sustained supersonic speeds is expected to be about as loud as a car door closing; quiet enough that most people in urban environments probably won’t even be consciously aware of it.

Beyond its unique shape, the X-59 is not unlike a contemporary jet fighter. In fact, principal components for the new X-Plane such as the cockpit and landing gear came from a Northrop T-38 Talon and General Dynamics F-16, and it will be powered by the same General Electric F414 engine as the McDonnell Douglas F/A-18. But as the X-59 is designed specifically to test the shape of the aircraft and not new engines or control techniques, this isn’t particularly surprising.

Though that doesn’t mean the design lacks special considerations. For example, because of the X-59’s long nose and inline cockpit, the pilot has extremely limited visibility. To overcome this there’s a 4K camera with a 33° by 19° angle of view in the nose, which the pilot will view through a monitor in the cockpit. A similar problem was faced on the Concorde, where its long slender nose made it impossible for the pilots to see the runway during landing. In that case, the solution was to lower the entire nose as far as 12.5 degrees via hydraulic actuators during landing; giving the craft its infamous “droop nose” look. 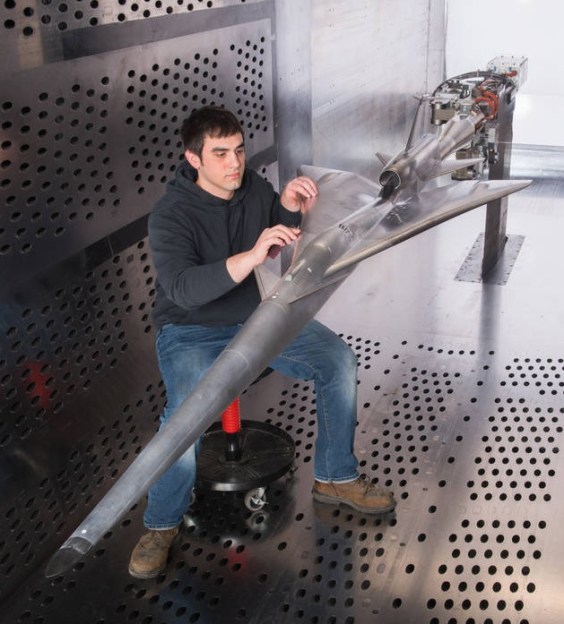 With today’s computer modeling, it might seem strange that the X-59 needs to be built at all. The science of supersonic shock waves is well understood at this point, and neither NASA nor Lockheed Martin really need a physical test object to tell them what they already know. Whether or not the X-59’s unique shape will cut down on the intensity of sonic booms isn’t really a question; the reason they’re building it is to prove it to the average American taxpayer.

Once the X-59 has completed its initial flight testing, it will immediately begin its primary mission: flying over cities in the United States to see how people react. Will they be annoyed by what NASA is calling the X-59’s “sonic thump”? Will they even hear it if they don’t know what time to expect it? These are the sort of questions the agency is looking to answer by building a real-world test article, something no computer model will ever be able to do. The hope is that the testing will prove advanced supersonic aircraft like the X-59 can travel over populated areas without producing the aggravating and possibly damaging shock waves which caused the FAA to ban overland supersonic flight in the first place. In time, this data could be used to get this decades old regulation overturned or amended; opening the door to a new generation of civil supersonic aircraft.

In fact, the first phase of these tests have already started. Earlier this month, NASA started performing simulated “sonic thumps” over Galveston, Texas using an F/A-18. By performing a series of special dives, the aircraft was able to approximate what the X-59 should sound like to observers on the ground. A fleet of microphone stations, as well as hundreds of Galveston citizens, collected sound data which will be used as a baseline when the X-59 flights start.

The X-59 is the latest move in a concerted effort from commercial players and NASA to return supersonic flight to civilian operators. In an era when the world has gotten smaller and the pace of life faster, the speed of our passenger and cargo aircraft simply hasn’t kept up. One could even argue that its slowed down, as during the Concorde’s years of service consumers at least had the option of riding a supersonic liner if their trip matched up with one of the destinations it serviced.

Assuming they could afford it, that is. Critics will claim that no matter what NASA is able to prove with the X-59, the cost of supersonic flight will simply be too high for the average consumer. Or that the amount of fuel consumed by a supersonic aircraft will be off-putting in an increasingly ecologically aware society. Those points may well be valid, but unless the laws which currently shackle commercial supersonic flight are lifted, we’ll simply never get the chance to find out.