A Method to the Madness

Method relies heavily on concepts and technology inherited from parent company Stratasys, and bears little resemblance to previous MakerBots or even contemporary desktop 3D printers. It represents the merging of the desktop and industrial 3D printing markets which many assumed would follow MakerBot’s acquisition, it just took a lot longer to materialize than anyone expected. 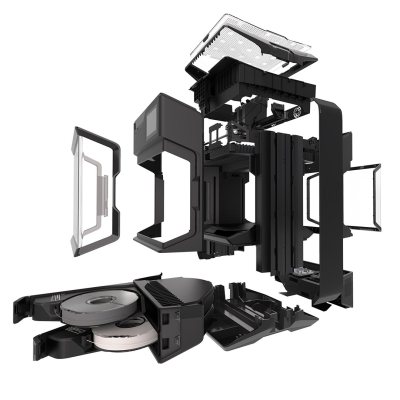 As with previous MakerBot printers, the Method sticks with the dual extruder design that other manufacturers have largely abandoned in favor of a single extruder with material switching capability. Dual extruders are notoriously tricky to calibrate and maintain, but it’s a much faster approach to multi-material printing thanks to the fact that the nozzle doesn’t have to purge itself every time the material changes. As MakerBot is advertising the Method as “The First Performance 3D Printer”, the speed advantage of sticking with dual extruders is clearly worth dealing with some additional engineering challenges for them.

Other interesting features include a heated build chamber which uses convection to maintain a consistent temperature throughout the internal volume. We’re used to seeing heated beds on desktop 3D printers which do an acceptable job of keeping the lower layers warm to prevent warping, but they do no good past a few tens of millimeters. With a heated enclosure however, the entire print is maintained at the same temperature for more consistent results. This is something individuals often attempt to DIY for their own desktop 3D printers, and is a perfect example of MakerBot taking something which is usually seen only in high end industrial machines and bringing it a bit closer to the mainstream.

Method also features internal filament storage bays which MakerBot claims are almost completely sealed from the outside environment. Internal sensors even monitor the humidity in the filament to verify optimal performance. Again, this is a feature we’re no stranger to seeing hacked onto existing 3D printers. Like the convection heated chamber, this is technology which has been unavailable on traditional desktop 3D printers; though we did see at least a prototype of a new machine which was promising to bring this feature to the masses at this year’s East Coast RepRap Festival.

While Method undoubtedly offers some features which to date have been nearly unheard of in desktop 3D printers, MakerBot has also clearly kept a close eye on the competition over the last couple of years. The Method has a number of features which we’ve already seen on consumer-level printers, which some might say call into question the machine’s sky-high price. 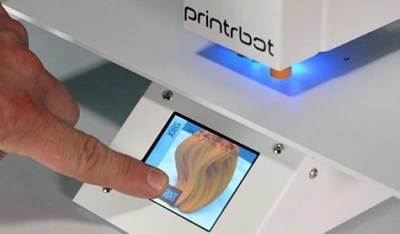 The color touch screen mounted in the top of Method reminds us of PrintrBot’s attempt to make 3D printing more user friendly with a similar interface on their Simple Pro. Unfortunately the community didn’t embrace the paradigm shift which the Simple Pro represented, ultimately leading to PrintrBot closing their doors a few months ago. Be that as it may, it does seem inevitable that 3D printers will get the same touch user interface that everything else seems to have adopted in the 21st century, so we doubt MakerBot will be alone in trying to introduce this on their printers going forward.

Method also features a few enhancements with which owners of the Prusa i3 MK3 will already be well acquainted. A removable magnetic build plate, automatic filament loading, and encoder-based jam detection are all features touted by Method which are also available on Josef Prusa’s latest printer (at about 1/6th the price).

You could even argue that Method’s onboard camera, remote WiFi control, and extensive use of sensors to monitor the current print were inspired by OctoPrint and its vast array of community developed plugins. The OctoPrint community has been pushing the envelope in terms of 3D printer control and monitoring, and has already gotten the attention of a number of other 3D printer manufacturers. Adding MakerBot to the list of companies impressed by what the open source community has managed to do with their 3D printers seems a safe bet.

This time last year there was a glimmer of hope that MakerBot was attempting to make a return to their roots with the announcement of “MakerBot Labs”, and prior to the unveiling of Method some even theorized that the new MakerBot might take the form of a rebranded Chinese printer; allowing them to offer their support and educational curriculum on a vastly cheaper printer. Now that Method is revealed we can see that nothing is farther from the truth. With this new machine, MakerBot is doubling down on the industrial and manufacturing markets in which their Replicator printers still had some sway, and omitting the consumer market entirely.

In doing so, MakerBot has truly come full circle. When they released their first 3D printers in 2009, it was precisely because nobody was selling that kind of hardware outside of the industrial setting. They set the stage for the desktop 3D printing revolution, and for years other manufacturers were rushing to play catch up with MakerBot’s latest by releasing their own cheaper clones. With the unveiling of Method, MakerBot has shown that not only are they the ones desperate to copy the trend-setting features of their competitors this time around, but that their priority is selling this new machine to the very market they sought to rebel against a decade ago. With that in mind, you’d be hard pressed to find a less expensive industrial 3D printer. Makerbot definitely priced outside the consumer level, but if your alternative is a $20,000 industrial printer, this might seem like a great deal.

53 thoughts on “MakerBot Moves Away From Makers With New Printer”