A Little Help From Your Friends

The idea was to build something so that your friend, your mom, or your little sister could be imposed upon to send code to you even though they didn’t know it. From the article:

The greatest handicap to the learning of Morse is undoubtedly the lack of a skilled operator to work the key so that proper receiving practice may be obtained. 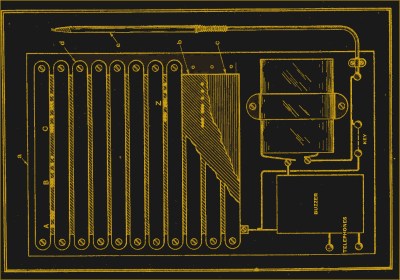 The device contained a buzzer and a battery along with terminals for a key. Across the key though were two connections. One went to a “signal plate” made of brass or tin. This plate sat on a baseboard and above the plate were strips of wood. The other connection goes to a stylus which could be nothing more than a piece of wire wrapped up.

Under the strips of wood is a stencil made of paper or empire cloth which is — apparently — some sort of oil-treated cloth used as an insulator. The stencil has holes in it corresponding to each letter. The person sending you the practice code simply moves the stylus over the right part of the stencil using the wood strips as a guide.

Almost anyone could build something like this. You could probably use scrap wood, wire, and metal. You’d have to buy the battery and maybe the buzzer. But this would have been well within the technical capabilities of even a young person in 1939. With the proper use of screws you probably didn’t even need to solder.

Obviously, there are some limitations to this method. The speed could be spotty if you don’t do a nice steady glide across the stencil. The spacing between characters is probably going to be erratic as your accomplice searches for the next letter.

However, what a clever solution! Sure, today you could devise many other ways to have people send you Morse code or write (or download) a program to send your favorite website or RSS feed. There’s also plenty of code practice resources around. But if you didn’t have that, this would solve your problem.

This reminded us of the Omnigraph which was a common way to learn code way back in 1904 and beyond. These used a clockwork spring and a metal disk (effectively a cam) to operate contacts.

The military had a great interest in training Morse code operators at one time. They had machines that used inked paper tape like the TG-34-A in the video below. There was also the Instructograph (second video).

It is hard to remember when knowing Morse code was a hot job skill and not just a hobby. Then again, if telegraph faxing had caught on, all those operators would have been out of work even sooner. Of course, Morse might still come in handy if you get kidnapped. If you want to learn the sending part, the military film below might not be your best bet, but it is entertaining.