The holidays bring us many things. Family and friends are a given, as is the grand meal in which we invariably overindulge. It’s a chance for decades old songs and movies to somehow manage to bubble back up to the surface, and occasionally a little goodwill even slips in here or there. But perhaps above all, the holidays are a time for every retailer to stock themselves to the rafters with stuff. Do you need it? No. Do they want it? No. But it’s there on display anyway, and you’re almost certainly going to buy it. 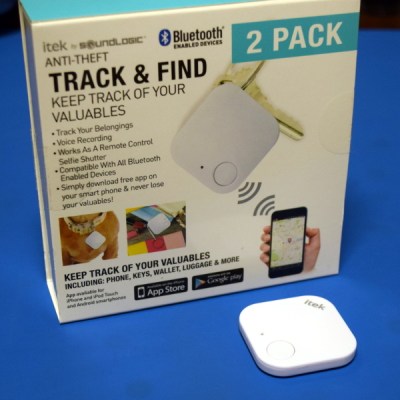 Which is precisely how I came to purchase a two pack of Bluetooth Low Energy (BLE) “trackers” for the princely sum of $10 USD. I didn’t expect much out of them for $5 each, but as this seemed an exceptionally low price for such technology in a brick and mortar store, I couldn’t resist. Plus there was something familiar about the look of the tracker that I couldn’t quite put my finger on while I was still in the store.

That vague feeling of recollection sent me digging through my parts bin as soon as I got home, convinced that I had seen something among the detritus that reminded me of my latest prize. Sure enough, I found a “Cube” Bluetooth tracker which, ironically, I had received as a Christmas gift some years ago. Putting them side by side, it was clear that the design of these “itek” trackers took more than a little inspiration from the better known (and five times as expensive) product.

The Cube was a bit thicker, but otherwise the shape, size, and even button placement on the itek was nearly identical. Reading through their respective manuals, the capabilities also seemed in perfect parity, down to being able to use the button on the device as a remote camera control for your smartphone. Which got me thinking: just how similar would these two devices be internally? Clearly they looked and functioned the same, but would they be built the same as well? They would have to cut costs somewhere.

Determined to find out how a company can put out what for all the world looks like a mirror image of a competitor’s device while undercutting them by such a large margin, I cracked both trackers open to get a bit more familiar with what makes them tick. What I found on closer inspection of these two similar gadgets is perhaps best summarized by that age old cautionary adage: “Don’t judge a book by its cover.”

Internally, both trackers look very similar at first glance. Not to say they actually share a PCB design, but that all the “landmarks” as it were are pretty much the same. You’ve got a single SMD LED, a small tactile switch, a CR2032 battery, a speaker, and of course the Bluetooth chipset. There are some readily apparent differences in the Bluetooth hardware itself, but we’ll get to that in a moment.

Ignoring for the moment the PCB layout, the most obvious difference is the case itself. The Cube case is thick and substantial, with a very nice rubberized coating that reminds me of the lid of a Thinkpad. In comparison, the itek tracker feels like it’s made out of material that’s only a step or two above those plastic Easter eggs. The PCB snaps securely into the case of the Cube, whereas on the itek it’s simply sitting lose inside the case with nothing to hold it down other than the lid itself. There’s also a very nice seal on the Cube to keep dust and moisture out, while the only thing “protecting” the itek is the fact that it comes with a backup for when the first one breaks.

Clearly a lot of money was saved just on the case, both in terms of the engineering and the raw materials. But the cost savings go deeper than that. The Cube has a much more substantial battery holder, while the itek simply has a couple of tabs soldered to the board. The Cube also uses a much larger piezoelectric speaker built into the back of the device to make its chirps and beeps, complete with tabs on the rear of the PCB to interface with it. In comparison, the itek tracker has a small PCB mount speaker.

In terms of material cost its hard to say which one was actually the cheaper option, though clearly there’s less assembly and engineering costs associated with the direct PCB mount speaker than the two piece design used in the Cube. This same engineering “easy route” can be seen elsewhere in the cheaper device’s design as well, such as in the PCB antenna.

The itek uses the standard type of 2.4 GHz PCB antenna we’ve all seen on Bluetooth and WiFi gadgets; a small tinned “square wave” built into the board. The Cube on the other hand is using a rather unique approach, a thin strip that goes approximately 1/4 the way around the PCB which has been peppered with holes. There’s nothing inherently wrong with the antenna on the itek, and conversely I’m not completely clear on why Cube decided to go with such an elaborate antenna on their board, but clearly the former would have been the easier and cheaper option.

A Tale of Two Chips

It’s easy enough to compare between a thick waterproofed case and a flimsy one, or see how the manufacturer saved a few pennies by skipping a fully enclosed battery holder. But under the microscope we find that the changes go even deeper than that. While the Bluetooth functionality of both trackers is effectively the same from an end-user standpoint, the hardware used to deliver that experience is quite different.

Inside the Cube is the well known Nordic Semiconductor nRF51822 Bluetooth system on chip (SoC), specifically the QFAB variant which features a 32-bit ARM Cortex processor at 16 MHz with 16 kB of RAM and an integrated 128 kB of flash storage. We’ve seen this chip used in dozens of projects here at Hackaday because it’s capable and very well supported. Seeing it in a commercial product like this is no surprise at all. In fact, it might have been more surprising if it wasn’t using some member of the nRF family of chips.

That said, the nRF51822 isn’t exactly cheap. A quick check of a few online suppliers shows prices of nearly $2 USD per chip, even with quantities in the thousands. Not a problem for a Bluetooth tracker that retails for $25, but far too expensive if you’re trying to sell the things for $5 and still make a profit.

Somewhat ironically, the itek actually uses two parts to get the cost down: a YiCHiP YC1034 Bluetooth chip and a 64 kB I2C EEPROM to hold its firmware. I wasn’t able to find much information about the YC1034 online, but a listing for the presumably closely related YC1033 on Alibaba comes up with a single unit cost of only $1.5, compared to the $2 volume price of the nRF51822. In volume, the price of the YiCHiP is likely to be pennies. Even with the additional cost of the EEPROM to support it, it will end up costing significantly less than the all-in-one solution from Nordic Semiconductor.

Putting the Money Where it Counts

While designing the itek tracker, it’s clear many design decisions were made on a cost and complexity basis. If it was easier or cheaper, that’s what they went with. On the other hand, with the Cube usability and reliability were more often the prime motivators. Looking at the materials and components used in the construction of these two very similar gadgets, we can very confidently say you aren’t “paying for the name” by purchasing the Cube over its fractionally priced doppelganger. It’s simply a far better made piece of gear.

That being said, not all the decisions are easily so vilified. A flimsy case with no seal has obvious real-world downsides, but if you can replicate the user experience with electronic components that cost less than half of what your competitor is using, is that really such a bad thing? Does the Cube really need such a powerful SoC to get the job done? It wouldn’t be the first time we’d seen a seemingly overpowered Bluetooth beacon.

A close examination of a cloned product and the original that inspired it can be an illuminating look at not only where the money is best spent during manufacturing, but where the design could stand to be optimized a bit. In this case it seems that a tracker with the body of the Cube and the electronics of the itek would be an ideal solution: put the expense in the physical aspects of the device where it’s needed the most, and cut the costs where the user experience won’t suffer.

30 thoughts on “A Cloned Bluetooth Tracker Meets Its Maker”