It started as a joke, as sometimes these things do. [Marek Więcek] thought building a personal radiation detector would not only give him something to work on, but it would be like having a gadget out of the Fallout games. He would check the data from time to time and have a bit of a laugh. But then things got real. When he started seeing rumors on social media that a nearby nuclear reactor had suffered some kind of radiation leak, his “joke” radiation detector suddenly became serious business. 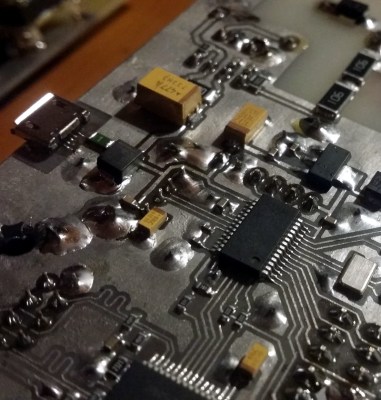 With the realization that having his own source of detailed environmental data might not be such a bad idea after all, [Marek] has developed a more refined version of his original detector (Google Translate). This small device includes a Geiger counter as well as sensors for more mundane data points such as temperature and barometric pressure. Since it’s intended to be a stationary monitoring device, he even designed it to be directly plugged into an Ethernet network so that it can be polled over TCP/IP.

[Marek] based the design around a Soviet-era STS-5 Geiger tube, and outfitted his board with the high voltage electronics to provide it with the required 400 volts. Temperature, barometric pressure, and humidity are read with the popular Bosch BME280 sensor. If there’s no Ethernet network available, data from the sensors can be stored on either the built-in SPI flash chip or a standard USB flash drive.

The monitor is powered by a PIC32MX270F256B microcontroller with an Ethernet interface provided by the ENC28J60 chip. In practice, [Marek] has a central Raspberry Pi that’s polling the monitors over the network and collecting their data and putting it into a web-based dashboard. He’s happy with this setup, but mentions he has plans to add an LCD display to the board so the values can be read directly off of the device. He also says that a future version might add WiFi for easier deployment in remote areas.

Over the years we’ve seen a fair number of radiation monitors, from solar-powered WiFi-connected units to the incredible work [Radu Motisan] has done building his global network of radiation detectors. It seems hackers would rather not take somebody else’s word for it when it comes to the dangers of radiation.