There’s an old joke that all you need to fix TVs is a cheater, a heater, and a meter. If you don’t remember, a cheater was a cord to override the interlock on TVs so you could turn them on with the back removed. Of course, in real life, pro repair techs always had better equipment. In 1939 that might have meant the Supreme Vedolyzer which combined a meter, a ‘scope, and a wavemeter all in one device. [Mr Carlson] acquired one that was in fair shape and made a few videos (see below) of the teardown and restoration.

[Mr Carlson] wasn’t restoring this as an art project, by the way. He plans on using it, so he was less concerned with authenticity and more worried about usability. That led him to do things like remove the input jacks and replace them with BNCs. The video series is a bit of a time investment. Part one is about 82 minutes long! But if you are interested in old gear, this is a chance to peer inside an unusual specimen.

END_OF_DOCUMENT_TOKEN_TO_BE_REPLACED

The gold standard for laser light shows during rock concerts is Pink Floyd, with shows famous for visual effects as well as excellent music. Not all of us have the funding necessary to produce such epic tapestries of light and sound, but with a little bit of hardware we can get something close. [James]’s latest project is along these lines: he recently built a laser light graphical equalizer that can be used when his band is playing gigs.

The final part of the project came in getting the programming done. The brain of this project is an MSGEQ7 which  takes an audio input signal and splits it into seven frequencies for the equalizer. Each one of the seven frequencies is fed to one of the seven servo-controlled shutters which controls the height of each laser line using an Arduino. This is a great project, and [James] is perhaps well on his way to using lasers for other interesting musical purposes.

END_OF_DOCUMENT_TOKEN_TO_BE_REPLACED 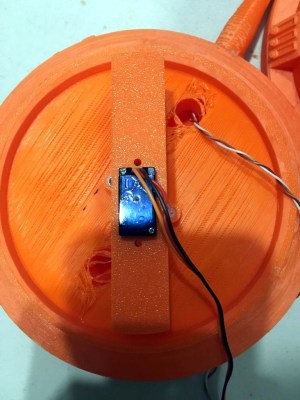 END_OF_DOCUMENT_TOKEN_TO_BE_REPLACED

Pivots for e-textiles can seem like a trivial problem. After all, wires and fabrics bend and flex just fine. However, things that are worn on a body can have trickier needs. Snap connectors are the usual way to get both an electrical connection and a pivot point, but they provide only a single conductor. When [KOBAKANT] had a need for a pivoting connection with three electrical conductors, they came up with a design that did exactly that by using a flexible circuit board integrated to a single button snap.

This interesting design is part of a solution to a specific requirement, which is to accurately measure hand movements. The photo shows two strips connected together, which pivot as one. The metal disk near the center is a magnet, and underneath it is a Hall effect sensor. When the wrist bends, the magnet is moved nearer or further from the sensor and the unit flexes and pivots smoothly in response. The brief videos embedded below make it clear how the whole thing works.

END_OF_DOCUMENT_TOKEN_TO_BE_REPLACED

Today’s story is one of victory and defeat, of mystery and adventure… It’s time to automate the garage door. Connecting the garage door to the internet was a must on my list of smart home features. Our opener has internet connection capabilities built-in. As you might guess, I’m very skeptical of connecting a device to the internet when I have no control over the software running on it. 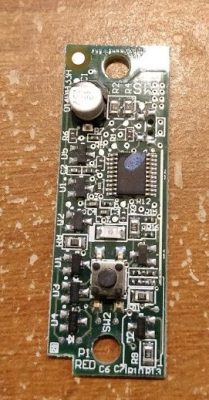 The garage door is controlled by a button hung on the garage wall. There is only a pair of wires, so a simple relay should be all that is needed to simulate the button press from a Raspberry Pi. I wired a relay module to a GPIO on the Pi mounted in the garage ceiling, and wrote a quick and dirty test program in Python. Sure enough, the little relay was clicking happily– but the garage door wasn’t budging. Time to troubleshoot. Does the push button still work? *raises the garage door* yep. How about the relay now? *click…click* nope.

You may have figured out by now, but this garage door opener isn’t just a simple momentary contact push button. Yes, that’s a microcontroller, in a garage door button. This sort of scenario calls for forensic equipment more capable than a simple multimeter, and so I turned to Amazon for a USB oscilloscope that could do some limited signal analysis. A device with Linux support was a must, and Pico Technology fit the bill nicely.

Searching for a Secret We Don’t Actually Need

My 2 channel Picotech oscilloscope, the 2204A, finally arrived, and it was time to see what sort of alien technology was in this garage door opener. There are two leads to the button, a ground and a five volt line. When the button is pressed, the microcontroller sends data back over that line by pulling the 5 V line to ground. If this isn’t an implementation of Dallas 1-wire, it’s a very similar concept.

END_OF_DOCUMENT_TOKEN_TO_BE_REPLACED

What grew out of a university research project is finally becoming real silicon. RISC-V, the ISA that’s completely Big-O Open, is making inroads in dev boards, Arduino-ish things, and some light Internet of Things things. That’s great and all, but it doesn’t mean anything until you can find RISC-V cores in actual products. The great hope for RISC-V in this regard looks to be Western Digital, manufacturers of storage. They’re going to put RISC-V in all their drives, and they’ve just released their own version of the core, the SweRV.

Last year, Western Digital made the amazing claim that they will transition their consumption of silicon over to RISC-V, putting one Billion RISC-V cores per year into the marketplace. This is huge news, akin to Apple saying they’re not going to bother with ARM anymore. Sure, these cores won’t necessarily be user-facing but at least we’re getting something.

As far as technical specs for the Western Digital SweRV core go, it’s a 32-bit in-order core, with a target implementation process of 28nm, running at 1.8GHz. Performance per MHz is good, and if you want a chip or device to compare the SweRV core to (this is an inexact comparison, because we’re just talking about a core here and not an entire CPU or device), we’re looking at something between a decade-old iPhone or a very early version of the Raspberry Pi and a modern-ish tablet. Again, an inexact comparison, but no direct comparison can be made at this point.

Since Western Digital put the entire design for the SweRV core on Github, you too can download and simulate the core. It’s just slightly less than useless right now, but the design is proven in Verilator; running this on a cheap off-the-shelf FPGA dev board is almost a fool’s errand. However, this does mean there’s progress in bringing RISC-V to the masses, and putting Open cores in a Billion devices a year.