There are few things we need to know about Maxima syntax, which differs from the usual languages you may be more familiar with:

With these in mind, we’re prepared to have a look at some functions from the GitHub code. Three simple functions end up being very useful. The first function, par(), calculates equivalent values for parallel resistors or inductors, or for series capacitors. For example:

The second function, vdiv(r_top, r_bot), calculates a voltage divider ratio for the given resistors. In the first example, a 5 V supply is divided by 400 and 100 ohm resistors to yield a 1 V output, while the second example creates a symbolic expression for the divider formed by r1 and r2.

Armed with these three functions plus the built-in power of Maxima, we’re ready to tackle some problems. 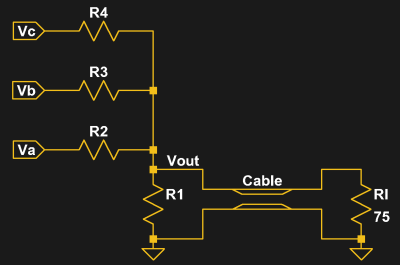 Since 2019 is destined to be the year that hackers fully embrace the power of FPGAs, it seems only fitting to apply these techniques to a common FPGA example. While the introductory microcontroller project is traditionally the blinking LED, simple VGA output is the first “real” FPGA project for many. To generate the analog signals, a few digital output lines are typically fed into a simple resistor-based DAC per color channel, with sync lines handled by two other outputs.

The circuit shown here represents one color channel (say, red), and allows for eight distinct output levels from three bits of input, so the RGB display will be capable of 512 colors. In this case, Vc is the MSB, and Va the LSB. This topology is a simple weighted-resistor DAC, and we choose it over the more common R-2R variety because the latter (pun intended) requires seven resistors instead of four. There are a few things we know right away, namely that our supply voltage is 3.3 V, while the full-scale output (Vmax) for the DAC should be 0.7 V when loaded with the 75-ohm terminator (Rl) inside the monitor (we know this from the VGA spec).

We need to find the values of four resistors (R1 – R4), so we’ll need to come up with four equations to solve. One of them should set the output impedance to 75 ohms to avoid reflections on the cable and the resulting blurriness on the display. From the schematic, we see that the output impedance is simply all the resistors in parallel (imagine Va, Vb, and Vc all connected to ground). So, we define a variable, Zout, using the par() function. Later, we’ll create an equation assigning it the value of 75 ohms. The result we get back shows a nicely formatted version of the formula:

We need three more equations. There are a number of sets that one might choose, but maybe the simplest way is to consider the output voltage when only one of the input lines is in the high state. For instance, when just the MSB is high – the state {Vc=1, Vb=0, Va=0}, or “100” – the resistors form a voltage divider from Vcc with R4 as the top resistor, and all the others in parallel as the bottom resistor. We use the vdiv() and par() functions to define a variable V100 for this state, which we’ll also create a subsequent equation for. The output is a messy expression to us, but Maxima isn’t bothered by it.

Similarly, when only Vb is high (the “010” state), we can define V010 with a similar voltage divider, this time with r3 as the top resistor, and all the others paralleled on the bottom.

Finally, applying the same logic to the “001” state yields an expression for V001.

Now, we can form the four equations and have maxima solve() them. The first equation sets the output impedance to 75 ohms, while the remaining three set the voltage outputs for the states we’ve chosen. For a 3-bit DAC, the MSB has a weight of 4/7 of the full-scale voltage, the middle bit has a 2/7 weight, and the LSB a 1/7 weight. Equating the three voltage states with these fractions of Vmax gives us the other three equations. Along with the equations, we also pass a list of variables to solve for: the resistor values.

The output shows two things: our desired solution, and the fact that the output of computer algebra packages can be messy. In this case, the way the problem has been solved has introduced a number of “solution” families that we don’t particularly care about. The last one in the list, however, is obviously what we’re looking for.

Of course, selecting these values will change the performance of the DAC, so it’s best to check what these resistors actually produce. The ev() function evaluates its first argument using the context of the second, so in this case, we’re substituting the preferred value resistors. (The fpprintprec variable controls the floating point printing precision; here it has been set to four significant figures.)

The outputs should ideally be [75, 0.4, 0.2, 0.1]. I’d probably be OK with these values, maybe because I have a large stock of 5% resistors, but if we wanted a closer result, we could simply find the preferred values from the E96 (1%) series instead.

There are a couple of footnotes to this analysis. First, we’ve ignored any output impedance for the drivers into the DAC. If we know their output impedance (or can measure, guess, or deduce it from graphs in the datasheet), we can subtract it from each input resistor to compensate. We’ve also conveniently left out gamma correction, which unfortunately can’t be done with just a resistor network. Finally, this is just one way to calculate the resistor values. You could instead use the knowledge that R1, R2, and R3 should be related by factors of two to simplify the calculations, although maybe the point is that you don’t have to be so clever. 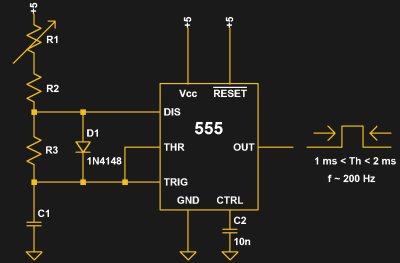 As a second example, consider the design of a servo controller using the ubiquitous 555 timer IC. Let’s say we have a 10 k potentiometer (R1), and we want to control the servo position with it. We need the 555 timer to output pulses between 1 ms and 2 ms, corresponding to the full travel of the servo, as the potentiometer travels its range. We also decide that the pulse repetition rate should be 200 Hz or lower. Consulting the Wikipedia page, we find that the addition of a diode to the typical 555 astable circuit lets us have duty cycles less than 50%, which we need to generate the pulses. The page also gives us equations for the high time (Th) and low time (Tl) with the added diode.

To start the design, we dump everything we know into variables. We choose a 5 V supply for Vcc, and assume a forward voltage of 0.7 V for the diode (which we’ll revisit later). The expressions for the high time (Th) and low time (Tl) are direct translations of the equations given on the Wikipedia page, while the frequency (F) is simply the reciprocal of the period.

Given these definitions, we can now write three equations to constrain the solution for the three unknowns, r2, r3, and c1. We use the ev() function, which evaluates expressions given a list of relationships. For instance, the first equation, “ev( Th = 1e-3, r1 = 0 ),” says that the pulse width should be 1 ms when R1 is set to zero (rotated all the way to the left). Likewise, we set the pulse width to 2 ms with R1 set to its maximum resistance (10k). Finally, the last equation says that the frequency should be 200 Hz with R1 at zero. These three equations are enough to solve for the three unknowns.

Again, the results are not all values we’re likely to find in the junk box, so we can choose the closest 5% values.

So, we can check our parts stash for 10k and 56k resistors plus a 100n capacitor. If we wanted to be cautious, we could also check that these substitutions haven’t substantially changed the solution by evaluating the pulse width and frequency with R1 at both extremes.

The results look good: 1 ms to 2 ms pulses at between 170 Hz and 205 Hz. But, of course, this only validates that the chosen components work with the circuit model we’ve chosen. Underlying this model is the assumption that the diode forward voltage is a known constant 0.7 V. In reality, this forward voltage varies with the current through the diode: a quick peek at the 1N4148 datasheet shows that it’s probably around 0.5 V at the currents involved in this circuit. So, before building the circuit, we might want to re-run the calculations using this value. Either way, the results get us in the ballpark and ready for the next step, whether that’s simulation or prototyping.

Here’s a final simple example that I frequently use for creating PCB footprints. In Eagle, footprints are created by placing pads of a specified size at a specified center point. Some datasheets give their footprints in this format, while others force you to do some math to convert the dimensions. I used to do these in my head, but after receiving a trio of purple coaster PCBs due to a stupid mistake, I make my computer do the work now. Two quick equations can be found by inspection, and maxima does the rest. In this case, I express the dimensions the datasheet gives in terms of what I want: the size (h, w) and position (x, y) of the pads.

Typing in the equations only takes a few seconds, and greatly reduces the probability of a stupid mistake relative to doing the calculations manually.

If you’re intrigued by Maxima and want to get started on your own, there are many tutorial links on the github.io page. There also a number of examples on the web specific to circuit design: an analysis of damping in oscillators, some introductory circuit analysis, applying differential equations to RC circuits, and transistor amplifier design (PDF warning).

Of course, computer algebra isn’t the only way to solve circuit problems. You could also use a good-old spreadsheet.