It turns out that Shanghai is a very long way from my home in Wisconsin. I’ve traveled here for Electronica China, and although it made for an incredibly long travel “day”, it turned out to be quite enjoyable. I hacked some hardware on the plane ride, I took a maglev to my hotel, met up with Sophi for drinks, and explored the neighborhood for some Shanghai breakfast.

Our planet is roughly 24,000 miles in circumference and I flew a bit more than 8,000 miles to get here. It’s unbelievable how easy it is to get from one place to another.

My first flight was an easy couple of hours from Madison to Atlanta. I was concerned about making an international connection with just 55 minutes to do so, but the people-moving systems of that airport meant that from the moment my first flight stopped at the jetway it only took fifteen minutes to get to my next gate, well before boarding. I’m traveling with only a backpack, which will make more sense soon. 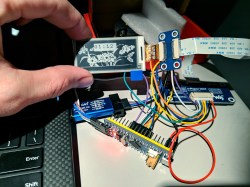 Internet was good for the entire flight — satellites are everywhere I guess. I bought a 24-hour international pass for $28, a great price considering I got a ton of work done during the 16-hour flight from Atlanta to Shanghai. Of course, I had some fun too.

After catching about 3 hours of really sound sleep I pulled out the STM32 I’ve been playing with and hooked it up to the ePaper display I got just a few days ago. I was able to get the sample code up and running through the Arduino IDE and plan to spend some time on this trip getting it working with a plain old Makefile in C.

Maglev to the Hotel

I really enjoy having good public transit to and from airports and this one is by far the coolest yet. Shanghai has a maglev train — one that floats on, and is propelled by magnetic repulsion. It travels 30 kilometers in about 8 minutes!

I walked about 25 minutes to my hotel, grabbed some Yuan from an ATM, and met up with Sophi Kravitz for a drink before bed. My head hit the pillow at midnight and I was awake again at 5:00 am but considering the 13 hour timezone difference I think I’m doing quite well.

My hotel is in a neighborhood. I’ve heard that breakfast on the street is fantastic, and having awoken so early that became my mission. Just around the block from the hotel I came across my first three street vendors and my favorite food so far.

This is grilled bread with a cooked egg added, some delicious turkey, lettuce, and sauces. They put it in a paper sleeve and plastic bag so you can eat it on the go. These carts were busy with locals beginning their day.

I was amused by the bathroom light and fan switches

I kept walking and sampled food at different carts that I found. It seems about every other block you’ll come across storefronts with grills, fryers, and steamers out front. The pork filled dumplings were delicious. The fried bread was slightly sweet and pleasing. I saw large flat griddles used to make egg wraps filled with sauces and vegetables. I will try this tomorrow and will be on the lookout for rice stuffed with pork as well.

Just before rain blew in I headed back to the hotel and arrived at 7:20 am to work on this article. . This afternoon I’m off to Electronica Asia to see what interesting things await. I’ll write about what I find in tomorrow’s installment of Hacker Abroad.

30 thoughts on “Hacker Abroad: A Very Long Way To China”