I spent a full day on Saturday in the electronics markets of Shenzhen, China. The biggest thing to take away from this is the sheer scale of business that is going on here. It’s a consumer-electronics tourist trap, it’s a manufacturing and wholesaling nexus point, and it’s a community of people working incredibly hard to get ahead in life.

A big thanks to Scotty Allen for introducing me to several store owners in the markets, and to a translator who went around with me. These connections were crucial for an inside look on the lifestyle of Huaqiangbei (HQB).

New booth sells LCD displays for art. They look so good it was hard to believe they weren’t paintings

Since I last visited here four years ago the walking road of HQB has been renovated. The result is glitzy storefronts selling high-end cellphones, laptops, quadcopters, LED POV displays, and any other type of electronics for general consumption. This is serving a market of non-technical tourists, but the hard-core low-level markets are still easy to find. As you move from building to building, the layers of focus change, from power strips, product enclosures, and component dev boards, to resistors, capacitors, and loose LEDs.

Booths will deliver in person but they also ship orders to the customers. The amount of shipping happening here is incredible. Scotty took me over to see the street where most shipping services are located, lining a few blocks amidst the buildings of the markets. Carts full of boxes are wheeled up and dropped at DHL and every other shipper you can think of, then loaded up again with bales of flat, empty boxes and other packing materials for the return trip to the stores. Many of the people pushing the carts are runners for hire, schlepping the boxes back and forth so the shop owners don’t need to leave their booths. Scotty tells me that later in the day the sidewalks will be lined with mountains of stacked boxes waiting for the trucks to arrive for shipment.

On the south side of the street, the consumer electronics are gone, replaced by the cellphone parts and repair markets. The scale of the cellphone industry worldwide is observable from what happens here. At every intersection in a lower floor of one of the buildings, you find groups of people crouched on the floor, sorting through boxes with hundreds of used phone logic boards being salvaged for parts. Every few paces you can find a booth with someone manually sorting the chips lifted from these boards, getting them ready to put back on reels and resold. Who is buying these used components, and what kind of money can be earned from this chain of reclamation is difficult to tell. But I like the idea of reuse rather than sending functional parts to the landfills.

Back out in the open, we head to the Xuan Hou cellphone repair tools booth which is run by two brothers. They met with me for a few hours to record the story of their business for the Hackaday Podcast which will be published in the coming weeks. The two left very low paying jobs to seek their fortunes in the markets, borrowing money from family to do so, and had an incredibly tough go of it for several years. Despite frequent setbacks, their tenacity prevailed. They now have a very popular booth, and are building a brand around the tools they sell. Xuan has traveled to Vietnam and Japan in seek of high-quality tool manufacturers. You’ll find their logo on all kinds of products in their booth, like spools of wire, screw drivers, and tweezers of every size.

They served delicious tea throughout our interview

Yeke (right) and his partner

I also visited the studio of a company run by Yeke and his partner. They’re manufacturing parts used to add features to stock smartphones. These products are not easy to design since phones are not meant to have room for extra hardware. Their first products were lighting modifications for iPhone — hardware built on flexible PCBs that would add LEDs to the back panels of phones to pulse to the beat of music or to show notifications. This expertise led them to develop aftermarket inductive charging circuits for iPhone. Since then, Apple has added this feature to their phones, so the company has gone on to enter the Android market.

The original iPhone add-on took nine months to develop, but at this point they can adapt the design to a new Android handset and be manufacturing in about 1.5 months. They’re also working on phone cases that have integrated electronics. It was a delight to discuss their journey over traditional tea, in a studio 25 floors above the markets — a sign of great success for businesses based there. 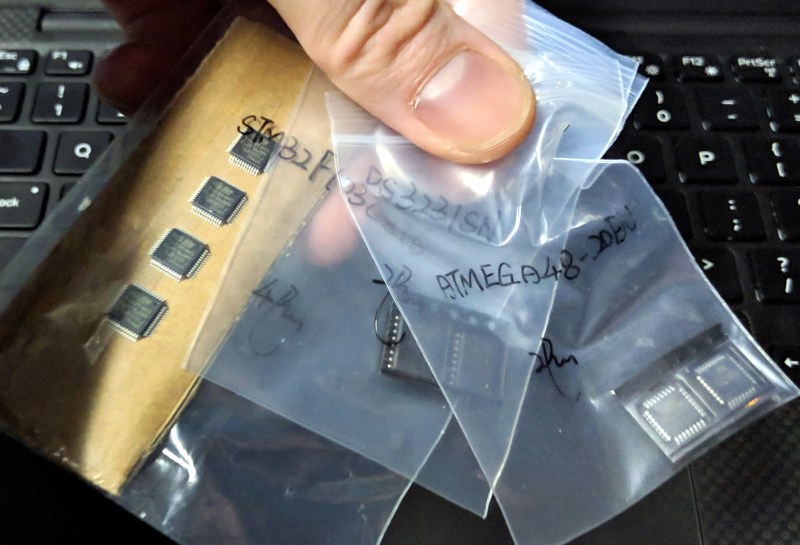 My final interview of the day was with a chip broker in the SEG building. You can send a list of parts in using WeChat and pick up the order on the same day, a service I tried for myself. Endy’s parents began the business 15 years ago when he was at University and he has since taken over. In those days, his folks would phone their contacts around HQB to source the orders, but now there’s a computerized inventory that makes it easy to send runners to pull together any bill of material.

Food and Fun in Shenzhen

Getting around Shenzhen is pretty easy. The subway is extremely convenient, with large touchscreens (in English or Chinese) used to select your route. They pop out a green plastic RFID token used to enter and exit the station.

Must be something good going on here

Upon arrival in HQB I grabbed a coffee from McDonald’s and set out to find the best food stall the area had to offer. I find with street food, the longest line is best, so I found this place. I had no idea what the food was, and the server was dishing it out as fast as humanly possible and still not keeping up with the line.

After using Google Translator app to speak with the person in line behind me, I figure out the price and walked away with my meal. The first three bites were delicious, with rice noodles, sour (pickled?) greens, something that might have been a peanut sauce, and a clear red-ish sauce. But then the spice hit me and I had to stop eating what I now know is incredibly hot Szechuan food. Oh well, it was an adventure.

Red Bull with pop-top and straw

Xuan in front of his shop poses with Mike Szczys

Interestingly, the drink of choice with those working in the scrappy cellphone markets is Red Bull. You’ll find these squat cans with straws littered everywhere in the late afternoon. Having stopped to say goodbye to my new friend Xuan, it was time to head to “Secret Sushi”.

Batteries to charge your phone while dining

This is an occasional gathering of expats and engineers working in the area for hardware companies. The secret name comes from the restaurant being difficult to find. It was a grand evening of all-you-can-eat-and-drink for 220 Yuan (about $33). The food was delicious with a huge variety.

I didn’t realize the trains stop early in Shenzhen, and since I had already missed the last one there was no harm staying out late into the night for a stop at the whiskey bar. One small thing I found interesting is that bars and restaurants around the city have these kiosks to rent batteries to charge your phone while you dine.

This is Not the Shenzhen Airport

This is not the Shenzhen Airport

I’m happy I didn’t miss my flight. Well worth 50 RMB

All in all I spent about 19 hours on the go on Saturday. The recorded interviews are amazing so keep your eye (or is it ear?) on the podcast. Sunday morning I left to travel to Vietnam for another packed Hackaday Meeting and touring the markets there. That’ll be the topic of the next installment of Hacker Abroad. But I wanted to part with a word of warning.

If you use Google Maps to take the subway to the Shenzhen Airport you may be surprised. My hotel was on Line 1, and the end of that line is “Airport East”. Unfortunately, that’s actually an abandoned terminal on the wrong side of the runways. If you make this mistake, you’ll be happy to pay this gentleman 50 Yuan to take you 15 minutes on the back of his scooter to the correct airport. Oops.