Packed House for the Meetup at Seeed 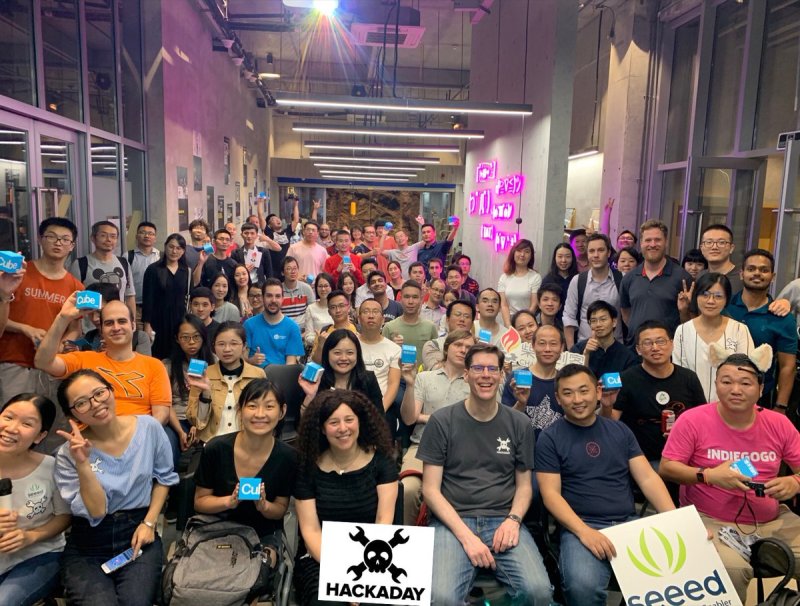 When we arrived at  X.Factory the space was already packed with excited hackers enjoying pizza, popcorn chicken, and beer (Budweiser is really popular here from some reason). Sophi Kravitz and I gave a talk on the 2019 Hackaday Prize China — a design challenge focusing on product development that can be entered with Chinese language documentation. After five years of the Hackaday Prize there are so many amazing entries to show off that it’s really exciting to share these stories with people who missed them the first time around, and who are exited to join in on the challenge.

The first hardware talk was a story about iterating on PCB business cards that can be cut out and notched together to created 3D sculptures. In red you can see the first iteration of the card which forms a robot. But Nico received so much positive feedback that he kept going. Along the way he began incorporating circuits and components into the designs and you can see the walker he built, along with a Millennium Falcon and a few others.

It was really cool to see a talk about a project I had recently noticed on Hackaday.io The Robo HAT MM1 is gearing up for a campaign on Crowd Supply and it’s great to see the team getting out and showing demos of their work. This a logic board aimed at making it a lot easier to get into controlling servo motors for robot builds. The form factor is as a daughterboard (hat) for Raspberry Pi but it is also capable of doing standalone control thanks to the onboard microcontroller. It’s a ATSAMD21 running Circuit Python, and the board includes an IMU. The funniest demo was a robot arm with multiple servos controlled by the axes of the accelerometer — but trying to figure out which axis mapped to each arm movement made serving yourself a sip of soda a messy and hilarious task. Linda Luo got the idea for RoboHAT after burning out some Raspberry Pis while working with students to build Donkey cars, a tensor-flow based autonomous racing platform, back in 2017. 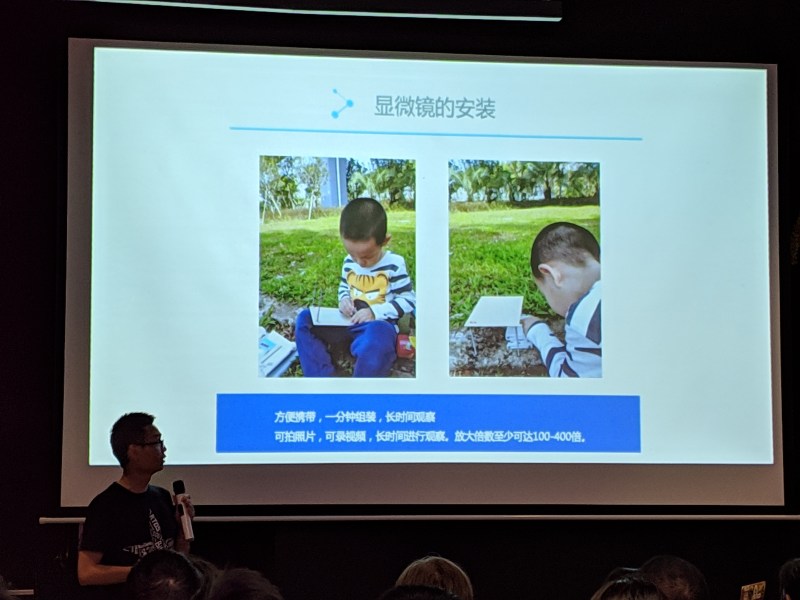 I didn’t have a chance to speak with the creator of this project but wanted to mention it since I really like the backstory. It’s a microscope project using an iPad. There is a fixed platform for the iPad, and then a moveable platform designed like a miniature scissor lift. Put your subject on the lift platform and adjust until the magnification is in focus. It’s an inexpensive way to help your kids get excited about science by looking at leaves and other flora under simple magnification.

The Open Ocean Camera is an underwater research platform that was inspired by the Open Source Underwater Glider, winner of the 2017 Hackaday Prize. We have very few tools available for making long-term ocean species observations. Putting a camera out there brings with it challenges of keeping the power flowing, storing images, and retrieving them. GoPro cameras have been used to do this, but they require frequent intervention to swap out batteries. This project utilizes a simple power bank to keep a Raspberry Pi camera going for much longer. This can run longer and requires far less visits to refresh batteries and pull down the content. 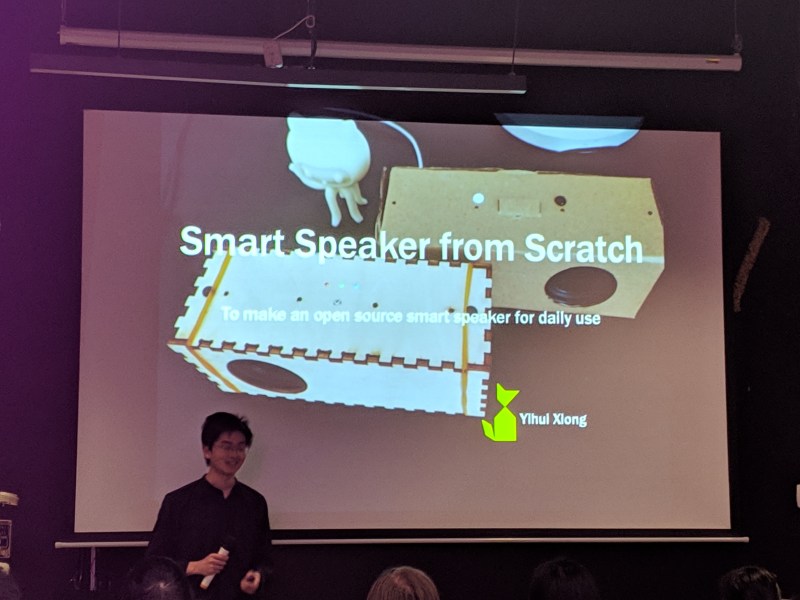 There was a presentation on a smart speaker build. The project creator makes a good case that making a smart speaker is better than hacking an existing once because it opens up a lot of added functionality. He walked the audience through several iterations of the prototype and showed of the current version which uses a Raspberry Pi, ReSpeaker microphone array, and a single speaker all in a laser cut enclosure.

It was really fascinating to meet the Dexta team at this event. They didn’t do a talk, but they did bring along their haptic feedback VR glove and asked me to try it out.

The gist is that you wear one on both hands when in an immersive VR environment and servos near the knuckles generate force feedback based on virtual objects you are gripping. The difference between solid and squishy items is pretty good. And holding a virtual beating heart in my hand had each finger pulsing. There is about 6 hours of battery time in each glove, and the team has been through around 50 prototypes to get to this point. They’re opening up sales soon, but at around $23,000 for the pair it might be a while before you have a set in your livingroom. Welcome to the oasis.

Cellphone Repair in the Hardware Markets

Earlier in the day Scotty Allen and I headed to the Huaqiangbei hardware markets to see what we could see. The plan was to walk through as we recorded audio for the Hackaday Podcast. (Please subscribe so you get an alert when this episode is published.) Scotty is of course an  expert on life in these markets as he’s been covering the topic on his Strange Parts YouTube channel.

Taking photographs inside the buildings is more or less forbidden so unfortunately I can’t share too many photos with you. But one special treat came about when we stopped by the Xuan Hao booth. This counter is selling cellphone repair tools and is run by two brothers who I had scheduled a podcast interview with to take place on Saturday. Their booth is packed with interesting tools, one of which is the cellphone screen alignment jigs used to replace the glass of a cellphone screen when the LCD is still good. I was asking questions about how the Optically Clear Adhesive (OCA) that glues the high-tech sandwich together comes — as a film or a liquid. Their booth doesn’t sell the OCA, but the booth right across the aisle does so they borrowed a sample and we continued talking. As I asked more questions, Xua said why don’t we go watch it being done?

His friend Ming owns a booth specializing in cellphone screen repair. Interestingly, Scotty profiled this process in-depth in one of this videos (about 6:11 into it) — the tools and processes are the same, but this is a different booth. After watching for a few minutes they asked if I wanted to make a video of the process. Yes is the only answer to that, what a treat! Shown in the video are the following steps:

The process is fast because these technicians know their craft. The entire encounter is a lesson on the power of the markets. Need something done? Need a raw material? Want to learn a process? Everything… everything… can be done here if you have the right relationships.

Sophi and her sister Anna enjoy a meal together

Bug on a stick

At either end of this very long day was incredible food, drink, and friendship. Upon meeting up with Scotty near lunchtime he took us to a great restaurant. At some point I’ll detail the WeChat life integration experience but this article already grows long. The gist is each person at the table can scan a QR code and order (with pictures which is clinch for discovering what you’re about to eat) and the food will just start to show up. Yum!

Eric Pan, Lily, and Violet took us to a craft beer place

Street art near the craft brewery

I’m very thankful for Lily, Violet, Eric Pan and everyone on the Seeed Studio team. Not only did they open their doors and turn out an incredible crowd for the Meetup, but they put on one heck of an after bar. We stopped at a place with great beer and delicious appetizers just across from the building where the original Chaihuo Makerspace was located. Eric told us this is one of the first factory parks in Shenzhen. In a city known for tearing down everything old and building new it was fun to hang out in a space that has been renovated and updated for new use.

Next Up: Meeting with Shop Owners

My Saturday is booked solid meeting with electronics market shop owners. Most of this time will focus on audio for the podcast, but I’ll share some fun bits in the next installment of Hacker Abroad.

13 thoughts on “Hacker Abroad: Cellphone Repair In Huaqiangbei And A Huge Meetup At Seeed”