For the past five years, the Hackaday Prize has been open to engineers from around the globe. But this year we’re stepping up the effort to help involve a lot more people from China who enjoy developing new products. On Wednesday, a large audience gathered at the Bom2buy booth (one of Supplyframe’s China-based companies) to celebrate the beginning of the 2019 Hackaday Prize China. This design contest is specifically for hackers, designers, and engineers who are more comfortable documenting their development process in Chinese. Up to ten finalists from the Hackaday Prize China will be invited to the final round of the soon-to-launch Global Hackaday Prize with the assistance of translation services in order to share their product development process with in English. We know there’s all kinds of amazing work going on here in China and this will make it easier to share those stories with the non-Chinese-speaking Hackaday community.

It was great to meet some local hardware hackers at the launch ceremony. This is Yoyojacly who gave a talk about the Raspberry Pi based arcade console he built. This is obviously an eye-catching build, and I got to speak with him for a half hour or so afterward and his projects run deep! He and his office colleagues have automated everything from the fish feeder to the lights. They recently picked up a used LIDAR sensor and are working on building an autonomous robot to take out the garbage after seeing much success with their Donkey Car (a tensor-flow based autonomous rover) project. Yoyjacly is a member of the Mushroomcloud hackerspace here in Shanghai.

It’s really cool that two people from the Dexter robotic arm team were able to make it to Shaghai for the conference. Dexter won the 2018 Hackaday Prize and were invited to exhibit in the Bom2buy booth. Dexter has silky-smooth movements and great positional awareness thanks to its high-accuracy optical encoder scheme. It had no problem attracting a crowd throughout the day.

Cool Machines That Build Parts and Assemblies for the Electronics Industry

Cutting, stripping, and tinning 16 wires at once

Six years ago I attended Electronica in Munich, but I don’t remember seeing the sheer number of eye-popping automation displays I found on Wednesday at Electronica Asia. Perhaps this is because technology has advanced quickly over those years, but I suspect it’s more that the close proximity to such large manufacturing hubs means it is easier to transport these machines for demonstrations.

To really grasp what these machines can do you really need to see them in action, and I plan to put together video of many examples once there is more time to do the editing work. There were demos of machines that separate silicon dies and put them into trays and die-bonding machines that place the slivers of complex silicon and connect them to the metal leads.

Legs of chip packages (likley TQFP) on a newly cut frame. Silicon die is placed in center and a bonding machine makes connections to the leads

Components still on the frame, put plastic housing has now been injection moulded around the silicon die and metal leads

Molds for the plastic housing on microSD cards

Wide view of the wire-cutting robot shown in the animation above. 16 spools of wire are feeding into this machine.

I saw the injection machines that create the familiar black plastic packages for those chips. There were IC sorting machines used to automatically test completed parts and to flash code to microcontrollers when you order them preprogrammed.

There was an entire hall devoted to cable making where mesmerizing robotic precision measured wire to exact length, cut and stripped each end, crimped connectors onto each, and inserted them into plastic housings. All of this is a dizzying stack of manufacturing that has been optimized for efficiency at every conceivable step from raw material, to component, to assemblies that go on to produced finished products. And it pulls back a curtain that was previously hiding remarkable industrial automation.

Up Next: Visiting a Favorite Chip Design Company, and Heading to Southern China 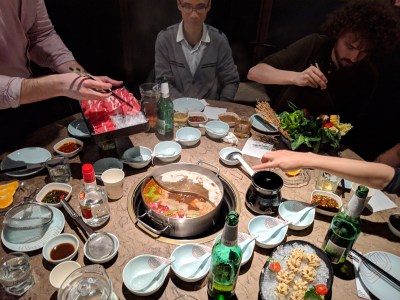 After a very long day at a very large conference, we unwind with amazing hot pot! “Noodles” on ice in bottom right are actually tofu. Red-tipped bottle is delicious plum liquor I lovingly refer to as “jet fuel” (use with caution). Alas, this my only full day in Shanghai.

On Thursday morning I’m meeting up with Ivan Grothotkov at Espressif, makers of the ESP8266 and ESP32. We plan to record a segment for the Hackaday Podcast to cover how he joined up with the company and what they’re up to these days. Later in the afternoon Sophi Kravitz and I will depart for Shenzhen where we’ll meetup up with our friend Scotty Allen and head to Seeed Studios’ X.Factory for a Hackaday meetup. I’ll let you know about those adventures in the next installment so keep your eye on Hackaday!