While we hosted many Maker Faire veterans as repeat visitors, we also gladly welcomed newcomers curious to see what people have created. [Sam Freeman] was one of many who were happy to break down their projects to beginner-friendly pieces. His LED goggles started from an Adafruit tutorial and continually evolved to the version today. [Daniel Young] was equally friendly explaining his magical Melty Cube spinning on the end of this LED wizard’s staff. It features two ESP8266 working together to avoid the need for an expensive slip ring: one lives inside the cube driving LEDs, the other handles the spinning motor. Being welcoming, approachable, and willing to explain is how we grow our community.

[Garrett] is a man with many ideas, judging by the number of illuminated light bulbs over his head. Built as a quick hack for a disco party, the sound-reactive electronics were repurposed from a pair of LED glasses. (Look at how the USB power enters the helmet.) WS2812 LEDs were wired inside plastic light-bulb-shaped party favors. It doesn’t get as hot as we might think, but it is heavier than it looks. In hindsight [Garrett] wished he hadn’t cut off the helmet’s original chin strap early in this project.

It’s not always about the LEDs, though! [Scorch] brought two of his String Shooters whose instructions have been posted online. Building one will depend on size of available traction material on the wheels. His large unit was built around a bicycle inner tube, and the smaller one (video) built around rubber bands used in dental braces. In addition to the two string shooters, he also brought an ultrasonic levitator based on instructions posted by Make. It’s one thing to read about them online, it’s quite another to see a small flake of aluminum foil actually float in the air in front of us. 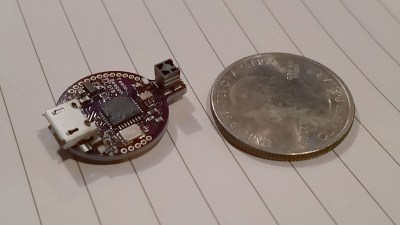 Similarly, it was quite a treat to see tiny Femtobeacons in person. Yes, I can show you a picture of one next to a U.S. quarter dollar coin for scale, but it’s not the same as holding one in my hands hoping not to drop it on the floor of a dark bar. Creator [Femtoduino] documented the project on Hackaday.io and also sells units on Tindie. Other Tindie sellers were present, some brought their products for sale and others brought recent projects just for fun.

[Maniacal Labs] brought a large 7-segment display previously seen at KiCon. This single digit represents a conversation piece as well as proving concept for a project which will feature 12 of these digits.

A pair of mostly 3D-printed Mars rover models were on display, one by yours truly (wearing a raincoat) and a success story of sharing online. [Marco] found the Hackaday.io project page and built his yellow rover incorporating his own customizations. Maker Faire was the first real world meeting of these rover siblings and their creators.

Our Hackaday Prize this year encourages participants to work through how their idea can scale beyond single prototypes to volume production. We believe putting them in people’s hands will multiply our collective ability to improve the world. So it was ideal for us to join forces with Kickstarter for this event, inviting product teams seeking funding via Kickstarter. These innovators have put a great deal of thought into their ideas, and this is an opportunity for us to learn from them.

One of the Kickstarter projects present is Kinazium, offering educators a construction set for building small robot mazes fit for palm-sized robots. Teachers in classrooms appreciate being able to get maze parts without scissors or knives, and put them together without tape or glue.

Another Kickstarter project team present is Chatterbox, offering the technology of smart speakers like Amazon Echo and Google Home but without the retail advertising surveillance baggage of those popular devices. A cute appearance appeals to children, and a COPPA compliant software stack protects them online. We think these features will also appeal to security-conscious adults.

These and many more projects adorned the tabletops of B Street Station, making it the best place to stop after Maker Faire Saturday. We would like to thank everyone who joined our party. A place to share our work, our curiosity, and our passion to make something cool. We all inspire each other to turn our ideas into reality, and we hope to see everybody (plus new faces too) next year! 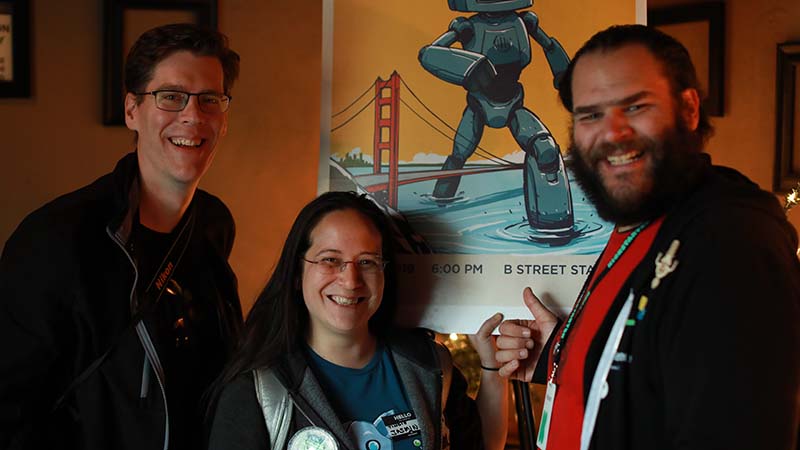 5 thoughts on “Great Hacks At Our Maker Faire Bay Area Meetup; From Helmets And Goggles To Rovers And String”