The real power of 3D printing is in infinite customization of parts. This becomes especially powerful when you combine 3D printing with existing materials. I have been developing a few simple tricks to make generic fasteners and printed connectors a perfect match for aluminum extrusion, via a novel twist or two on top of techniques you may already know. 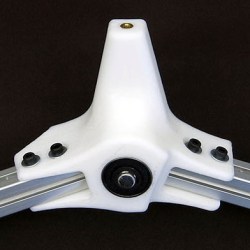 Work long enough with 3D printers, and our ideas inevitably grow beyond our print volume. Depending on the nature of the project, it may be possible to divide into pieces then glue them together. But usually a larger project also places higher structural demands ill-suited to plastic.

Those of us lucky enough to have nice workshops can turn to woodworking, welding, or metal machining for larger projects. Whether you have that option or not, aluminum extrusion beams provide the structure we need to go bigger and to do it quickly. And as an added bonus, 3D printing can make using aluminum extrusion easier and cheaper.

Everything is Built from Aluminum Extrusion

Aluminum extrusion beams are no stranger to these pages. We have a general overview of them and we have seen so many projects using extrusions, like satellite trackers, Rubik’s cube solvers, and automated drone charging stations. Many popular 3D printers have frames of aluminum extrusion as they offer higher strength and superior dimension tolerances than 3D printed plastic.

But creativity is quickly stifled by connector selection, as the vast majority of connectors in the catalog are for 90-degree joints of one flavor or another. Angled connectors are in the minority, and usually limited to a few angles like 30, 45, and 60 degrees. There isn’t enough sales volume to justify making connectors with angles that only a few people would ever use. This is where our 3D printer re-enters the picture, as a factory for low volume niche parts. 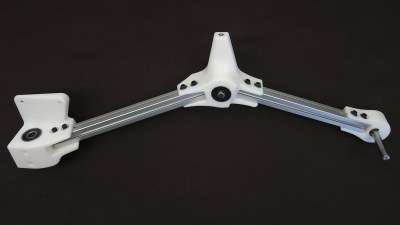 Combining custom with stock allows us to design projects leveraging the strengths of each part: the aluminum extrusion provides generic structure, with the 3D printed plastic linking them together in a project-specific way. We’ve covered 3D-printing right angle connectors before (or in conjunction with zip-ties) but today we’re focused on 3D printing’s advantage for very precisely building arbitrary angles.

The CAD to design for these connectors is pretty simple. It is typically a matter of subtracting out a rectangular solid for the beam itself, followed by subtracting a few cylinders to create mounting holes for fasteners. Bolting to an extrusion on three sides (like the rocker arm example here) is usually strong enough for 3D printed plastic projects. This means we can often skip the “top” (relative to print bed) side for easier printing. Sometimes we’ll want that strength badly enough to deal with bridging or some other technique to give us that fourth side, but we’ll leave that challenge aside for now. The point is, that you can give this a try with minimum effort and adopt more of the technique as you get used to it.

An Example: Hard Angles Made Easy

I’ve been working on a design for a rocker arm sub-assembly and it makes a perfect example of this discussion. It is part of the suspension system for a robot I’m building. The entire design is far too large to print as a single piece, so I divided the object into aluminum segments linked together by 3D printed parts. Here are the wireframe diagrams: 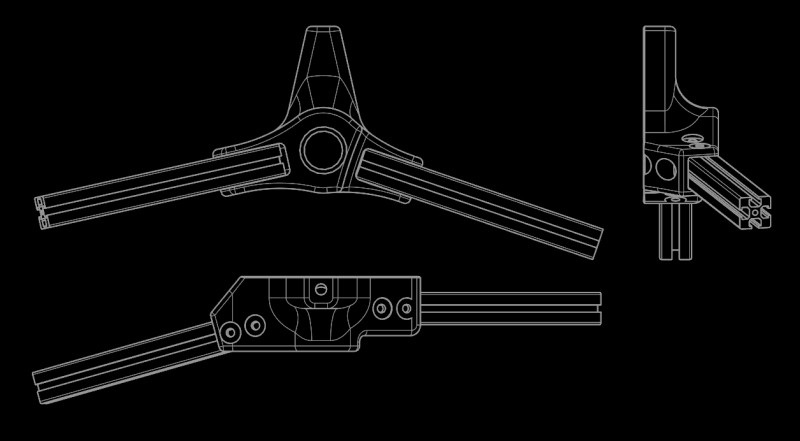 Look at the relative angles of these two extrusion segments — no extrusion vendor would stock connectors at these angles and if they did you still wouldn’t get a pair of bearings at its center and a mechanical linkage up top. Such project-specific details make this hub ideal for one-off 3D printing. As for the arms, we could spin up a 3D print job for two long rectangular blocks of plastic. But why? The only project-specific detail here is length, which can be cut far faster than an identical length of plastic can be printed, even if the cutting was done by a hand-held saw.

This article focuses on where the aluminum meets the plastic so I’m not going to go deep into the details on setting up your angle or removing the area for the extrusion. But it’s worth noting a few general 3D printing behaviors that strongly impact this construction technique. Select your layer orientation wisely — when printed parts are pushed beyond their limits, they generally fail by fracturing along layer boundaries. Use at least two fasteners along each axis, spaced approximately as far apart as beam width, to spread out workload. Using just one fastener turns that single point into a fulcrum multiplying forces on our printed parts, and we don’t want that.

One more point to consider is overhang when bolt holes do not align nicely with the print bed. We can help our printer bridge odd bolt head surfaces by creating a thin layer (2-3 print layer heights thick) covering the bolt hole which can be cleaned up with a drill after serving its purpose. These are easier to remove and consume less material than the typical solution of printing supports.

The Secret Sauce: A Replacement for T-slot insert, T-nut, T-whatever

Once we have a project-customized connector designed and printed, we proceed to assembly where we face the other hidden gotcha of aluminum extrusions: specialty fasteners. Called T-slot inserts, T-nuts, or some similar name, they are shaped specifically to fit in the slot of an aluminum extrusion beam. They are also extremely expensive. Not necessarily in an absolute sense, but certainly relative to commodity hex nuts of similar size. Our rocker arm example is designed for 15mm Misumi 3 Series extrusions. Misumi offers several specialty nuts for this extrusion, the least expensive “economy” model HNSQ3 costs $8.28 for a bag of 100. In contrast, our trusty hardware supplier McMaster-Carr offers generic M3 hex nuts at $0.88 for a bag of 100. (Catalog #90592A085)

Before we give in to the temptation of a 90% discount, let’s do a quick review of what we trade off by using generic nuts. The first and most obvious barrier is that a particular extrusion beam’s profile might not allow a generic nut to be used. Second, a generic nut will not engage slot interior surfaces to the same degree as a nut tailored to the extrusion profile. This usually means we can’t torque the bolt down as tightly before something slips. Third, higher end specialty nuts provide friction against the extrusion, either by its shape, size, or an additional thin metal spring that holds the nut in place. Nuts that stay at position instead of sliding around in the slot eases assembly, translating into less time wasted and lower frustration for the assembler. Such labor savings can outweigh a specialty fastener’s cost.

For this rocker arm example, the first concern does not apply as Misumi 3 Series is tolerant of generic M3 nuts. Item number two — reduced fastener torque limit — is acceptable as long as it is still sufficient for what we need on a 3D printed plastic project. And item three — assembly convenience — is something we can get back with some clever 3D printing.

We now apply 3D printing’s strength (a factory for low volume, task specific objects) to generic fasteners in aluminum extrusion beams. Our technique employs a small tool designed specifically for the job. For starters, this tool has a little hump to act as a spring that helps hold its position in the slot. Then, because the tool is designed alongside the part it will be used with, we can design it with trays to hold generic nuts spaced exactly at the distance we need. And as an extra icing on the cake, we add a little hook to the end. This hook — designed to be exposed when hub is in place on the arm — allow us to fine-tune our position without having to take things apart. 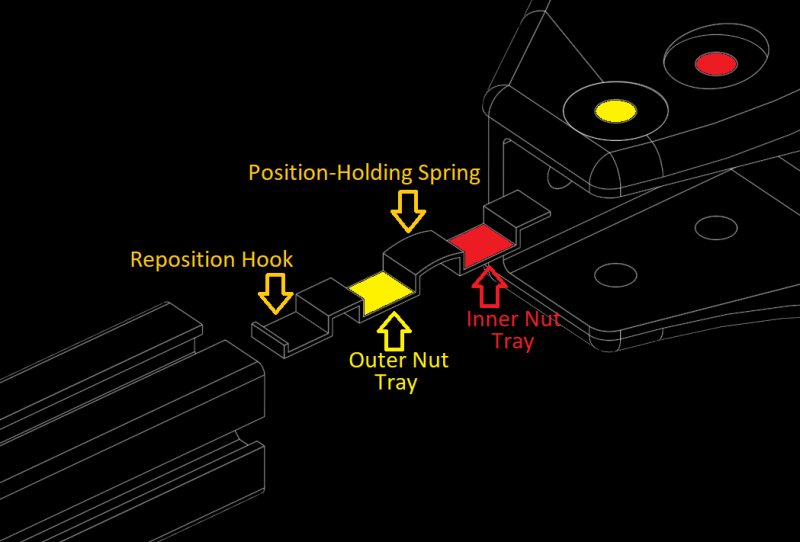 To fit within the narrow spaces left in the slot, the tool is printed as thin as possible: the width of our 3D printer’s nozzle. This also makes economical use of filament and it’s very fast to print, both attributes useful for a disposable item since this thin positioning tool can’t be removed once the bolts are tightened down. It is well worth the sacrifice, though, because it turns a frustrating exercise of aligning small fasteners into a trivially simple task.

Give this fastener method a try. I hope you find the technique useful and I look forward to seeing more projects that combine the strengths of 3D printing and aluminum extrusion beams into something that neither could do alone. If you are proud of your result, don’t be shy about letting us know via our tips line or maybe as an entry to our Hackday Prize. Happy building!