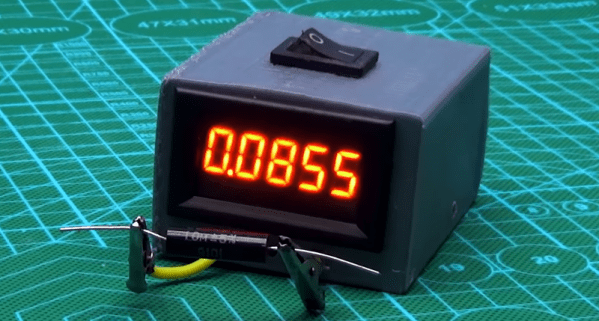 We like to pretend that wires are perfect all the time. For the most part that’s acceptable, but sometimes you really do care about those tiny fractional ohm quantities. Unfortunately though, most meters won’t read very low values. There are tricks you can use to achieve that aim, such as measuring low currents through a device with a known voltage applied. It is handier though to have an instrument to make the reading directly, and [Kasyan TV] did just that with a surprisingly low part count.

The whole thing is built from an LM317, a resistor, and a voltmeter module, that’s it. [Kasyan] mentions the meter’s accuracy means the lower digits are not meaningful, but it looks to us as though there are other sources of error — for example, there’s no way to zero out the probe’s resistance except during the initial calibration. END_OF_DOCUMENT_TOKEN_TO_BE_REPLACED 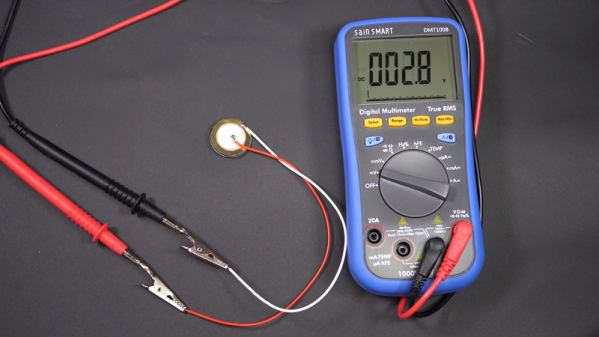 Summer in the Northern hemisphere means outdoor cooking. Matches are old school, and you are more likely to use a piezoelectric lighter to start your grill. [Steve Mould] has one, but he didn’t understand the physics behind why it works, so he decided to do the research and share it in a video.

The first two minutes is a recap of things you already know. But after that [Steve] gets into the crystal lattice structure of quartz. Using some computer animations and some peanut butter lids he shows you exactly why compressing the crystal generates electricity.

END_OF_DOCUMENT_TOKEN_TO_BE_REPLACED 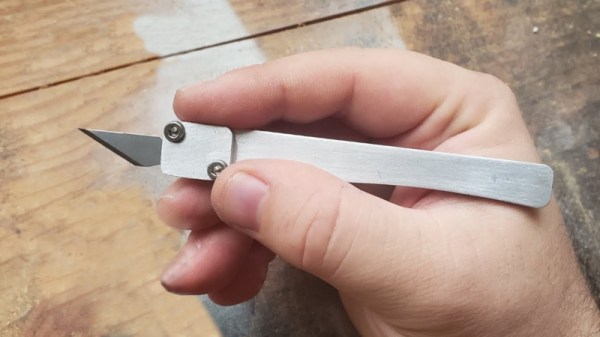 X-acto knives are popular as the scalpel of the craft world. Obviously, holders for the blades are available off-the-shelf, but you needn’t settle for store bought. [Ariel Yahni] set about making an X-acto handle of their own, and it shows just how quick and easy making your own tools can be.

The blades are first measured to determine the appropriate dimensions for the holder. With this done, the basic shape of the handle is drawn up in CAD software using simple primitive shapes and lines. Then it’s just a simple matter of jigging up a piece of aluminium stock in the CNC machine, and letting it do its thing.

The final result needs minimal finishing – primarily just an inspection of the parts, minor deburring and the drilling and tapping of the mount holes. With a couple of socket head cap screws and an X-acto blade installed, it’s ready for work.

We see a lot of interesting tool builds around these parts. You might consider making your own ultrasonic cutter if you’re regularly finishing 3D printed parts. Video after the break. END_OF_DOCUMENT_TOKEN_TO_BE_REPLACED 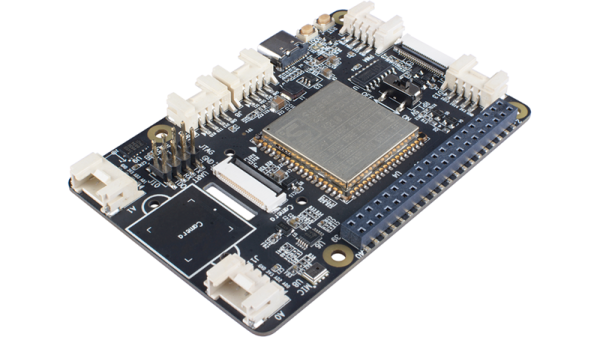 Over the last few years the open-source RISC-V microprocessor has moved from existing only on FPGAs into real silicon, and right now you can buy a RISC-V microcontroller with all the bells and whistles you would ever want. There’s an interesting chip from China called the Sipeed M1 that features a dual-core RISC-V core running at 600MHz, a bunch of I/Os, and because it’s 2019, a neural network processor. We’ve seen this chip before, but now Seeed Studios is selling it as a Raspberry Pi Hat. Is it an add-on board for a Pi, or is it its own standalone thing? Who knows.

The Grove AI Hat for Edge Computing, as this board is called, is built around the Sipeed MAix M1 AI Module with a Kendryte K210 processor. This is a dual-core 64-bit RISC-V chip and it is obviously the star of the show here. In addition to this chip you’ve also got a few Grove headers for digital I/O, I2C, PWM, and a UART. There’s a a USB Type C for power (finally we’re getting away from USB micro power plugs), and of course a 40-pin Raspberry Pi-style header.

This board is essentially a breakout board for the Sipeed M1 chip, which is one of the most interesting new microcontrollers we’ve seen since it launched late last year. There’s a lot of power here, and already people are emulating the Nintendo Entertainment System on this chip with great success. The problem with this chip is that apart from making your own breakout board, there aren’t many options to get it up and running quickly. This is the solution to that; at the very least it’s a Sipeed chip on a board with a power supply, and it’s also a co-processor that can be accessed with Linux and a Raspberry Pi. 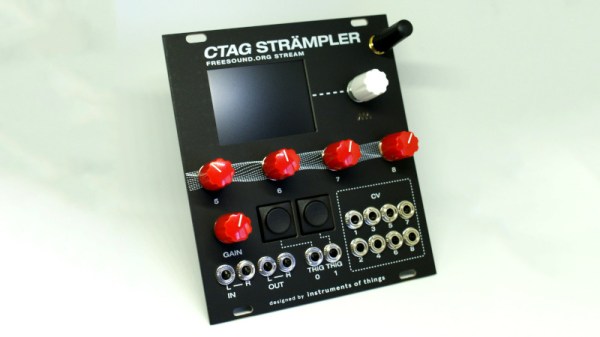 The ESP32 is well known for both its wireless communication abilities, as well as the serious amount of processing power it possesses for a microcontroller platform. [Robert Manzke] has leveraged the hardware to produce a Eurorack audio synthesis platform with some serious capabilities.

Starting out as a benchmarking project, [Robert] combined the ESP32 with an WM8731 CODEC chip to handle audio, and an MCP3208 analog-to-digital converter. This gives the platform stereo audio, and the ability to handle eight control-voltage inputs.

The resulting hardware came together into what [Robert] calls the CTAG Strämpler. It’s a sampling-based synthesizer, with a wide feature set for some serious sonic fun. On top of all the usual bells and whistles, it features the ability to connect to the freesound.org database over the Internet, thanks to the ESP’s WiFi connection. This means that new samples can be pulled directly into the synth through its LCD screen interface.

With the amount of power and peripherals packed into the ESP32, it was only a matter of time before we saw it used in some truly impressive audio projects. It’s got the grunt to do some pretty impressive gaming, too. Video after the break.

END_OF_DOCUMENT_TOKEN_TO_BE_REPLACED 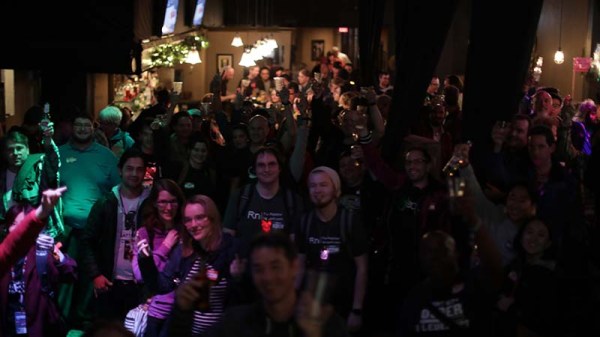 END_OF_DOCUMENT_TOKEN_TO_BE_REPLACED

Join editors Elliot Williams and Mike Szczys as they unpack all the great hacks we’ve seen this week. On this episode we’re talking about laser Internet delivered from space, unwrapping the complexity of Charlieplexed circuits, and decapping ICs both to learn more about them and to do it safely at home. We have some fun with backyard siege weapons (for learning about physics, we swear!), gambling on FPGAs, and a line-scanning camera that’s making selfies fun again. And nobody thought manufacturing electroluminescent displays was easy, but who knew it was this hard?