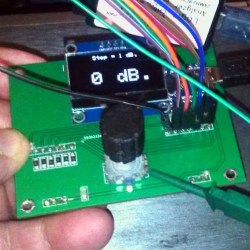 In the RF world, attenuators are a useful test and measurement tool. Variable units that can apply different levels of attenuation in discrete steps are even better. [DuWayne] made a 63 dB step attenuator by putting two smaller units in series, with an Arduino Nano in control of them. With a 3D printed enclosure and OLED for feedback, the device is easily adjusted with a single rotary encoder. There was even room to add a micro USB plug for recharging the power supply.

The two smaller digital attenuators [DuWayne] used are essentially breakout boards for the PE4302 digital RF attenuator, and cheaply available from the usual overseas sources. They are capable of up to 31.5 dB of attenuation in 0.5 dB steps, and by using two in series (and controlling them in parallel) [DuWayne] gets a range of up to 63 dB. The design files can be downloaded from a Dropbox share for the project, should you wish to try any of it for yourself.

Are you interested in RF and maybe software defined radio (SDR)? We’ve covered all the stuff you’ll need to get started with an inexpensive RTL-SDR, and sooner or later you may find yourself in need of [Dan Maloney]’s info on cheap and effective dummy loads.

4 thoughts on “A DIY Step Attenuator, By Gluing Together Two Smaller Ones”