The power grid is a complicated beast, regardless of where you live. Power plants have to send energy to all of their clients at a constant frequency and voltage (regardless of the demand at any one time), and to do that they need a wide array of equipment. From transformers and voltage regulators to line reactors and capacitors, breakers and fuses, and solid-state and specialized mechanical relays, almost every branch of engineering can be found in the power grid. Of course, we shouldn’t leave out the most obvious part of the grid: the wires that actually form the grid itself.

The Difference Between Transmission Lines and Distribution Lines

There are typically two types of power lines that make up the grid, which can be divided based on their function. One group consists of smaller, lower-voltage lines (under 30 kV in most situations) which deliver power to homes and businesses. These are known as distribution lines, and can be buried underground in newer neighborhoods or are strung on smaller poles around 40 feet in height. The number of energy-carrying wires on them is three or fewer (per circuit, some distribution poles carry more than one three-phase circuit) and they tend to hold other equipment on them as well, such as transformers, fuses, switches, and even telephone and cable lines.

The other side of this division are the much larger, higher-voltage lines known as transmission lines. These can be easily distinguished from distribution by their larger size, but there are a few other indicators that you are looking at a transmission line rather than a distribution line. Transmission lines are always built with sets of three conductors with an optional small wire or two at the top of the structure to serve as lightning protection. While a typical residential service may only include a single phase, the electric grid itself is a three-phase system and the transmission lines are meticulously balanced so that an equal amount of current flows on each of the three phases.

Part of the reason for this relative simplicity of the transmission lines is that their only purpose is to connect electrical substations with other substations and provide bulk power transportation. Each conventional power plant has at least one substation with specialized transformers called generator step-ups (GSU). From there the power flows out to other substations which can either step the voltage up even further for long-distance transmission, or step the voltage down for distribution to homes and businesses. At the plant, however, electricity is generated at low voltage (on the order of 10 kV) and is sent through the GSUs in order to increase the voltage. For a given amount of energy, a higher voltage will lower the current, which reduces the amount of current in the wires, reduces the amount of heat the wires generate, and reduces the amount of resistive losses.

This is where the voltages start to get a little bit out of hand. If you’ve noticed, so far I’ve referred to 10 kV as “low voltage” and 30 kV as “lower voltage”, each of which are well out of the reach of most engineers or hobbyists to handle safely. In any other world, these would be considered extremely high voltage. For the transmission lines, though, which handle bulk power, the voltages can be as high as 500 kV and still carry thousands of amps of current. This is necessary for moving power from a 4 gigawatt-capable nuclear plant, for example, tens or hundreds of miles to a population center. To get all that power moving around without causing major problems takes some special equipment, though. 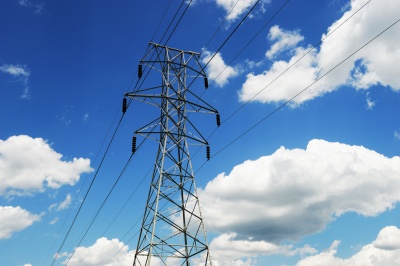 Working from the bottom up, the first piece of equipment is the pole or tower that the circuits will be attached to. These can be from 50 to 100 feet tall or more (the world’s tallest is over 1200 feet tall in China) and as a result of that increased height can get expensive to produce. From a value perspective, it makes sense to balance strength of the structures with the total number of structures themselves. This economical approach tends to result in towers that can be spaced an eighth of a mile or less apart for circuits on the lower end of the voltage scale, 60-200 kV, and as much as a quarter mile apart for the higher voltage circuits like the 500 kV lines. Supporting a quarter mile of steel wire isn’t easy either, especially not if the circuit makes a turn, or if it traverses mountains or other obstacles.

To get the required amount of strength, some transmission lines are constructed on lattice towers. This is probably the most commonly used structure for routing transmission lines across the landscape, as it is relatively cheap to build them and they can be easily designed for varying heights and strengths as the situations demand. They can also be assembled at the final location, which makes it easy to get these structures to difficult-to-reach locations like isolated mountain valleys or sparsely populated deserts. There are some downsides, however. Lattice towers aren’t the strongest available structure in some situations, have a wide footprint which typically can’t be adapted for urban environments, and steel can be a very poor material choice in some situations, especially in coastal areas with salt spray or swampy areas with high humidity.

To compensate for the weaknesses of lattice towers, other structures are available. A popular choice when strength is a priority are poles made out of concrete and pre-tensioned steel rebar. Concrete poles have superior performance in hurricane-prone areas (and are surprisingly bendy), have less of a footprint than a lattice tower of similar height, and can be easier to install. The downside is that they are typically more expensive and must be built with specialized equipment and then trucked to the site whole. Steel poles can also be produced with similar performance characteristics of concrete, and some are even built out of a special alloy called weathering steel (sometimes referred to as corten steel, a trade name), which forms a protective rust layer only on the surface of the pole, protecting the structural steel underneath. Another advantage of steel is that it can be easier to produce structures with more than one pole (supporting the wires via a crossarm of some sort) for the largest of transmission lines.

Attached to the towers themselves are the wires, but in order to prevent massive and immediate faults the wires much be attached to the towers with an insulator. At these voltages, though, just a simple piece of glass or plastic won’t cut it, since the air itself will become ionized and form a path to ground for the electricity to flow. Specialized insulators are needed which can withstand the tremendous amount of electrical pressure placed on them. Before the modern polymer industry, long chains of glass “bells” were strung together and attached to the tower. These insulators were heavy, expensive, fragile, and required some time to assemble in the field. Now there are more advanced forms of insulators that are typically a single piece of plastic-rubber polymer that are both strong enough to withstand the electrical forces themselves, not to mention the extreme weight and tension of the power lines, and long enough to prevent the air around them from ionizing a complete electrical path to the tower. In fact, it is often possible to make a relatively accurate estimate on the voltage of the line based on the length of the insulators.

As one can imagine, the logistics of stringing the actual wires hundreds of miles on spans up to a quarter mile long can get a little interesting.

The tensile strength of most good and/or cost-effective conductors aren’t usually up to this task, so some interesting solutions were found to keep the costs and resistive losses down without stretching wires to their breaking point. Steel has no problem meeting these demands, but compared to other metals like aluminum or copper, steel is not a very efficient conductor. To get more out of the wires, some are built with a stranded steel core, which is then wrapped with outer layers of aluminum to improve its conductive ability. An interesting feature of alternating current is that the current tends to travel on the outside surface of the conductor rather than uniformly through the whole wire, which means that wires of mixed metals can get all of the strength of steel with almost all of the conductivity of solid aluminum.

Of course, different transmission lines will have different thicknesses based on the amount of current flowing through the lines. One major design consideration for these lines is how much they will “sag” under heavy load since the more current they carry the more they will heat up and expand, and the closer the wire will get to the ground. In some situations, overloading transmission lines has caused them to sag from the heat so much that they were able to fault to trees or other things in the transmission right-of-way and cause massive blackouts.

Thicker wires will heat up less for a given amount of current, increasing the carrying capacity of the circuit. One solution to increasing the effective thickness of a conductor is to “bundle” several conductors a few inches apart from one another, allowing for a larger increase in current for less cost than a conductor that is simply double the size.

There are a few notable exceptions to the generic overview of transmission lines presented here. First of all, not all transmission lines are attached to towers or poles. Some are buried underground, although the cost of the specialized insulated conductors is orders of magnitude more expensive than overhead construction and therefore are only installed in places with extreme needs, like urban areas, under rivers or channels, or any place where it is cost prohibitive to build structures. Due to issues with the behavior of alternating current, it is almost impossible to construct a line longer than about 40 miles as well, leading to more design limitations with these types of circuits.

A second irregularity of transmission lines is high-voltage direct current circuits (HVDC). Due to the high cost of converting from AC to DC and back again, these lines are only constructed when power needs to be delivered extreme distances. DC lines do not come in sets of three conductors, but rather in sets of two. They are also immune from the charging losses that plague AC transmission lines, which allow for underground circuits of longer distances to be constructed as well.

Barriers to Improving the State of the Art

Moving into the future, it’s hard to say how much more modern the power grid can get since the underlying principles are so simple: three phases per circuit and structures large enough to keep them from sagging into something that could cause a fault. There is a lot of talk of the smart grid, but the solution to most of the issues with the power system is often simply to build more circuits as the demand for electricity rises. It’s a difficult problem to engineer ourselves out of, especially with the increasing age of the power grid itself, and at some point is simply becomes a numbers game of how many watts can be moved from place to place.

120 thoughts on “A Field Guide To Transmission Lines”