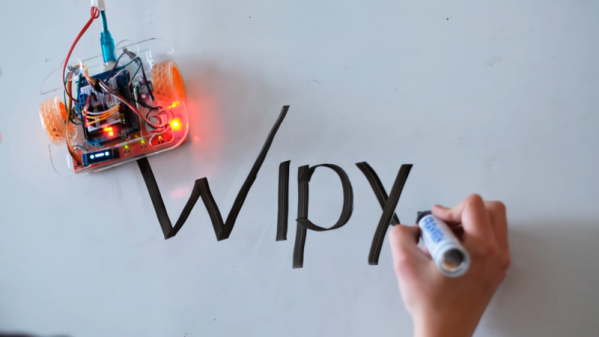 Wiping a whiteboard can be a tedious chore. Nobody wants to stick around after a long meeting to clean up, and sensitive information is often left broadcast out in the open. Never fear, though – this robot is here to help.

Wipy, as the little device is known, is a robotic cleaner that scoots around to keep whiteboards clear and ready for work. With brains courtesy of an Arduino Uno, it uses an IR line-following sensor to target areas to wipe, rather then wasting time wiping areas that are already clean. It’s also fitted with a time-of-flight sensor for ranging, allowing it to avoid obstacles, or busy humans that are writing on the board.

If Wipy lacks anything, it’s probably discretion. Despite its cute emoji-like face, it’s not really capable of tact, or knowing when it’s not needed. It’s recommended to keep Wipy powered down until you’re completely finished, lest it barge in and start wiping off important calculations before you’re done.

Fundamentally, it’s a fun build, and a great way to learn how to use a variety of sensors. If you’ve done something similar, be sure to let us know on the tips line. Else, consider automating the writing side of things, too. Tongue-in-cheek infomercial after the break.