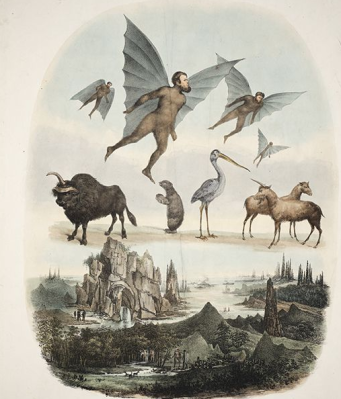 The first of the six articles touted that Sir John Herschel had made amazing discoveries at the Cape of Good Hope and that the articles originally appeared as a supplement to the Edinburgh Journal of Science. If you want to read the original, you can find the text at the Museum of Hoaxes. However, here’s a short summary: Supposedly, Herschel had created a huge telescope using a new principle, shipped it to South Africa, and had visualized many amazing things with it.

In the story, the new telescope was supposed to be a large tubeless reflector, although later they talk about a giant lens. The image formed was further magnified by a water drop microscope. We think. Keep in mind, the thing didn’t really exist, and the text is hard to parse so some of it could be Star Trek-style technobabble. We especially liked “hydro-oxygen microscope.” We were also amused that when Herschel and David Brewer came up with the idea, Brewer reportedly said — we aren’t making this up — “Thou art the man!” We guess things haven’t changed so much over the last 200 years.

The final instrument was said to have a 24-foot diameter, weigh almost 7 tons, and could magnify up to 42,000 times. Supposedly, the new telescope had found planets around other stars and could see objects on the moon as clearly as you’d see something with your own eyes one hundred yards away. And what did he supposedly see? At first, there were reports of red flowers. There were also a number of types of lunar trees that eventually gave way to a lake.

Like all good stories, there was a slow reveal. They found slender pyramids — surely the sign of intelligent life. Then they observed animals of various types. There was something like bison and one animal described as a “monster” resembling a goat. 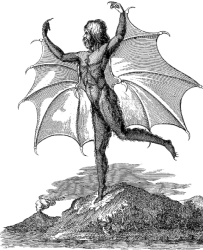 By the fourth installment, the scientists observed winged humanoids that appeared to engage in conversations complete with gestures. They named these winged people Vespertilio-homo (bat man — no kidding). They also claimed to find an abandoned temple made of sapphire. Near the temple lived a higher form of the bat people.

The downside to the giant lens was that the sun caused it to start burning down the building. The telescope was saved, though, and Herschel started looking elsewhere during the new moon. He found the rings of Saturn were from volcanic smoke. The paper supposedly omitted some other details as not interesting to the general reader.

The story spread, first across the country, and then throughout Europe. It took about a month for the New York Herald — a competitor of The Sun that had temporarily shut down due to fire — to call out the story as a hoax.

It is often claimed that the Sun’s circulation went up because of the hoax, but that may not be true. It is true, though, that they turned a great profit from the sales of a pamphlet with the story and lithographs. There is evidence that the paper sold 60,000 pamphlets in a single month. Today only sixteen of them are known to exist and they sell for a lot more than the original penny.

On the Hoax Museum site, they break down that about half the New York newspapers (other than The Sun) seemed to buy into the hoax, although half of those were skeptical about it. Perhaps the biggest tell was that the Edinburgh Journal of Science had not even existed for several years at the time of printing, having merged with another journal in 1833. The people who did realize it didn’t have a great way to tell everyone else, either, so it was largely ignored.

Herschel was at first amused by the attention. He really had been in South Africa at the time of the hoax. However, he later grew tired of people asking about his moon discoveries. But the story gets even stranger. Edgar Allen Poe, who had been a colleague of Locke, claimed the piece was plagiarized from his own work, “The Unparalleled Adventures of One Hans Pfaall,” which had appeared under a different title two months earlier in a literary magazine. Both because of the nature of the publication and the obvious satire, few if any people believed Poe’s account of a man flying a balloon to the moon and living there for five years.

In later years Locke did admit to writing the hoax, although he may not have worked alone. In addition to trying to sell more papers, there is some thought that he may have been poking fun at contemporary science reporting. For example, Thomas Dick wrote a popular book where he computed that the solar system had nearly 22 trillion inhabitants and the moon was home to over 4 billion. You might wonder how he arrived at such a number. Dick was a church minister and assumed that God would will that all his creation would be inhabited. That included asteroids, planetary rings, and moons. Computing the surface area of all those things and knowing the average population density in England led to his claim.

You usually think of the War of the Worlds hoax as an early mass media manipulations. That was almost 100 years after the Great Moon Hoax. But the technology of the relevant era drove both the hoaxes. In 1938, radio was a new medium and was in many people’s homes. In the 1830s the steam-powered printing press made it possible for The Sun to produce many copies of the paper cheaply and so the paper had a large readership ready to belive the story.

The Sun was the first successful penny paper — more affordable than the six-cent papers. With large cities, low prices, and steam-powered printing presses, the penny papers were the radio or TV of their time. They also tended to cater to more humble readers with crime reports, sensational stories like the moon hoax, and advertisements for things you wouldn’t see in the six-penny papers.

Where Will the Next Hoax Occur? 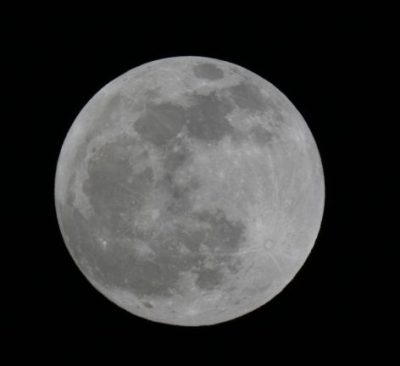 We would like to think that our technologically savvy population would laugh at something like the Great Moon Hoax today. Common knowledge and common sense have come an unfathomable distance since the 1830s. Now, most people would discount these claims at face value, and there’s a huge community of astronomers (both professional and hobbyist) around the world who would refute such claims.

It seems to us that while most of the world is worried about the rich getting very rich while the poor get very poor, we also worry about the divide between people who have basic science knowledge and critical thinking skills versus those who don’t. That divide seems to be getting bigger and in a world increasingly dependent on science and technology, that strikes us as dangerous. One thing we think helps is to normalize a deep interest not just in the results of science and technology, but in the fascinating details of each new discovery.