Where Did The Floppy Come From? 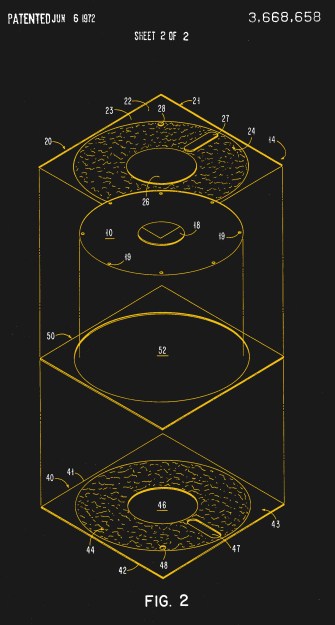 Computers of the 1950s and 1960s had typically been room-sized machines, and even though by the end of the ’60s a typical minicomputer had shrunk to the size of a cabinet it would still have retained some of the attributes of its larger brethren. Removable storage media were paper tapes and cards, or bulky magnetic disk packs and reels of tape.

The impending arrival of the desktop computer at the dawn of the 1970s demanded not only a higher capacity but also more convenience in the storage media for these new machines. It was IBM who would provide the necessary technology in the form of an 8-inch disk that they had developed for loading microcode onto their System/370 mainframes. Their patent for a single-sided disc with a capacity of 80kB had been filed in December 1969, and was granted in June 1972. 8-inch disk drives were produced by IBM and other manufacturers in a variety of formats with increasing capacities over the 1970s, and became a common sight attached to both minicomputers and desktop machines in that decade. Many consumers would have had their first glimpse of a floppy disk in this period courtesy of an 8-inch drive on a CP/M machine in their workplace, and they became for a while symbolic of a high-tech future.

The basic design of a flexible magnetic disk in a plastic wallet with a fabric liner was soon miniaturised, with the company formed by former IBM staffer Alan Shugart producing the 5.25″ format in 1976. This was visibly a shrunken 8″ disk, but its increased portability and convenience led to its rapid adoption. When IBM’s PC made its debut in 1981 it was the obvious choice, achieving mass-market ubiquity until it was slowly displaced by Sony’s 1981 launch of the 3.5″ hard-cased format.

…And Where Did It Go?

It is an inevitability that any dominant technology will in due course be usurped, but why did the floppy fade away so quickly over the end of the 1990s? Was it the thirst for extra capacity that couldn’t be satisfied by expanded density drives or by expensive new formats such as Iomega’s Zip drive? Or was it simply superseded by a better technology such as the CD-ROM or the USB Flash drive? It’s more likely that both of these and more contributed to the format’s decline in popularity.

There was a time when a boot floppy was an essential tool in the armory of anybody working with computers, but as the CD and USB drive took over that function we said good riddance and no longer had to pray our boot floppies hadn’t lost a sector. The arrival of much more convenient free cloud services with significant storage — the launch of Gmail in 2004 comes to mind — sounded the death-knell for the floppy. If you bought a computer with a floppy drive installed after about 2005 you were in a minority, and in 2019 they retain a tenuous existence as an external peripheral with a USB interface. Perhaps most tellingly, an Amazon search reveals boxes of ten floppies selling for around $15, what was once a commodity item has crossed into being an expensive oddity.

The floppy drive has left us, but what legacies do we retain from it? Perhaps the most obvious is in every desktop computer, the size of the floppy drive standardized the size of the drive bay, which in turn dictated the size of other devices designed to be put into drive bays. And of course we’ll always have the glamorization of the floppy in movies from the era, like the corny-is-cool scene with a 3.5″ in 1999’s Office Space or the use of an 8″ in 1983’s War Games.

We’ll leave you with a video, showing an automated production line for 3.5″ floppy disks. We see all the constituent parts including tiny pieces such as the write-protect slider and the head shutter spring, coming together on a beautiful piece of production line automation. A surprise is that the shell is assembled before the disk itself is slipped in from one end. If you still use floppies for something other than retrocomputing, we’d love to hear from you in the comments.

Thanks [Foone] for the idea.

105 thoughts on “Retrotechtacular: The Floppy Disk Orphaned By Linux”