You’ve designed PCBs. You’ve cut, drilled, Dremeled, and blow-torched various objects into project enclosurehood. You’ve dreamed up some object in three dimensions and marveled as the machine stacked up strings of hot plastic, making that object come to life one line of g-code at a time. But have you ever felt the near-limitless freedom of designing in fabric?

I don’t have to tell you how satisfying it is to make something with your hands, especially something that will get a lot of use. When it comes to that sweet cross between satisfaction and utility, fabric is as rewarding as any other medium. You might think that designing in fabric is difficult, but let’s just say that it is not intuitive. Fabric is just like anything else — mysterious until you start learning about it. The ability to design and implement in fabric won’t solve all your problems, but it sure is a useful tool for the box.

To prove it, I’m going to take you through the process of designing something in fabric. More specifically, a tool roll. These two words may conjure images of worn, oily leather or canvas, rolled out under the open hood of a car. But the tool roll is a broad, useful concept that easily and efficiently bundles up anything from socket wrenches to BBQ utensils and from soldering irons to knitting needles. Tool rolls are the best in flexible, space-saving storage — especially when custom-designed for your need.

In this case, the tools will be pens, notebooks, and index cards. You know, writer stuff. But the same can just as easily organize your oscilloscope probes. It’s usefully and a great first foray into building things with fabric if this is your first time.

Pin Down Your Ideas

When I sat down to design and make this tool roll, I already had an idea of where it would be used and what would be going in it. No matter what ends up in your tool roll, some things are universal. They all store tools in some way or another — usually with pockets and/or elastic bands to hold things in place — they roll or fold up for convenient transport, and snap, buck, or tie closed. Beyond that, the sky’s the limit. Mine has a pocket, for instance.

“The whole thing is pockets,” you might say. Technically, the whole thing is custom tool sleeves. I’m talking about a catchall pocket for the amorphous stuff of life, like notes, receipts, or free envelopes of Fun Dip sitting out on the table at work.

First and foremost, it’s my tool roll and no one else’s. Keep this mantra in mind when designing yours, and you’ll have yourself a useful, beautiful thing.

Tally Up Your Tools

Alright, so what are your tools? You don’t have to know exactly what will be going in there at this stage. A general idea is great. Once you have a grip on the tool list, consider the environment it will be used in. Mine is going to spend all of its time either rolled up in my purse, or open flat on a desk. The biggest threat it will face is a bit of spilled coffee and the occasional crumb.

This is a good time to start thinking about fabric choices. If I made this tool roll out of thin cotton or some kind of knit fabric like t-shirt material, it wouldn’t last nearly as long. If I made it out of leather, it might last a lifetime.

I chose a ‘middle ground’ fabric because the things I’m going to fill it with — pens, small notebooks, and index cards — are all fairly lightweight. Nothing will be dirty, oily, or particularly sharp.

A mechanic’s tool roll is probably going to get dirtier than a roll full of knitting needles, although a guerilla knitter who lives to yarn-bomb public structures might object to that. Both the mechanic’s and the knitter’s tool rolls are likely to have sharp objects, so lining the pocket area with leather will make it last a long time. 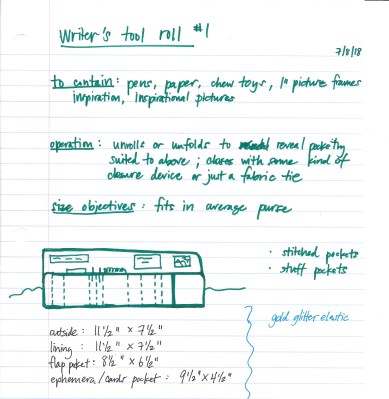 You Can’t Spitball Without Paper

I like to start designing with pen and paper. First, I describe the thing as best as I can. I think, I draw pictures, I ask questions. This is the first chance to really turn the project over in your mind and avoid costly mistakes. Paper is cheap. Most quality fabric is not.

Don’t sleep on drawing pictures! This is not the time to lament your lack of artistry. Use something like PowerPoint if you need crisp shapes. Thinking with pictures helps tremendously. You probably already knew that.

Prototyping Gets You What You Want with Fewer Do-Overs 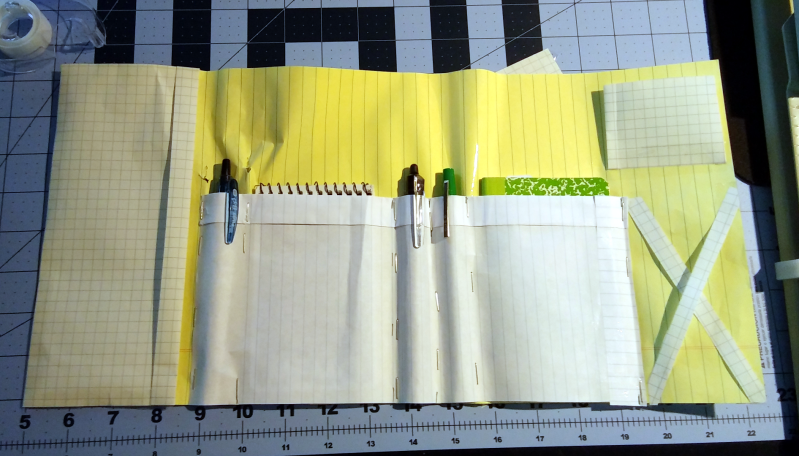 If at all possible, I make a prototype out of notebook paper or cardboard from the recycling bin, tape, and a long-arm stapler. It’s a fast, cheap way to get the project off of the page and into reality.

This is a good time to start pruning back the features. By the time I made the paper prototype, I had way fewer tool pockets, and I’d killed off the idea of clear window pockets for pictures.

Since all my writer tools are pretty lightweight, I can actually use the prototype for a day or so to really nail down the details. Doing this made me realize that I wouldn’t actually use the earbuds pocket, and I concluded that the elastic X wasn’t going to work out. There’s no substitute for experience.

Even so, paper prototypes have their limits. It wouldn’t work at all for something that needs to drape over curves, like an article of clothing or a car cover. People who make clothes will often “make a muslin“, which means sewing up a full prototype from an inexpensive cotton fabric called muslin. This first draft is useful for adjusting fit, and that’s easier to do because there’s no color or print to distract from the lines underneath.

If you can spare the time, sleep on your design and look it over again in the daylight. Iterating in fabric can be time-consuming and expensive, so this is the time to make sure you know what you’re after and the steps it will take to achieve it. 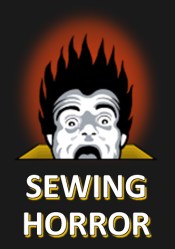 Don’t forget to think in 3D. No matter what your tool roll looks like or what fabric you end up with, one thing you must do is account for the girth of each tool when planning the size of the piece that becomes the tool sleeves. Sure, you could sew them all down flat. But as soon as you put tools in, the back will pucker up. Put a few more in and it won’t be flat anymore.

Fabric 3D is a different animal, because you really have to think about what will be on the inside vs. the outside as you put the pieces together. Most seams are sewn with the right sides of the fabric facing each other, and then the seam is either opened flat or turned right side out.

Don’t forget the seam allowance. The number one rookie mistake in any kind of sewing is forgetting the seam allowance when cutting out fabric for a project. Seam allowance is fabric that will be lost in the joining of the pieces. It’s measured as the distance between the edges of the fabric pieces and the line of stitching used to join them. Some patterns include the seam allowance in the pieces already, and some don’t, and any pattern maker worth their marking chalk will tell you whether it does or doesn’t.

Quarter-inch seams are pretty standard, although 5/8″ is widely used in apparel making. Decide your seam allowance in advance, and keep it consistent. It’s disappointing to make this mistake with cheap fabric, and devastating to screw up fabric that’s $60 a yard.

Prepare yourself to spend a decent chunk of time at the fabric store. If you want help choosing fabrics and you aren’t quite sure how much you need, avoid going on the weekends, or get there when they open. The cutting counter workers love talking about projects and helping out, but weekend afternoons get extremely busy all year long. Bring your plans!

If you don’t want to spend a lot, wait in line, or just want practice material, look for the remnants bin. These are pieces of fabric that are a yard (36″) or less, and they will usually be super cheap. Or better yet, go to a thrift store! Most of them have a section for material. Even if they don’t, they’ll have some bed sheets. That’s a lot of fabric to play around with for a pretty low price.

If you’ve ever bought a tool roll, it was probably made out of canvas or leather. A word of warning if you go that route: make sure your thread injector can handle heavy fabrics, and that you have the appropriate needle. Layers of canvas and leather add up quickly.

I made my writer’s tool roll out of home decor chenille, a soft but sturdy fabric that might have otherwise covered a throw pillow or a low-use chair. It feels a lot like corduroy without a wale. The ties that keep it closed are made from some chambray cotton I already had. Chambray is typically used for button-down work shirts and summer apparel. 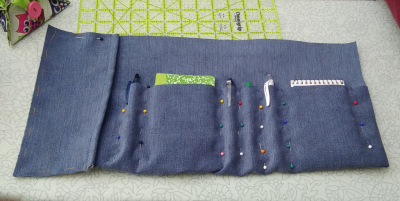 Putting it all together is easy, but there are a few things to keep in mind.

When you sew up the tool pockets, don’t just remember the girth factor. Use it! Working from one side to the other, insert each tool the way you want it and pin around it. Don’t take a tool out until it’s time to sew its pocket. Protip: don’t ever let fabric you’re sewing hang off the table. Gravity plus the weight of the fabric will screw up your seam, especially if there’s a bunch of tools in there. Use your head: if your tools are really heavy, take them out after pinning around them.

You will want to backstitch heavily at the top of each pocket, where the tool goes in and out. This is where it will get the most stress. If your machine can do a zig-zag stitch that’s tight enough to pass for a bar tack, go for it. 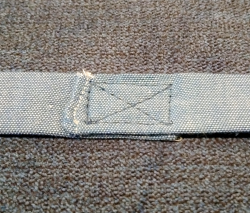 Since the straps live on the outside, they’ll see a lot of wear and tear. Sewing them down in a simple boxed X pattern will secure them without a lot of bulk.

The interesting thing about a tool roll is that you don’t need to buy a pattern. Their function implies almost limitless forms. You just need to know what tools you want to include, and have a good idea of where you’ll be using it.

Self drafting is a bit like designing your own PCB. It’s far more rewarding than following a pattern, because you end up with something special that’s tailored to your exact needs. That kind of complete control can be scary or intimidating. But it doesn’t have to be. Doing some pre-work before you ever cut fabric can make the difference between a useful thing that gives you a sense of pride, and another unfinished object that fills you with shame.

31 thoughts on “Tool Rolls, The Fabric Design Challenge That Can Tidy Up Any Workshop”