Power comes from a 26 0mAh LiPo battery that allows for up to six minutes of flight time; includes a 3-axis gyroscope, accelerometer, and magnetometer; runs on an ESP8266-12S 32-bit MCU; fully charges within 45 minutes through a USB connection; weighs around 35 g; and is about 90 mm from motor to motor. 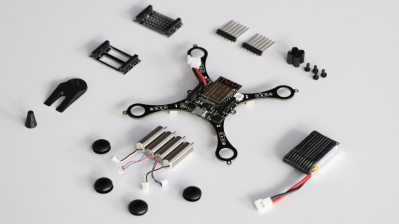 The software includes an ESPcopter library compatible with the Arduino IDE, which includes flight control software to make the drone’s flight stable. There are also examples for how to build a self-contained web server to allow the user to control the drone from a phone, tablet, or laptop. From the control screen of the remote device, users can control the pitch, roll, yaw, and throttle using control joysticks, while also modeling the flight on a route simulation.

Using the SDK, users can implements a median filter, a complementary filter, and PID algorithms, effectively allowing them a full range of possibilities in the functionality of their drone.

The most useful part of the ESPcopter project? There’s already a vibrant community online filled with DIY enthusiasts from around the world talking about spin-off projects ranging from first-person view (FPV) camera setups, programming swarms of drones, and even setting up educational video collaborations.