If you want to do something you’ve never done before, there are two broadly-defined ways of approaching it: either you learn everything you can about it and try to do it right the first time, or you get in there and get your hands dirty, and work out the details along the way. There’s a lot to be said for living life by the seat of your pants. Just ask anyone who found inspiration in the 11th hour of a deadline, simply because they had no other choice.

Ted Yapo didn’t have a lot of high-speed design knowledge when he set out to build an open-source multi-GHz sampling oscilloscope, but he didn’t let that stop him. Fast forward a year or so, and Ted’s ready to build his third prototype armed with all the hands-on practical knowledge he’s gained from building the first two.

At the 2019 Hackaday Superconference, Ted gave a talk about his journey into the high-stakes world of high-speed design. It’s an inspiring talk, and Ted gives a good look into everything he’s learned in trying to build a sampling ‘scope. We think you’ll appreciate not only Ted’s work, but also the ease with which he explains it all.

So why is Ted doing all of this? For one thing, his 1989 Tektronix has been trucking along for 75,000+ hours, and it won’t last forever. The bigger problem is that this is one of the last digital scopes to use equivalent-time sampling, because manufacturers jumped to real-time sampling within a few years. Ted sees the opportunity to duplicate this with modern technology, and we are over here nodding vigorously and setting aside cash for whenever this thing is ready to either buy outright or build. 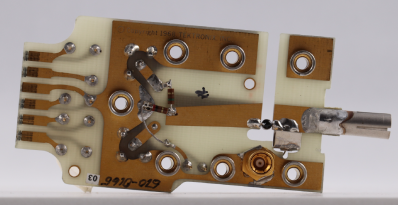 The first scope Ted ever used was a 1968 Tektronix, so that’s where he started his studies. His journey began with that age-old question: how do equivalent-time sampling ‘scopes work, exactly? He found schematics and descriptions for that vintage, and then bought a used one and dismantled it.

What Ted found inside the sampling head seems shockingly simple. There are two Schottky diodes doing the sampling, and they are fed short current pulses by a separate strobing circuit controlled by a step recovery diode.

Ted quickly discovered that the biggest hurdle would be generating these extremely fast pulses. He found that while it’s harder for the hobbyist to get bleeding-edge components that get the speed down to single-digit picosecond range, it’s definitely possible to get to the 20-30 ps range with affordable components. 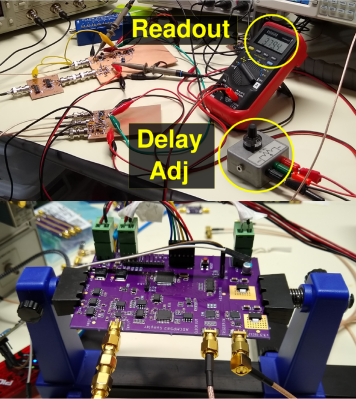 Armed with enough knowledge to be dangerous, Ted built an analog sampler using a six-Schottky diode gate and a couple of 74HC logic chips to generate the strobing pulses. Ted says it took half an hour to take his first sample because the UI is completely manual — he sampled using a potentiometer, read the values off of a voltmeter, and wrote them all down, covering five sheets of paper. But it worked, and he calculated the bandwidth at 141MHz.

For his second prototype, Ted went digital. He explains that this method uses a comparator: it compares two inputs, and tells if one is higher than the other using successive approximation. This is the sampling part. But you also need a time base, and he ended up using a switched gate delay to align the clock edges.

Ted’s second prototype is several orders of magnitude faster than the first. He’s up to 7GHz bandwidth, has the rise time down to 48 picoseconds, and averages 100 gigasamples per second. Amazingly enough, the BOM comes in under $100 including the PCB. Are you salivating yet? 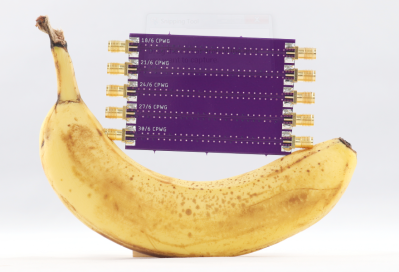 Fast Signals For a Fast ‘Scope

So, what can you do with such a fast scope? One thing Ted wants to do is Time Domain Reflectometry (TDR), which is a lot like radar for transmission lines. By sending a signal down a PCB trace or wire and measuring what comes back, you can determine the characteristic impedance of a circuit or section of a circuit.

Ted talks about a common problem in high-speed circuit designs: calculating the right trace width necessary for a coplanar waveguide. In other words, how wide should the copper squiggle connecting the components be to achieve standard 50Ω impedance? Many calculators have been built to make this easier, but they’re all based firmly in theory that doesn’t account for the realities of uneven impedance across the fiberglass in PCBs. So Ted made a board to test different trace widths. None of them hit 50Ω exactly, but with his handy new 7GHz ‘scope, he was able to easily determine that 22mil traces are optimal given the circumstances.

For the third prototype, Ted is shopping around for a 32-bit CPU and a way to enhance the time base circuitry. Aside from ultra-wideband radar and LIDAR, Ted is looking for interesting use cases, so hit him up on IO or Twitter if you’ve got fast signals that need scoping out.

20 thoughts on “Recreating Fast Oscilloscopes Is A Slow Process”