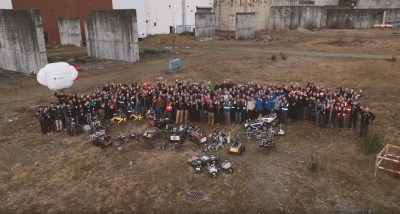 The systems track (actual robots in real world environments) competition took place at an unfinished nuclear power plant in Elma, Washington. Its less-than-pristine concrete and metal environment represented complex urban underground infrastructure. If the facility looks familiar, that may be because it is also occasionally rented by the entertainment industry for filming. This SubT competition was likely the innocent reason why DARPA sent out some ominous-sounding tweets several few months ago. As outlined in that request, the two competition courses challenged robots with navigating irregular shaped areas spanning from claustrophobic tight quarters to spaces the size of auditoriums, spread across multiple floors.

All of this is only dimly lit (if at all) so robots using cameras needed to bring their own bright lights. To solve the challenge of widely varying terrain, many teams sent in groups of different robots and each were deployed for their specialties. For these robots to coordinate, they also had to bring their own networking infrastructure. We see several robots setting down mesh network nodes that can also function as location beacons, just like Hansel and Gretel’s bread crumbs.

Read the IEEE Spectrum story for more stories of last-minute hacks. See the team that chopped chunks out of their robot wheels to help it climb stairs, the team that rushed out and bought a laptop computer to replace a fried robot brain, and the team that put a member on a trans-Pacific flight as overnight courier for critical replacement parts.

For those that rather watch videos, here is DARPAtv’s playlist for Subterranean Challenge.