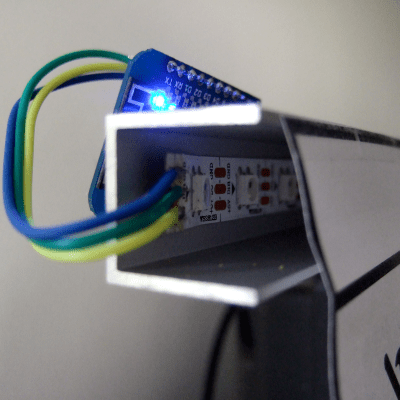 There isn’t much to the Corona clock. An ESP8266, in my case running NodeMCU firmware, connects over WiFi and displays the time on a WS2812 strip, connected on pin 4. In our case, I had a meter-long 60-LED strip, and we needed to cover approximately 15 waking hours, so it’s just a matter of lighting up one LED every 15 minutes. We spent more time coming up with a day-plan and looking for clip art than we did coding or soldering. I tried to think of cool things to do with the colors, but in the end just went with my son’s favorite: blue. (Any good ideas? Feel free to fork it and let me know.)

I mounted the strip to what I had in the basement: a conveniently 1 m aluminum U extrusion. If you’ve got a yardstick, or even a long-enough piece of cardboard, you’re in good shape. The LED strip had a sticky backing, but there’s no small amount of “magic” tape used to keep everything else together and in place. You can probably think up something smarter. On to the clock face! 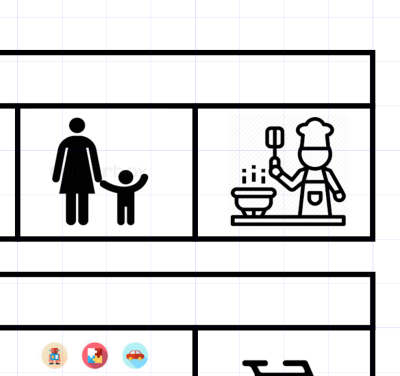 The one trick was printing out the cells for the clock to match the spacing of the LEDs. They’re a maddening 1.66666 cm center-to-center, which means that I had to open up Inkscape to get the art done. But then you’re home-free, because in Document Properties, aside from setting up for landscape printing, you can set up a grid of any size that you want, and even darker lines every four grids, or one hour. Enabling snap-to-grid made all our boxes exactly the right sizes, and I imported and scaled all of the clip-art that my wife found.

If you’re looking for a nice diffused LED look, a 20 mm deep U channel with a paper front as diffuser is probably pretty close to ideal. I ran some rainbow fades up and down the length of it, and they look great. But for an “accurate” clock that doesn’t require color mixing, it’s probably a little blurry. Anyway, it works. Max can tell when it’s the last LED in his blocks of playing-alone time and hasn’t missed one yet. For a kid who can’t yet tell clock time, it’s a pretty neat experience for him to be able to say “Dad, come look at the clock, it’s time to go out with the dog!” and order us around for a change. I’ll get my revenge when kindergarten opens back up again.

It’s funny how small things like this can change what would be a daily conflict — the fight over Max’s schedule, and his feeling that it’s out of his control — into a pleasure. Granted, Max will be happier when he is back to playing with his friends, and we’ll be happier not working nights to make up for the “lost” couple hours of childcare during the day: free time got pushed somewhere off the timeline for the moment. But it’s also been a sincere pleasure to take an hour off to go on a bike ride in the forest with Max. Quality corona time?

Are you quarantining or working from home with kids? Got any cool projects, hacks or not, to help out? Post ’em up in the comments.

19 thoughts on “The Corona Clock”