As a general rule, you probably shouldn’t be getting your Personal Protective Equipment (PPE) from the party store. But these are exceptional times, and rather than potentially depriving medical professionals the equipment they so desperately need on the front lines, the team at [Robots Everywhere] has been looking into improvised PPE. We’re not sure things are at the point where you would need to don this DIY Positive Pressure Suit (PAPR), but it’s certainly an interesting look at what’s possible when you think outside the box. 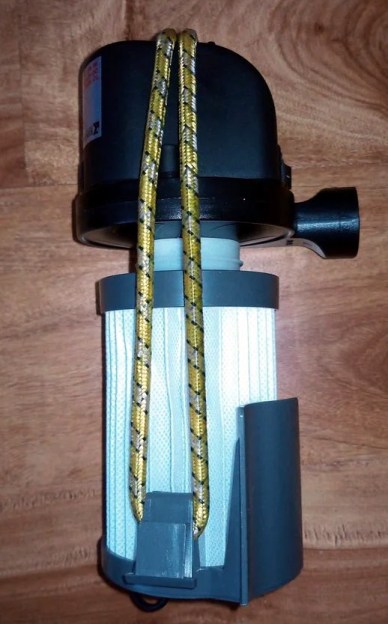 At the most basic level, a PAPR is a mostly air-tight garment that is continuously pumped full of filtered air. As long as the pressure inside the suit is higher than outside, there’s no way airborne bacteria and viruses can get in without traveling through the filter first.

For this project, the folks at [Robots Everywhere] took an inflatable astronaut costume and replaced the dinky original air pump with a much larger 12 V unit designed for inflating air beds. Upgrading the pump not only increased the internal air pressure of the suit, but also made it easier to add a HEPA filter to the inlet. As long as the suit is inflated and there are no leaks in the hose, the wearer will be surrounded by a bubble of filtered air.

Presumably, you don’t want to be tethered to the wall though, so the write-up briefly touches on how the pump system can be made more mobile with the addition of an RC-style battery pack. With the pump and batteries secured in a pouch attached to the suit, the wearer is free to venture outside the confines of their self-isolation bunker and go about their dystopian daily business.

A getup like this might seem a bit excessive, but with so many folks desperate for information on homemade protective gear, we aren’t passing any judgment. The team says you can modify a cheap painter’s suit in much the same way, but frankly, that doesn’t sound nearly as fun to us.

[Thanks to Aron for the tip.]