Personally, I am a fan of the real thing, but dogs aren’t an option for all. Plus, robotic dogs are easier to train and don’t pee on your couch. If you are looking to adopt a robotic companion, Stanford Pupper might be a good place to start. It’s a new open source project from the Stanford Robotics Student group,  a group of robotic hackers from Stanford University. This simple robotic quadruped looks pretty simple to build, but also looks like a great into to four-legged robots.

This is the first version of the design, but it looks pretty complete, built around a carbon fiber and 3D printed frame. The carbon fiber parts have to be cut out on a router, but you can order them pre-cut here, and you might be able to adapt it to easier materials. The Pupper is driven by twelve servos powered from a 5200 mAh 2S LiPo battery and a custom PCB that distributes the power. That means it could run autonomously.

The brains of the Pupper is a Raspberry Pi running some custom code that translates the input from a joystick into movement. The movements Pupper can make include walking, trotting, running, jumping, and a series of dog-like look around moves, all calculated in code with inverse kinematics. There is no option to howl or tilt the head, though, as it doesn’t have a head. 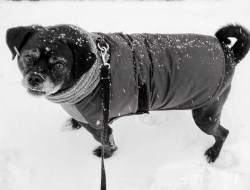 It’s a pretty neat looking design that could be the basis of a rather cool robot dog. The designers estimate that it should cost between $600 and $900 to build, but I can see some potential for cost-saving in there using cheaper servos or other scavenged parts.

And because no post that mentions dogs is complete without a photo, here’s my non-robotic pup Jasper.