The 7-segment display certainly is a popular build, and surprisingly people still come up with new takes on this over a hundred-year-old way to represent numbers. This time [jegatheesan.soundarapandian] is making it big by building a giant 7 feet tall 7-segment display. 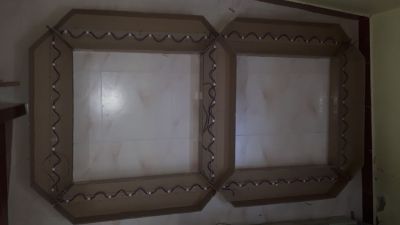 Apparently, the plan is to build a giant clock so he started off by making the first digit. To keep it cheap and simple the segments are made from corrugated cardboard which was carefully cut, folded, and then glued together. The light-diffusing lid is simply made from white paper. He used the ubiquitous WS2812B strips to light up the segments, but things turned out to be more complicated as he was not able to get enough strips to fill up all the segments. This forced him to cut up the strip into individual pieces and space them out by reconnecting the LEDs with wires. Cutting, stripping, and soldering 186 wires took him almost 10 hours. An Arduino Uno serves as the brains of the device and there is a nice Android app to control it via Bluetooth.

We are excited to see the complete clock once it is finished. In the meantime let us remember other epic displays like that made from 144 individual 7-segment displays or the giant LED video wall using 1200 ping pong balls.

13 thoughts on “7-Segment Display Is No Small Feat”