Drag consists of several components, and can quickly become very complex. However, a simplified understanding of the different types of drag is enough to make basic improvements to a vehicle. The most obvious element is the cross-section of an object moving through flow. The general shape of a vehicle has the biggest effect here. A vehicle like a bus, which has a nearly-flat rectangular cross section, will have a lot of form drag. Conversely, slimmer, more streamlined shapes have less. There’s also lift-induced drag to consider, which is drag created by surfaces which generate lift, or in this case, downforce. For this reason, Formula 1 cars and other vehicles that generate a lot of downforce experience this type of drag. There’s also skin-friction drag, generated as air moves along the body of the car. Typically this is not a major concern when exploring vehicle aerodynamics, however it’s worth noting that washing the bugs off your car will generally reduce this component of drag.

It’s also important to remember that aerodynamic forces are proportional to velocity squared. This means that as speed doubles, the aerodynamic forces of downforce and drag are quadrupled.  Aerodynamic modifications to your car have the most effect at high speeds. This means that if your primary motorsport activity is parking lot autocross under 60 MPH, you won’t find much gain from aerodynamics. If instead your main pursuit is high-speed track work with many corners over 150 MPH, you could shave seconds off of your lap times with the right setup.

Thus, improving your vehicle’s aerodynamics is about manipulating the forces of downforce and drag. Application is key here. If you’re looking for ultimate fuel economy, minimizing drag is a must while downforce is unimportant. Conversely, if you’re creating a time-attack car, you’ll need as much downforce as you can get to maintain high cornering speeds. With the lift-induced drag being a necessary trade-off, as you’ll overcome that with sheer horsepower. A salt-flats land speed racer will also aim to reduce drag to a minimum, while likely wishing to maintain just a touch of downforce to keep the wheels on the ground past the 200 MPH mark.

Like any engineering discipline, it’s all about making carefully considered trade-offs to get the best possible performance. For this article, we’re interested on mods to generate more grip, helping keep a track-focused car glued to the tarmac.

More Downforce Please, And Don’t Skimp On The Down

You’re building a track car, aiming to carve the corners and leave your competitors in the dust. You’ve already got sticky tires and top-notch dampers – you now need to make the air work for you. These mods will help you in your quest to cut that lap time to smithereens.

A great way to get the authentic race car look and increase downforce, a big wing on the back of your car is a common aero mod among serious track fiends. Stick-on ducktails can have some minor effects, but for real gains, you’ll want a GT-style wing.

These should come with adjustments, allowing the angle of attack to be changed; thus varying the amount of downforce generated. This is an important aspect of tuning, both to avoid excessive drag, as well as getting the aero balance right. Too much rear downforce can lead to understeer in high-speed corner, as the wing pressing down on the rear reduces traction at the front of the car.

Mounting the wing in the right place is important too, with different set ups better suited to different cars. The wing needs clear airflow, and to be able to transfer the downforce to the body of the car effectively. Attaching the wing securely is a must – if it falls off on track, you’ll be in big trouble.

A front splitter is a common modification, essentially acting in the same way as a rear wing, just on the front. Due to packaging constraints and the need to see out of the front windshield, they tend to look a little different, and are mounted at the bottom of the front bumper.

Front splitters come in a huge range of designs, from mild to wild. They can be as simple as a molded lip that helps guide the airflow smoothly under the front of a car, to a giant carbon fiber wing with adjusters and many layers of strakes and winglets to get the ultimate downforce.

For the street driver, the former is common as both an aero mod and a styling choice. The latter is generally limited to all-out time attack builds, with the average track rat falling somewhere in between. These devices can make a huge difference to front-end grip at speed, as they help press the steering wheels into the road.

A less obvious way to nonetheless have a major effect on a vehicle’s aerodynamics is to look underneath. By carefully managing the airflow in this area, it’s possible to create a large amount of downforce.

Not just limited to purpose-built single seaters, it’s possible to make improvements to even mass-produced street cars if one is adventurous enough with sheet metal and carbon fiber. Typically, the goal in this case is to smooth the flow under the hood area, allowing the front splitter to work better, before the flow reaches a diffuser in the rear. A diffuser helps create downforce by slowing down the flow under the car by allowing it to expand, creating a low pressure zone which sucks the car onto the track. 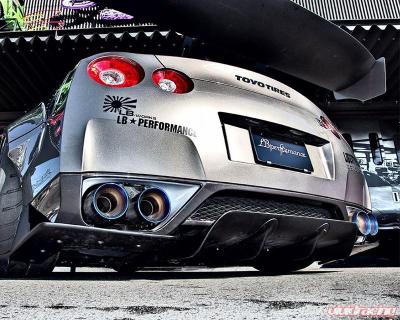 Undertrays are available for many popular sports cars. They can also be easily manufactured out of sheet metal for those eager to build their own. It’s generally hard to go wrong, with a flat undertray being better than none at all. The key is to make something easily removable for service, and not blocking off necessary flow for cooling purposes at the front of the car.

Diffusers are somewhat more complex, requiring some calculation and forethought in their design. It’s also important to either avoid placing components too near hot exhaust pipes, or to use materials that can withstand the heat. Due to their complexity and expense, they’re generally something used by the more hardcore racer rather than those just starting out.

Consider The System As A Whole

Unlike a more powerful engine or stickier tires, aerodynamic parts aren’t always a simple drop-in solution for speed. Often, it’s important to consider the vehicle as a whole when making changes to aerodynamics. For the amateur, aero mods are something best approached once one is familiar with the performance of their car on track. For example, if the car is squirrelly under brakes at the end of a fast straight, a front splitter may help. If you’re noticing a lot of understeer in high-speed corners since you fitted the new rear wing, dialing it down a couple notches might help. Considering how the parts will work with the car as a whole is key to getting the most of out any modifications made!

While this article won’t help the experienced track nut shave seconds off at Willow Springs, it should serve as a guide to the neophyte as to how various common aerodynamic mods affect performance. Knowing how and where to spend your money is a major part of building a fast car, and this series aims to help you on that quest. Good luck, and happy wrenching!

Read more from this series:
How To Get Into Cars

32 thoughts on “How To Get Into Cars: Aero Mods For More Grip”